Last week it was announced that Deeside Leisure Centre is to be transformed into a temporary 250 bed hospital in preparation for the peak of the COVID-19 outbreak.

Work began at the weekend dismantling the skate park and clearing the inside in preparation for teams of contractors to fit out the emergency hospital.

Locally people have questioned the choice of DLC as a site for a hospital, some concerned that the skate park – one of the largest of its type in Europe – has been ripped out to make way for the hospital ward.

Other questioning why locations like a mothballed former supermarket site, which has laid empty for years or unused industrial units in the area aren’t being utilised. 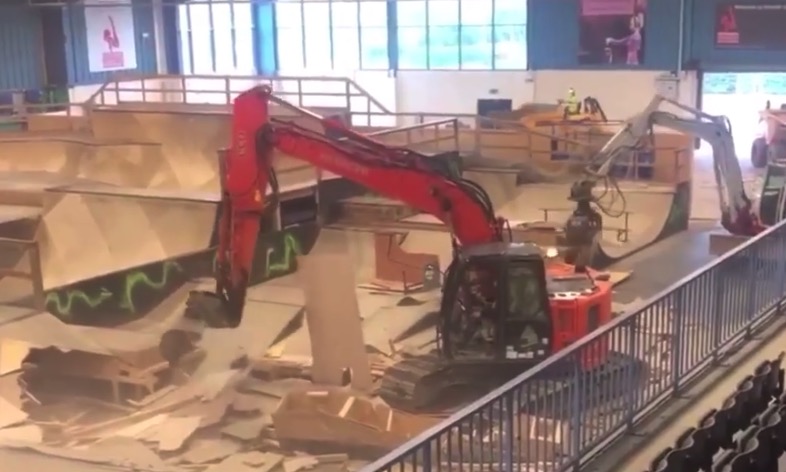 [Excavators ripped up the 1,452 square metre indoor wooden skate park at the weekend to make way for the hospital ward]

Flintshire Council has moved to answer the queries and add some more detail on the DLC hospital.

The council says DLC has been selected as it’s best available to serve the Eastern area of North Wales due to “location and accessibility by road; its size and internal layout; the availability of utilities and facilities such as accessible toilet and washing facilities.”

“DLC also has the advantage of being able to have extended bed capacity beyond the initial 250 target if needed.”

The site was chosen last week “by a team of partners including a multi-disciplinary professional team from the Health Board, the Council as the landlord, the Ambulance Service, the Fire Service and the Military, and in consultation with Aura Wales as the tenant.”

The council said: “The decision to demolish the skate park equipment was taken as the most time-efficient option to enable the principal contractor, who will fit-out the hospital, immediate access to DLC from today, Monday 6 April.”

The local authority says: “We now have the important task of transforming DLC into a temporary hospital by the end of April in readiness for the expected peak in demand for hospital admissions.”

There will be two main ward spaces, the sports hall and the skate park hall, the ice rink, which is currently in a dry condition with no ice covering, is a third space held in reserve.

The hospital will be managed by the Betsi Cadwaladr University Health Board.

Deeside Leisure Centre is the third temporary hospital to be announced in North Wales.

Venue Cymru in Llandudno will be converted to hold an additional 350 temporary beds, and Bangor University’s Canolfan Brailsford will provide a further 250 beds.

All three temporary hospitals will help prevent admissions to the Health Board’s three acute hospitals, and help patients who have received treatment at Ysbyty Gwynedd, Glan Clwyd Hospital and Wrexham Maelor Hospital to recover in order to return home. 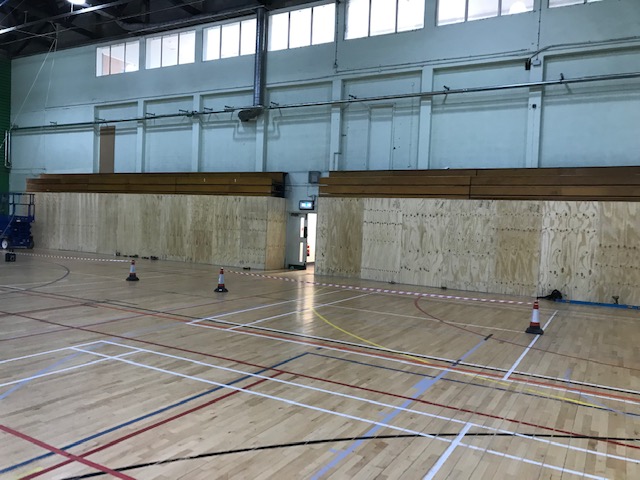 [Sports hall will be converted into a hospital ward ]

During a press conference on Friday, First Minister Mark Drakeford said the hospitals will be, “step down facilities, they will be for people who are recovering.

So some will be for coronavirus patients who are no longer infectious but are not yet fully recovered and continuing care, but they will be other patients recovering from other conditions who can be looked after in a field hospital.

Thus, freeing up the more intensive capacity that a fully equipped hospital will be able to provide.”

Speaking on staffing of the field hospitals he said, “We expect staffing to be a mixture, there will be people who are currently employed in the NHS.

There will be people from the fantastic number of people who have come forward, recently retired doctors, nurses, physiotherapists, student nurses in their final year of training, medical students who are just about to go back into go into the workforce.”

The First Minister also explained that visiting will be a decision “for those on the ground.”

DLC will be returned to full use once the emergency situation has ended.

“Aura and the Council will assess the options for the skate park hall and what can be offered in this space once the emergency situation is over.

The Council is approaching Welsh Government for financial support to reinstate DLC with new equipment for a leisure offer for the future.”

No date has been released as to when the hospital will be operational.