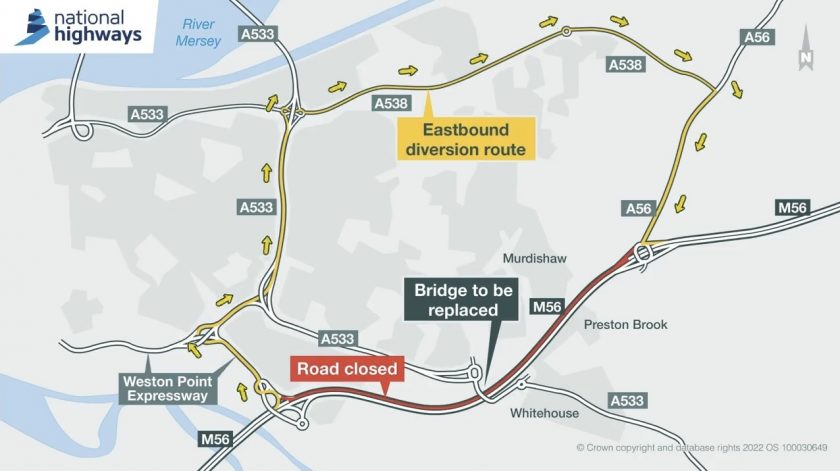 A planned closure of the M56 eastbound in Cheshire between junctions 11, Preston Brook and 12, Clifton Roundabout/Rocksavage Interchange is going ahead as scheduled this weekend – Friday 30 September until 6am Monday 3 October.

Work was to take place last weekend between junction 12 and 11 westbound (24 and 25 September) but it did not go ahead as planned due to safety concerns relating to contractors working near unstable barriers.

The work is part of the M56/A533 Expressway Bridge replacement project.

National Highways has confirmed work scheduled for this weekend on the eastbound section is going ahead, the carriageway will be closed between junction 12 and 11 and a diversion put in place.

Just a reminder that the M56 eastbound between junctions 12 at Runcorn and 11 at Daresbury is fully closed over the weekend. It is due to remain closed till 6am on Monday, 3rd October 2022. Diversion route is in place. pic.twitter.com/QTQrl3nWRi

“This is so essential work can be carried out to install new safety barriers. The closure will be in place between 9pm Friday 30 September and 6am Monday 3 October.” National Highways said.

Work to replace safety barriers on the M56 westbound between junction 11 and 12 will take place from 9pm Friday 7 October until 6am Monday 10 October.

“Delays are expected, please plan ahead and allow extra time for your journeys. We apologise in advance for any inconvenience this may cause.”

“Towards the end of October, we’ll be closing the M56 in both directions for one full weekend to lift the new bridge into position. At the same time, we’ll also need to close the A533 Expressway bridge.” National Highways said.

🔨🦺Part of our work to replace the #A533 #ExpresswayBridge.

“Clearly signed diversions will be in place. These are shown below. Motorists are asked to follow these during the closures. Please do not use satnav when following a diversion. Thank you for bearing with us.” National Highways said.