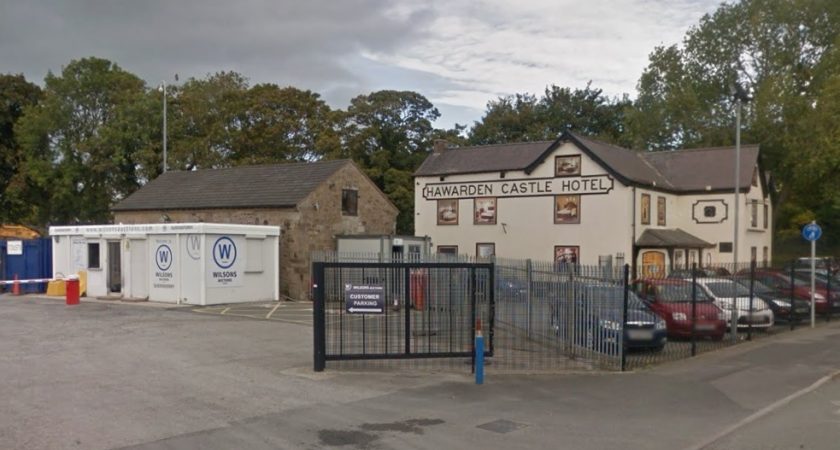 An auction company has launched an appeal after being told to stop storing cars behind an old pub in Flintshire.

An enforcement notice was issued against Wilsons Auctions in Queensferry in March for using land to the rear of the neighbouring Hawarden Castle Hotel to store vehicles for motor auctions.

Flintshire Council said the former agricultural site had been developed without permission and was considered to pose an “unacceptable” flood risk due to its location by the River Dee.

Natural Resources Wales said a new fence put up by the firm had also caused difficulties for teams responsible for maintaining a nearby flood bank.

However, the company is now attempting to have the notice withdrawn to allow the use of the land to continue.

It follows consultants acting on its behalf claiming it would allow staff to move cars in the event of a flood and reduce parking problems in the area.

In an appeal statement, they said: “The development on the land provides a betterment in terms of how the impact of any flood event at Wilsons Auctions can be managed.

“The development on the land, which is higher than the existing site, enables Wilsons Auctions to move vehicles to areas at lesser risk of flooding.

“The photos provided illustrate the extent to which the current auction site floods and the damage done to cars parked within its boundaries.

“The additional space within the auctions site allows space for the circulation of vehicles within the site and eliminates the need for customers to park on the adjoining street and cycle path.”

The company has warned it could be forced to move out of the area without being able to use the site, resulting in the loss of jobs.

The consultants said any alternative use could have a more severe impact on the land.

They added: “The enforcement notice states that the proximity of the fence erected on the land is causing operational challenges for teams who are tasked with maintaining the flood embankment.

“In response, the appellant is willing to reposition the fence on the land and/or agree access rights as necessary with NRW to enable their teams to gain adequate access to the flood embankment.”

A decision will be made on the appeal by a planning inspector appointed by the Welsh Government at a later date.