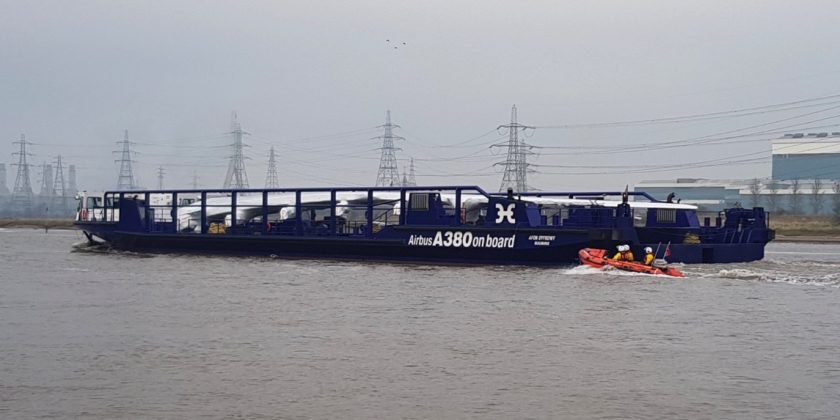 The final A380 wing left the Airbus factory in Broughton this morning.

The wing was loaded onto the barge Afon Dyfrdwy – Welsh for River Dee – using a huge motorised trolley for the customary journey along the River Dee.

The Afon Dyfrdwy, which has a maximum running speed of 9 knots, was joined by RNLI Flint Lifeboat.

The crew escorted the barge past Shotton’s Tata Steel works onwards to Flintshire Bridge and out into the estuary.

The wing will be loaded aboard a custom-designed roll on roll off ship at Mostyn Docks and transported to Bordeaux in France. 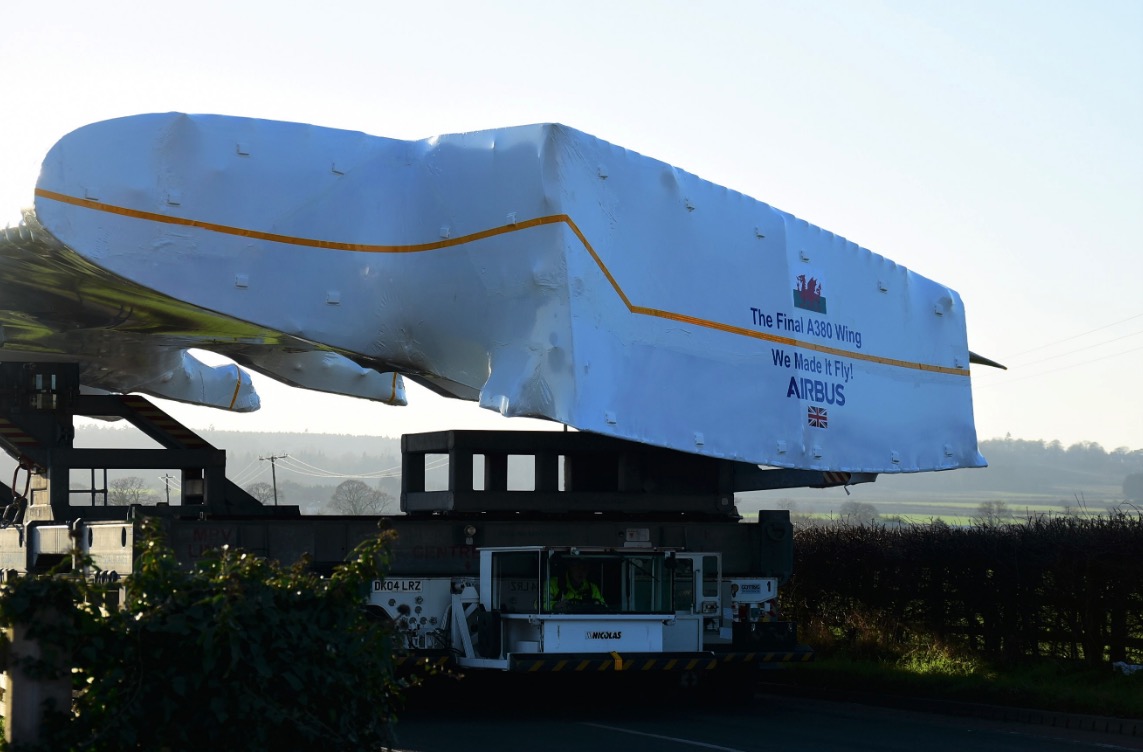 A380 wings weighs 6.5 tons and cost around £24m each, they are composed of tens of thousands of components, carrying the fuel, supporting the fuselage and channelling the power of the engines.

The Afon Dyfrdwy was built in Bromborough by McTay Marine and is one of the most specialised transport vessels ever to enter service on Britain’s waterways, it began transporting wings along the River Dee in 2004.

The iconic sight of wing and barge became a symbol of the regions engineering prowess, that has now ended with the winding up of A380 production.

[Ian Bartlett braved a very chilly morning down by the River Dee to capture the last wing leaving Deeside, he has kindly allowed us to use his photographs.]

It was February 2018 when Airbus announced it planned to put an end to the A380 programme.

With only 234 units delivered out of 313 ordered over 13 years, it is far from the break-even point – originally estimated at 1,200 aircraft over 20 years.

With orders drying up and production already running at a minimum, it was time for Airbus to stop the damage.

The aircraft is built on a continental scale: the wings are made in Broughton, engines are made in England (Rolls Royce) or the US (Engine Alliance), the fuselage and the vertical stabiliser is built in Germany and the horizontal stabiliser in Spain. Final assembly is carried out in France.

Emirates owns half of all operating A380s -the superjumbo’s future had been tied to the ongoing desire of the UAE based airline to continue adding A380’s to its fleet.

Emirates reduced an existing order by 39 aircraft triggering Airbus the pull the plug on the A380 programme.