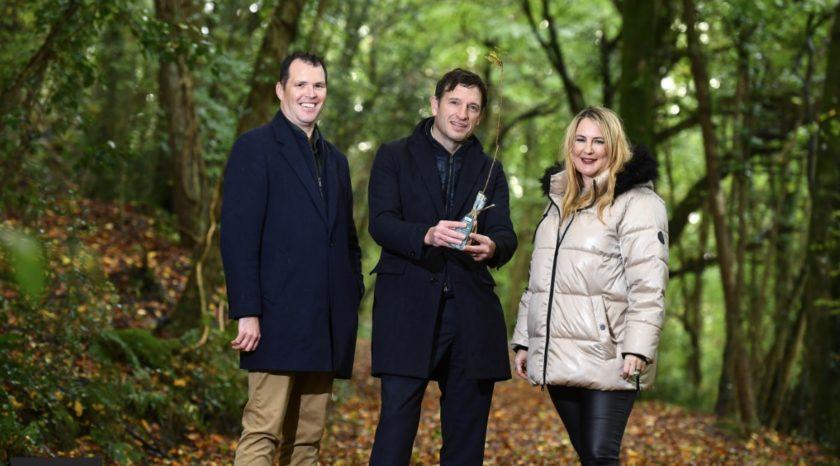 With Wales men’s national team playing in the World Cup for the first time since 1958, a unique opportunity has been created to remember the past and look towards future generations.

The FAW is urging fans to play their part in My Tree, Our Forest, the Welsh Government and Coed Cadw Woodland Trust initiative, which offers every household in Cymru a tree, free of charge.

As well as collecting a tree from one of 50 hubs across Wales to plant at home, fans can choose to have a tree planted on their behalf, contributing to the National Forest for Wales.

There are two hubs in Flintshire at Wepre Park and at Greenfield Valley Heritage Park, more details can be found on the map below by clicking on a tree icon.

With so many members of The Red Wall having sadly passed away since our last time in a World Cup, fans are encouraged to dedicate a tree to the memory of a loved one who is unable to watch Cymru on the biggest stage of all.

Cymru fan Dan Tyte is taking up the offer on behalf of his friend Alun Porter. Dan said:“In 2007, a group of us went to Frankfurt to watch Cymru play.”

“Dave Edwards made his debut that day as we hung on for a memorable draw against the Germans.”

“In typical Wales away fashion, it wasn’t just about the football and, like all of us, my friend Alun enjoyed the local culture and cuisine, including Frankfurt’s apfelwein and metre-long bratwurst.”

“Nine years later, we finally play the first match in a major tournament of my lifetime.”

“Dave Edwards was there again that day, lining up in midfield against Slovakia, but my friend Alun couldn’t be there.”

“He’d sadly passed away in 2013 from cancer.  He’d have loved to have been in Bordeaux that day, and the same is true for Qatar.”

“It feels really special to be able to do something to remember him by planting a tree in his honour in the national forest.”

Noel Mooney, chief executive of the Football Association of Wales said: “We think this is a beautiful idea, planting a tree for a loved one who didn’t get to see us in our first World Cup in 64 years.”

“It’s special and poignant and helps Cymru’s sustainability, not just today but for future generations. Those trees will help tackle the climate crisis and be around for many more World Cups to come. That’s a great legacy to leave.”

Sophie Howe, Future Generations Commissioner for Wales said: “My mum, Linda Howe, passed away a few years ago. She spent a large part of her career working in the media in sport and so she would have been covering the World Cup. And I know that she’ll be up there looking down at how Cymru is getting on. And so I’m going to be planting a tree in her honour.”

Deputy Minister for Climate Change Lee Waters said: “We want to create a national forest for Wales and that involves a movement for change. It involves all different groups and communities coming together.  We can’t just do this as a government- we need you to do your bit too. It’s great that the FAW are reaching out to supporters and giving them a personal reason to plant. It’s a lovely way to give life and allow life to carry on as well.”

Order a tree to contribute to the National Forest for Wales on behalf of a loved one here from Monday 21stNovember: woodlandtrust.org/FAW-mtof