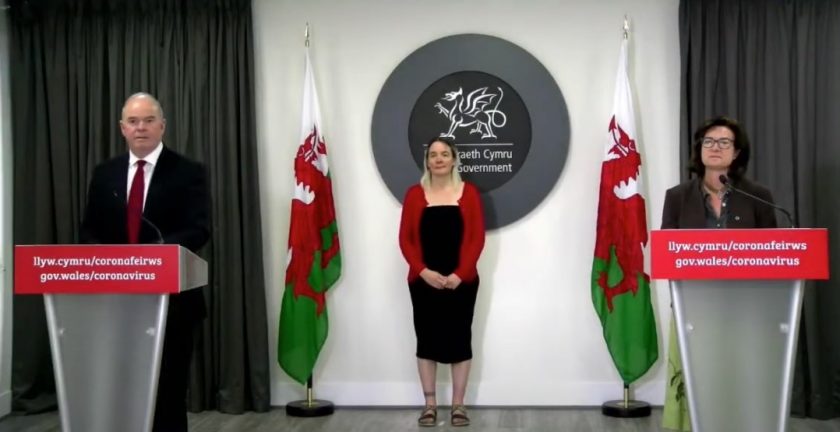 Wales’ Deputy Chief Medical Officer appeared hopeful that full two dose vaccinations will help mitigate the increase in cases Wales is seeing, and likely to see more of over the coming weeks.

The spread and impact of the delta variant was the main thrust of the update, with there now being 579 confirmed cases in Wales. Dr Jones detailed how Wales was ‘very fortunate’ in having genomic surveillance of cases so genomic analysis was possible to track and link the spread.

Dr Jones said the variant is ‘moving quickly’ with cases now observed in all parts of Wales, and “there is evidence of spread in communities”.

Today has seen another uptick in the case rate, however elsewhere in the UK it appears the impact of vaccines is altering what has previously been seen – weakening the link between a large rise in cases meaning large increases of hospitalisations and deaths.

“We are at the beginning of a third peak driven by delta and we are probably two to three weeks behind what’s happening in England and Scotland, where the delta variant has been spreading for longer.

“There are more than 70,000 confirmed cases in England and just under 5000 in Scotland, based on the experience in Scotland the risk of being admitted to hospital with Delta if you’re not vaccinated appears to be at least doubled.

“Across the UK, we’re starting to see an increase in the number of people who have been admitted to hospital, although at the moment this remains relatively low, which suggests vaccination is providing strong protection against infection and severe disease.”

“I can tell you that around two thirds of the people admitted to hospital in England were not vaccinated compared to 11%, who were fully vaccinated. But very sadly, Public Health England has confirmed 73 people have died in England after contracting the delta variant.

Later Dr Jones gave further details and commentary on the situation: “It is clear looking at the acceleration in case rates in England and Scotland, that we are in the throes of a third peak. We are behind England at present in Wales, which is very good news. So, we are in the pre-peak phase of a third wave.

“If you look back at the modelling from Swansea University in April, we are still more or less tracking at this very early stage, the most likely scenario that was identified then, but the modelling going forward is more difficult because there are uncertainties about exactly how much more transmissible the delta variant is than the previous variant.

“But the worst of those options – the most transmissible – the least vaccine effectiveness – suggests we could have still a very sizeable third peak and possibly even larger than January and that is why we are emphasising today the need to continue our precautionary approach and individuals need to continue to undertake all the measures which we know can protect them and their families and friends.”

With headlines already being written during the live coverage of the briefing regarding his comments that another peak could being larger than January we asked for clarity on those comments. To be a bit more positive we also asked what does modelling say about vaccine impact and how likely will we see high cases but low hospitalisations?

Dr Jones replied: “As I mentioned to there’s tremendous uncertainty about the modelling at present because of all the different variables which are unknown.

“So I don’t think we’re anticipating quite so many people being admitted to hospital as in January, but we are potentially at risk of lots of cases.”

The modelling referenced from April appears to be contained in this Technical Advisory Group document that contained the then updated Swansea University models. Of course they are based off old data, and in the time that has passed more information has emerged about vaccinations and variants. The modelling considered a range of vaccine effectiveness (75 – 95%) as well as the impact of new variants.

Note the below is the modelling from April and was considered as part of the April 22nd review.

You can view the full briefing from earlier today on the below video: