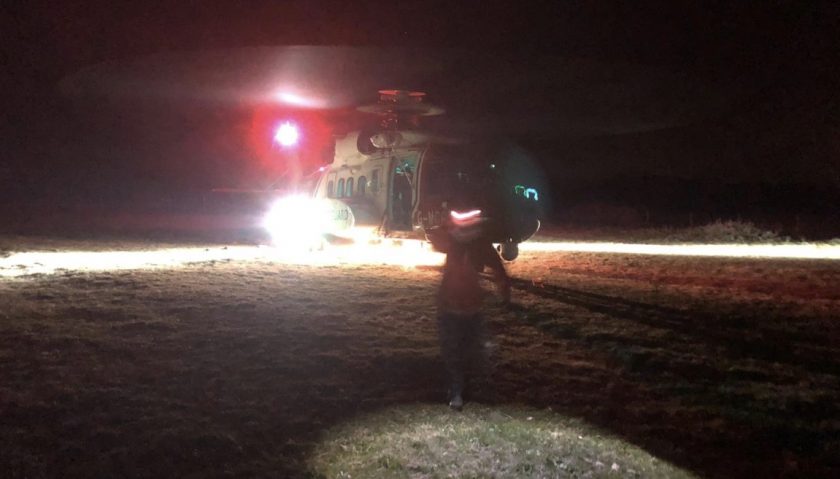 A Caernarfon based Coastguard helicopter was called out twice on Thursday to airlift injured people from the Talacre area.

A female was flown to Alder Hey hospital in Liverpool at around 5pm after she suffered a serious back injury at Talacre Beach.

A Welsh Ambulance Service spokesperson said: “We were called to an incident in Talacre at 4.12pm yesterday but quickly stood down by colleagues in the coastguard who attended with their helicopter.”

The distinctive red and white chopper was called out for a second time after a person fell from a horse on a bridle path in Talacre.

NEWSAR – the Mold based North East Wales Search and Rescue team were also called to assist with the incident.

A spokesperson for the team said they arrived at the scene at 8.45pm to “assist the Welsh Ambulance Service with a fallen horse rider near Talacre.”

They carried the patient on a stretcher to the waiting helicopter which took off at around 9.15pm for a short flight to Glan Clwyd Hospital in Bodelwyddan.

CALLOUT: On Thursday night. Assist @WelshAmbulance with a fallen horse rider near Talacre. Carried patient on a stretcher to @MCA_media helicopter for transport to hospital.
Get well soon.#muchmorethanjustmountains pic.twitter.com/3VdePbZ9kT

A Welsh Ambulance Service spokesperson said: “We were called last night, Thursday 15 April at 6.57pm to reports of an injured person near a bridleway in Gwespyr.”

“We attended scene with a rapid response vehicle and two emergency ambulances.”

“The Maritime and Coastguard Agency also supported with a helicopter.”

“One patient was taken by air to Glan Clwyd Hospital for further treatment.”