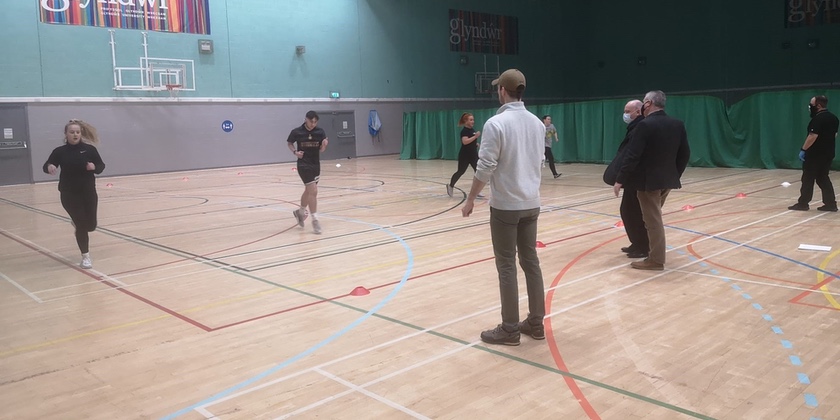 Police officers of the future at Wrexham Glyndwr have been put through their paces by the university’s Sport and Exercise Science team.

As well as gaining a degree in Professional Policing, budding officers are also required to meet certain fitness levels on joining the force.

With this in mind, the Professional Policing course leaders approached Dr Chelsea Moore of the Sport and Exercise Science department to help prepare students for their fitness test, also known as the ‘bleep test’.

Having conducted the assessments over several months Applied Sport and Exercise Physiology Lecturer Dr Chelsea Moore was able to present the findings at The British Association of Sport and Exercise Sciences (BASES) annual conference.

Coming from a family background of police officers, Chelsea said she was aware how fitness is increasing in importance to modern day policing and was happy to help students prepare so they were able to achieve the level required (which is level 5.4 on the bleep test).

She said: “When the Professional Policing degree was introduced, the department approached me for help in supporting students in through their personal safety training process.

“We put on some practice sessions to get them familiar with the bleep test, three sessions throughout the year.

“What we were looking for was attendance – were regular attendees doing better, is there a difference in their fitness level?

“The students have to go through checks, and visits from an occupational therapist to determine if they are healthy enough to join the force – they look at their BMI (Body Mass Index). If it’s over a certain limit they won’t even make it to the fitness test element.

“We may look at whether some students need some sort of dietary intervention as well.

“What we found with the majority of them is that their BMI’s were fine. However, some students were unable to achieve the required level of the bleep test in order to gain entry into the police. A level of 5.4 is reached within 3-4 minutes.

“What we found is that attendance at the sessions declined over time, possibly because a lot of those who attended the first sessions found they were already getting to the required level, and thought their fitness was fine so didn’t need to come back.

“We also found some of them weren’t getting to the level, which was concerning. The onus is on students to keep fit.”

But even the students who may not have been considered fit, found that on the day of their assessment they were motivated and able to achieve the level, with Chelsea adding that in some cases, psychological hurdles also need to be overcome.

“To assess fitness we need to look at how well the body can extract oxygen from the atmosphere”, she said.

“Some psychological barriers are reported in some students and serving officers – possibly because it is a test situation. In reality, there’s no situation where a police officer would be asked run back and forth between two cones.

“The psychological barriers have to be taken into account. Some serving women officers don’t necessarily want to do these tests in front of other people, for fear feeling embarrassed.

“With the students, we noticed little difference from session to session in terms of fitness, so now it’s a case of looking at what we can do further to support the students who need an intervention of some sort. We want to compare whether the bleep test is reliable as a fitness test, and compare it to testing their actual fitness.

“A career in the police is exciting but I don’t know if some young people realise that to get in you need a required level of fitness, the job itself is demanding. A lot of young people don’t do much exercise, are sedentary, and don’t eat healthily. To change habits is quite difficult, especially if you’re starting a university degree, away from home.

“In order to look at their fitness and not whether they have just become familiar with the test we are going to look at heart rate, put monitors on the students, looking to see if the rate is lower per level of the bleep test – whether there is a physiological gain.

“I presented the findings at the BASE conference, and have been asked to get involved more with North Wales Police and current serving officers. In 2013 they made it compulsory for current serving officers to complete the bleep test annually. This is more important for young recruits – knowing it’s not just about getting into the police it’s about maintaining that level of fitness throughout your career and life.”

More information about the BSc (Hons) Applied Sports and Exercise Sciences Degree at Wrexham Glyndwr, can be found here.