M56 westbound in back open 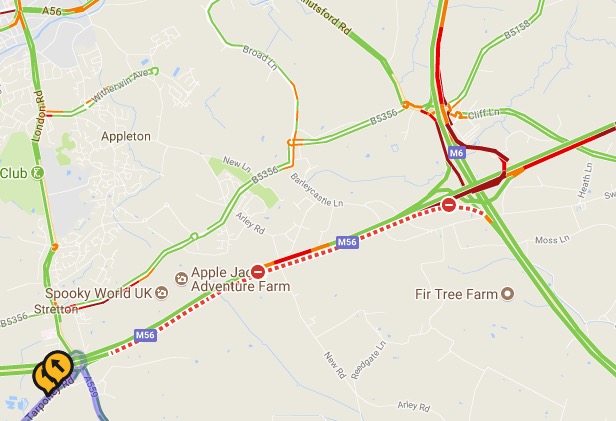 The M56 westbound between junction 9 and 10 is now back open following the earlier closure caused by a collision.

M56 Westbound closed, queueing traffic due to accident, one van involved between J9 M6 (Lymm Interchange) and J10 A49 (Stretton). Full closure was put in place at 13:05 to allow emergency service deal with the accident. At around 12:55 traffic was held to allow an Air ambulance attend to the scene. Diversion: Traffic should follow the solid black triangle symbol. Via the M6 Northbound at J20/A50 roundabout. Take the A50 on to the B5356 Westbound towards Stretton. Traffic should then use the A49 South to re-join at J10. ‌﻿​﻿‌﻿‌﻿‌﻿​﻿‌﻿‌﻿‍﻿‌﻿​﻿‌﻿‌﻿‌﻿​﻿‌﻿​﻿‍﻿‌﻿​﻿‌﻿‌﻿‌﻿​﻿‌﻿​