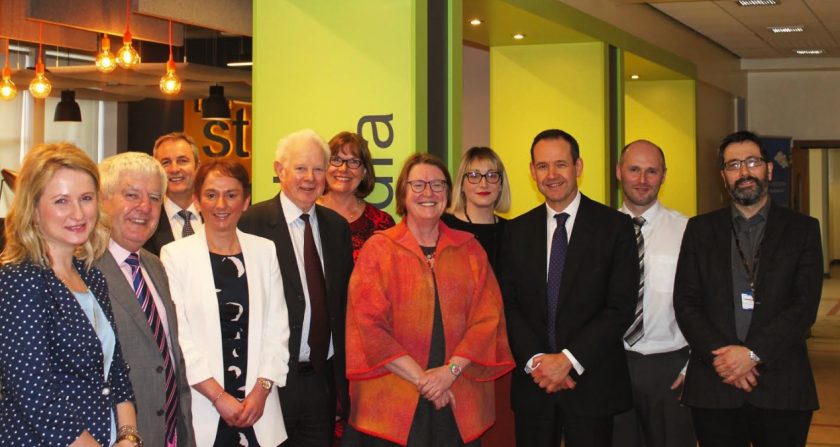 Senior academics at Wrexham Glyndwr University have welcomed the publication of a report on the future of the justice system in Wales.

The report was written by a commission headed by former Lord Chief Justice Lord John Thomas of Cwmgiedd, and based on evidence submitted by organisations, academics and experts from across Wales and beyond.

Other evidence taken by Commissioners included a meeting at  Wrexham Glyndwr University where the commissioners spoke with both students and staff.

Their evidence addressed a  range of  issues and drew on specific research they had undertaken, such as studies into homelessness among prison leavers and substance use – as well as other areas including youth custody, the Welsh language and the future for justice in North East Wales.

Following their session at Glyndwr, the Commissioners continued to gather evidence across Wales and beyond– visiting a series of other universities as well as speaking with justice professionals, third sector organisations, and more.

The resulting report was delivered to the Welsh Government this month, making a series of immediate, short-term and long-term recommendations.

These included a recommendation that Wales should have full control of its own justice system and powers over police, probation and judges; a new Welsh Government department which would be responsible for justice matters; the devolution of a range of measures related to justice which touch on existing Welsh Government policy – particularly with regard to crime and harm reduction; and the raising of the age of criminal responsibility from 10 years old to 12.

The full range of recommendations can be found in the report which is online here:  https://gov.wales/commission-justice-wales-report

The Glyndwr academics who took part in the Commission’s research have praised the report and the proposals it puts forward for the Welsh justice system.

Professor Madoc-Jones said: “We welcome this report – and its recommendations that Wales should have parity with Scotland and Northern Ireland  and take full control over its criminal justice system.

“At present, coordination between devolved and non-devolved bodies is poor and policies imposed on Wales are driven by  an obsession with imprisoning ever larger numbers of non-violent offenders, those with mental health difficulties or who are homeless.

“This report shows that across Wales there is a belief that we can do much better than this to ensure fewer people are victimised in the future.”

Find out more about Wrexham Glyndwr University’s BA (Hons) in Criminology and Criminal Justice – rated third in the UK for criminology in the Guardian University Guide 2020 – here: https://www.glyndwr.ac.uk/en/Undergraduatecourses/CriminologyandCriminalJustice/

Oliver Twist is coming to the Storyhouse in Chester this Christmas

“My coach said I run like a girl, & I said if he ran a little faster he could too” Mia Hamm - American football player. Year 5 & Year 6 girls, we are looking for new players this season, why not pop along to one of our sessions 👇🏼 Fresh air, fun, fitness & teamwork ⚽️💛🖤⚽️