Row breaks out over rising cost of Flintshire school redevelopment 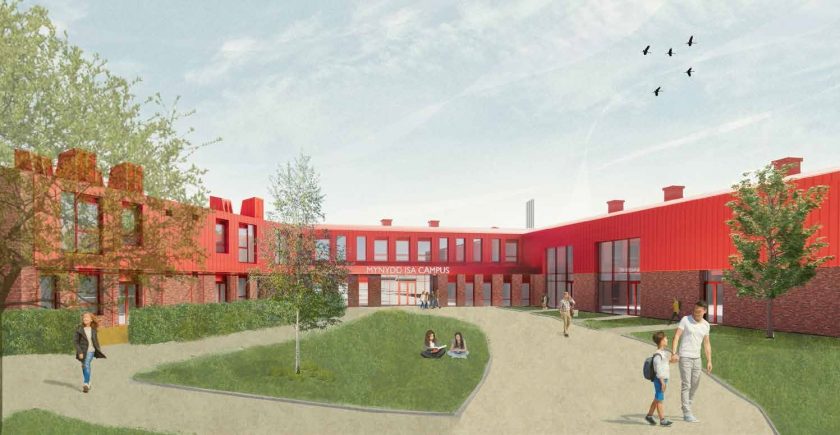 A row has broken out between rival politicians over the rising cost of redeveloping a secondary school in Flintshire.

Flintshire Council’s plans to build a combined primary and secondary school campus at the Argoed High School site in Mynydd Isa, near Mold, were placed under the spotlight during a meeting at the end of last week.

The project would see existing buildings demolished to allow Ysgol Mynydd Isa primary school to relocate to the site.

Concerns were raised by opposition councillors after a recent report showed the proposed facility for around 1,300 pupils was facing a potentially significant increase in costs.

The Mynydd Isa Campus development is due to be funded through the Welsh Government’s Mutual Investment Model (MIM), which sees private firms contracted to build and maintain public assets.

Created as an alternative to controversial private finance initiative (PFI) deals, it will require the council to pay an annual charge similar to a rent payment for a period of 25 years.

Due to the soaring price of building materials and supply chain issues, that sum has risen by around £336,000 per year, meaning the local authority could have to pay nearly £1.2m towards the scheme annually.

Blows were traded between political opponents after the 22-member independent opposition group “called-in” the Labour cabinet’s decision to progress with the funding arrangements.

Speaking at Friday’s (July 29, 2022) meeting, independent councillor Richard Jones said: “I signed this call-in notice because I’m not convinced it is particularly good value for money for Flintshire or Wales in fact.

“This is due in part to the increases that have come about and the lack of member involvement.

“There’s a ramping up of the charges that are going to be incurred by the council and also from Wales too.

“In terms of the total cost this project, it’s my understanding it will be in excess of £169m overall over the 25 years.”

He expressed concerns that Flintshire was being used as a “guinea pig” for the new funding model.

Council officials have repeatedly dismissed comparisons between MIM and PFIs, which were abolished by the UK Government in 2018 for failing to deliver value for money.

A previous report estimated the authority would need to pay a service charge of £681,000 for the 2026-27 financial year, but that figure has now risen.

The council’s chief education officer said earlier this month it was hoped an agreement could be reached for the charge to be capped at £1m.

Council leader Ian Roberts defended the costs at the meeting and questioned why his opponents had not challenged the decision earlier.

He told members of the backbench education, youth and culture scrutiny committee:  “It’s very sad that so far in this debate and in the call-in notice, there has been no mention whatsoever of the young people who attend the schools in Mynydd Isa.

“Let’s remember that schools are about education and they’re about quality education provision for the young people of Flintshire.

“There has been regular reporting of the school modernisation programme to overview and scrutiny and cabinet, and it is astonishing that it has taken until now for members to realise that this was going on.

“You would have thought given the concerns which have suddenly arisen today, that there might have been a call-in on the numerous occasions where cabinet have made decisions.”

Officials said it was anticipated the final annual service charge could be lower than predicted.

It was also warned the authority would be charged a fee of £2.7m if it decided not to pursue the scheme.

Former Labour cabinet member Bernie Attridge was among those who challenged the rising cost of the project.

Now leading the main independent group, he took exception after Cllr Roberts highlighted his previous support for the redevelopment.

He said: “He’s commented that I said in 2018 that I supported the scheme.

“He’s absolutely correct, but what’s different here before us today is that what we were told it was going to cost in 2018 is now 74 per cent more.

“That’s the issue for the call-in because of the excessive amount that the scheme has gone up by.

“You’re right, Cllr Roberts, but 2018 was nearly five years ago and as you know, lots of things change in five years.”

Labour’s Ted Palmer said he had been left upset during the debate after some councillors were seen laughing while others were talking.

It led to a reminder from Labour committee chair Teresa Carberry for members to show respect to one another.

He said: “Although we seem to have caused a lot of angst by calling the item in, I think the changes that have happened since 2020 to 2022 give us the right to do that.

“When you find something that increases in cost by £12m over 25 years, you need to then reassess whether you’re getting good value for money.

“I think it’s unfair to accuse us of mischief-making and I did take exception to that comment.”

He called on senior councillors to reconsider their decision to proceed with the financial agreements for the project.

However, the committee chose by eight votes to four not to refer the decision back to cabinet members.