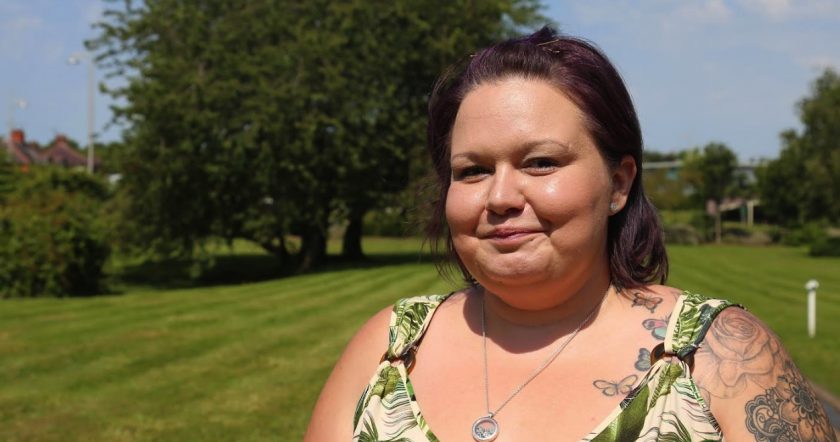 A student who made a life-changing decision to study at Wrexham Glyndwr University and boost her career prospects is urging others it is not too late to apply – and has passed the adviceon to her own family!

Gemma Whitehead, who lives in Oswestry, is advising anyone considering making a bid to apply to the university for September entry this year to do so.

As a result of Gemma’s decision last summer, she secured a place on the university’s BN (Hons) in Adult Nursing shortly afterwards – and has now completed the first year of a three-year degree course which will set her on the road to the career she has wanted all her life.

She said: “It was just one of things – a friend I used to work with told me about Glyndwr and their nursing programme – I was curious and had a look at the website – and here I am.

“I didn’t think I would stand a chance applying – this was August – but put my application in anyway. I then got a phone call, asking me to come in for a face-to-face interview – and shortly after that interview, I heard I’d been accepted!

“I’ve enjoyed my first year here at Glyndwr so much, I recommended to my sister she follow my lead and apply – and she’s just heard she’s been offered a place too. She’s very excited!”

In the twelve months since securing her place, Gemma has already begun clocking up some of 2,300 clinical hours Adult Nursing students are expected to reach as part of the three years their studies at Glyndwr cover.

She said: “Before this, I’d mainly worked in the care sector –I was a residential manager in a domiciliary care home.

“Since I started as a nurse, I have worked in a care home once more – but also in the vascular and respiratory departments at the Royal Hospital Shrewsbury and in the Midland Centre for Spinal Injuries at Gobowen.

“I have always wanted to be a nurse, ever since I could remember. I’m bringing up three children, so I’d always been putting it off – but I just thought ‘it’s about time I did something for me’ and applied.”

One area which has proved a boon for Gemma whilst she has been studying at Glyndwr over the past twelve months has been the level of support each student on her course has been offered – something which helped to put her mind at rest after she began her course with concerns about returning to learning.

She said: “It has been much better than I expected it to be coming to university. As I’m a more mature student, and I haven’t been in education for a while, I was concerned about how I was going to get on with academic tasks like writing essays – but the support has been great!

“Compared to other universities I looked at in the area, where there are hundreds of people on each course, Glyndwr is much friendlier – everybody on my course is so close. My lecturer is on hand with any queries we have too – we can get in touch with her with our questions and she’ll always reply as quickly as she can.”

Gemma is now keen to encourage anyone who is still considering their study options for this year to make the most of their time – and to remind them there’s still time to apply and secure a place on a course this autumn.

She said: “It is never too late to think about applying – this time last year, I hadn’t even applied, and I wasn’t sure if I would get a place – but I did, I’ve done it, and I am looking forward to my second year. ”

Senior lecturer in Adult Nursing, Angela Williams, said: “It has been great working alongside Gemma and her experience shows it is never too late to apply – if you are thinking about studying with us here at Glyndwr, pick up the phone, go online or come to one of our Open Days – whichever you pick, you’ll get friendly, one-to-one advice.”

If you’re interested in finding out more about studying at Wrexham Glyndwr University, there are Open Days on both Saturday August 17 and Saturday September 8 – to find out more about the varied programme of events and experiences available at each, visit: wgu.ac.uk/openday

Oliver Twist is coming to the Storyhouse in Chester this Christmas

“My coach said I run like a girl, & I said if he ran a little faster he could too” Mia Hamm - American football player. Year 5 & Year 6 girls, we are looking for new players this season, why not pop along to one of our sessions 👇🏼 Fresh air, fun, fitness & teamwork ⚽️💛🖤⚽️