Update: River Dee rescuers say whale has restranded and there are no ‘signs of life left’ 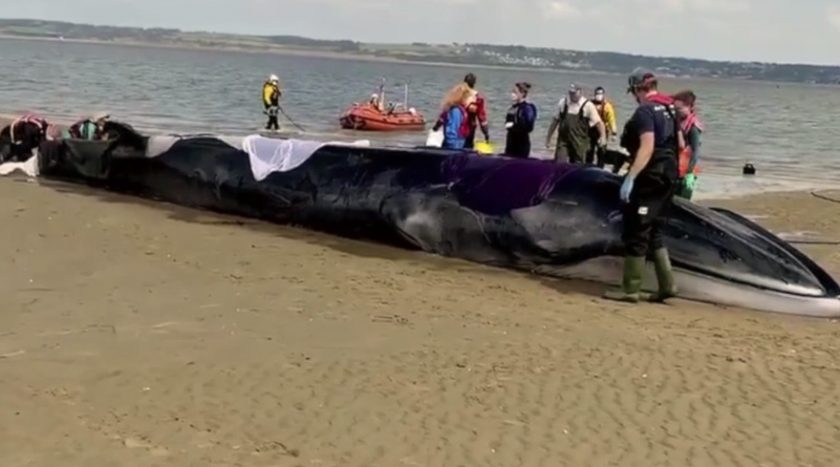 British Divers Marine Life Rescue [BDMLR] have said the 30 ft whale which has been stranded in the River Dee has died.

The fin whale restranded late last night on a sand bank near the Dee estuary mouth on the outgoing tide, but BDMLR said it was “far too dangerous to send anyone out there to see if it was still alive.”

A drone was brought in to monitor the 14 tonne whales breathing but there are no signs of life.

A spokesperson said: “It has been found stranded once again this morning and a team from the Coastguard and a licensed drone pilot with permission to fly the area have been observing it from a distance.

Sadly, though expected, there appear to be no signs of life left.

Once again we would reiterate that members of the public must abide by Covid-19 guidelines against gathering in groups and in Wales there is a 5-mile travel limit still in force too.

The area is extremely dangerous due to tides and quicksand and we would strongly urge that people must not enter the estuary in any kind of attempt to get near it and put themselves in unnecessary danger.

Nobody has any need or reason to go near it now except for the authorities from Natural Resources Wales who are now involved with retrieving the body.

We are in contact with our colleagues at the Cetacean Strandings Investigation Programme- UK strandings regarding the possibility of a post mortem examination that may be able to take place to help us all learn more about this animal.

Once again we would like to extend our thanks to everyone who has been involved with this harrowing ordeal over the last couple of days, but also for the huge amounts of public support that the team have received from you all both in person and online.”

The British Divers Marine Life Rescue is a charity relies heavily relies on donations to carry out the work and training it does to help marine mammals all over the UK.

Donations can be made on JustGiving via the following link: https://www.justgiving.com/bdmlr?fbclid=IwAR3YLArmX1C9BO0TxVmQqJvuKbtvByI77z9ZCAaZCVHFKNhXbG-TNB2GCiw