Flintshire schoolboy and friends raise over £9,000 after freak accident in a park 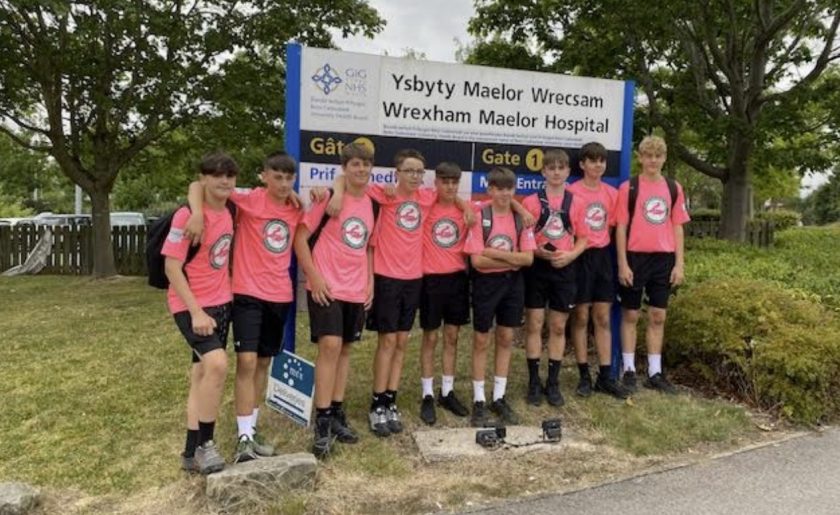 A Flintshire schoolboy and his friends have raised an incredible £9,200 for three important causes that came to his aid after he suffered two fractures to his skull after a freak accident in a park.

In June Cory Pygott, 14, was out with his friends, when he came off a swing and was knocked unconscious after he banged his head on a metal bar.

Following his accident an ambulance and air ambulance were sent to assist Cory, it was then decided that due to Cory’s condition that another air ambulance with a consultant on-board was needed.

Despite initial fears that Cory would need to be flown to the Royal Stoke University Hospital or Alder Hey Children’s Hospital, he was stable enough to go straight to Wrexham Maelor Hospital in a road ambulance.

The group walked 14 miles from the scene of the accident at Argoed Park to Wrexham Maelor Hospital in aid of the Wales Air Ambulance, Welsh Ambulance Service and the hospital’s children’s ward.

Cory’s proud dad, Stephen, said: “Cory is now 100 per cent better. The walk went really well and we are all very proud of the boys.”

“They raised more than £9,200 which is a fantastic sum that will be going to the ambulance service, Wrexham Maelor Hospitals children’s ward and the amazing Wales Air Ambulance.”

Reflecting on what happened on the day, Cory from Mynydd Isa, said: “It was severe to the point where if my friends and the north Welsh Ambulance Service hadn’t acted as quickly as they did, I’d be in a lot more serious condition.”

“I was bleeding from my ears and was unconscious, they rang 999 and made sure I wasn’t choking on my tongue and put me in the recovery position.”

The family are extremely grateful to his schoolfriends for helping save Cory’s life, his friend Yazmin Richardson stopped him from choking by getting his tongue out of the back of his throat, another friend Clément put him into the recovery position.

James and Ieuan ran to Cory’s house in the village where his sister Lucy, 16, was at home.

Lucy got help from the family’s friend Des, who took them all back up to Cory.

Yasmin and Clément also went to get help, whilst Ben, 13, stayed with Cory, whilst on the phone to the emergency services.

Cory’s dad, Stephen, said: “I want the children to get the recognition they deserve. They really stepped up at such a young age.”

“The ambulance and paramedics were by Cory’s side within 10 minutes, closely followed by the first air ambulance and then the second air ambulance arrived, which had a consultant onboard who would’ve been able to put Cory into an induced coma. ”

“Thankfully, Cory showed signs of improvement and went to Wrexham Maelor Hospital in a normal ambulance.”

“The Wales Air Ambulance is something you know is there and it’s a vital thing to have but after Cory’s accident we appreciate the air ambulance more than ever.”

Debra Sima, Community fundraiser for the Wales Air Ambulance, said: “The boys should be incredibly proud of the amazing amount they’ve raised for three important causes – we can’t thank you enough.”

“Despite recovering from two fractures to the back of his skull Cory’s first thought was to raise funds for the services that helped him, which is inspirational. It is wonderful to hear that he has gone on to make a full recovery.”

“Thank you to everyone who took part or donated to the boys fundraiser. You’re all helping the Wales Air Ambulance continue to be there for people when they need our help.”

In December 2020, Wales Air Ambulance Charity achieved its aim of operating a 24/7 service.

Wales now has access to the service’s Emergency Department-standard critical care around the clock and to keep the helicopters in the air, the Charity needs to raise £8 million every year.