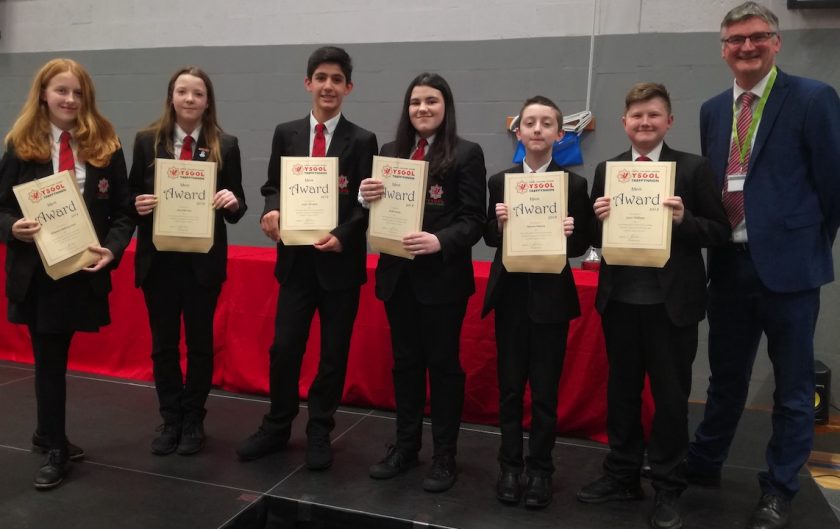 Awards for academic excellence, personal achievement, and contribution to the local community were presented to outstanding students at Ysgol Treffynnon’s annual prizegiving ceremony.

In front of a packed audience of parents, family members, governors and staff, more than sixty students from all year groups received recognition for their hard work over the previous academic year.

All the awards were decided upon by each subject faculty and pastoral staff via a committee discussion.

The John McBrien Memorial Awards for academic/artistic excellence as well as sporting excellence were presented to Nathan Hall and Ellice Gallagher.

John was an ex student at Holywell High School and was in the sixth form when he tragically died at Hillsborough in 1989, aged just eighteen.

In the summer term the school also runs a memorial five-a-side football competition for local primary pupils in John’s name.

Winning the Chair of Governors award for ‘Best Progress File Document’ in year 11 were Alexandra Barker and Mabli Kadelka-Williams.  Merit awards for outstanding effort in punctuality, attendance, appropriate behaviour and academic progress over the year were

were presented to forty-nine students.

The HE Jones Memorial Trophy in memory of a member of staff, Huw Jones, an enthusiastic walker and advocate for outdoor learning activities, was presented to Kieran Roberts for outstanding abilities in outdoor education.

Members of staff were also recognised at the ceremony. Helen Franklin and Siobhan Henry received the Gwobr Goffa Ffion Lloyd Ellis Award for Staff in memory of the former teacher, for making an exceptional contribution to the achievement of outstanding academic results. Bethan Price received the Ysgol Treffynnon Support Staff Award for her contribution to supporting students and colleagues.

Guests were entertained during the evening with a performance of Pachelbel’s ‘Canon’ on flute by Bethan Gregory and Sophie Stokes, and the school choir sang ‘Hallelujah.’

John Weir, headteacher, welcomed everyone to the event.  Mark Evans, Vice Chair of the Interim Executive Board (IEB), gave a governors’ address and explained the significance of the awards and the memories they will hold, not just for the students but for their families too.  Mark Seale, Director of Learning for Academic, compered the evening.

Ben Edwards, head boy, and Serena Boybay, head girl, gave a keynote speech about the importance of achievement.  They spoke about the fact that every student has their own personal strengths and how the prizegiving ceremony celebrates this.

In his concluding speech, Mr Weir said: “It is fantastic to see the amazing achievements of our students in all areas of school life and in their support of the local community.

The prizegiving ceremony is a highlight in our school calendar and I would like to thank everyone for attending and celebrating this very special evening with us. I also wish to thank staff for their hard work and commitment, and parents and families for their ongoing support.”