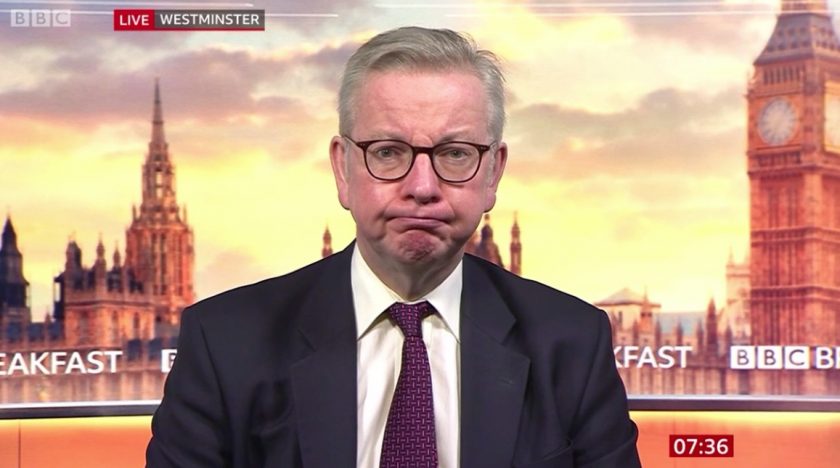 The firebreak in Wales between October 23  and November 9, saw non-essential shops and hospitality venues close, indoor household mixing was banned.

Secondary school pupils from year 9 upwards were also given an additional week off following the half term holiday.

On Monday he announced that new restrictions will come into effect in Wales on Friday preventing pubs, bars, restaurants and cafes from serving alcohol and forcing them close at 6pm.

The new restrictions will come into force just three weeks after the end of the the Wales wide firebreak as cases begin to rise again.

Mark Drakeford said on Monday: “We’ve seen further rises amongst the under 25 age group in 17 of the 22 local authority areas in Wales, and more worryingly still, cases of coronavirus are beginning to rise in the over 60 age group in most parts of Wales.”

Speaking to BBC Breakfast this morning, Michael Gove said: “I’ve got enormous sympathy with the difficulties that the Welsh government are wrestling with.”

“It looks, with the benefit of hindsight, as though immediately after their two-week lockdown they lifted restrictions too expansively.”

“As a result of doing that, the virus once more got out of control, they’ve had to slam the brakes on again.”

“That’s one of the reasons why we’re exiting the lockdown cautiously across the country (England).”

“We are taking a cautious approach (in England) because the example of Wales shows what can happen if you lift the restrictions in too blanket a way too soon.”

Inan interview with Sky News on the subject of England coming out of the four week lockdown, Mr Gove again pointed to Wales, he said:

“It’s always easier to move an area from a tougher tier to a lower tier once we’re confident that the infection is under control, rather than relaxing things and then having to put the brakes on again as we’ve seen in Wales.”

“In Wales they had a two week lockdown … I think the Welsh comparison shows what happens when you pull the restraint back to far.”

“The lesson from Wales, which we’re all watching, we have friends and relatives there, is that too rapid a relaxation means that you have to slam the brakes on again and the one thing that we all want to avoid is another national lockdown (in England).”

The hospitality industry has reacted angrily to the new measures in Wales.

The 6pm curfew and ban on serving alcohol on all 3,227 pubs in Wales will “destroy the sector,” Emma McClarkin, Chief Executive of the British Beer & Pub Association said.

Ms McClarkin said: “Evenings are the key trading period for pubs and enjoying a beer, with or without a meal, is one of life’s simple pleasures – forcing pubs to close at 6pm and banning alcohol sales all but closes them down in reality.”

“When you factor in that December, with the festive season, is the most important time of the year for pub goers and our sector, this really couldn’t come at a worse time.”

The first minister has been banned from every pub in the West Conwy after licensees said new restrictions on hospitality would damage their businesses.

members of the West Conwy Pubwatch scheme have decided Mr Drakeford will not be able to enter their premises.

In a letter directly addressed to the First Minister, landlords said his actions amounted to “anti-social behaviour” and the ban would be put in place with immediate effect until May 2022.

The Valley Hotel on Anglesey has separately labelled Mr Drakeford as “the Christmas Grinch” after deciding to shut its doors until further notice. 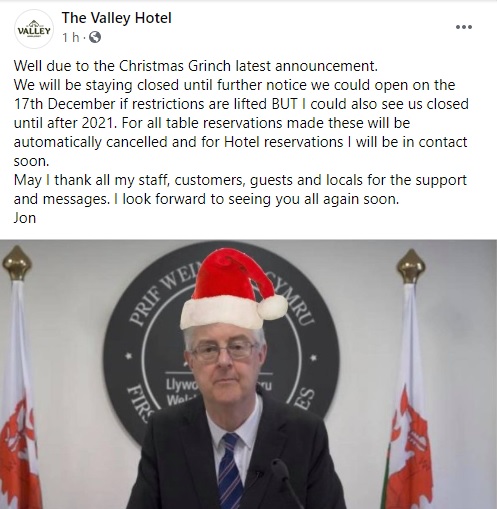