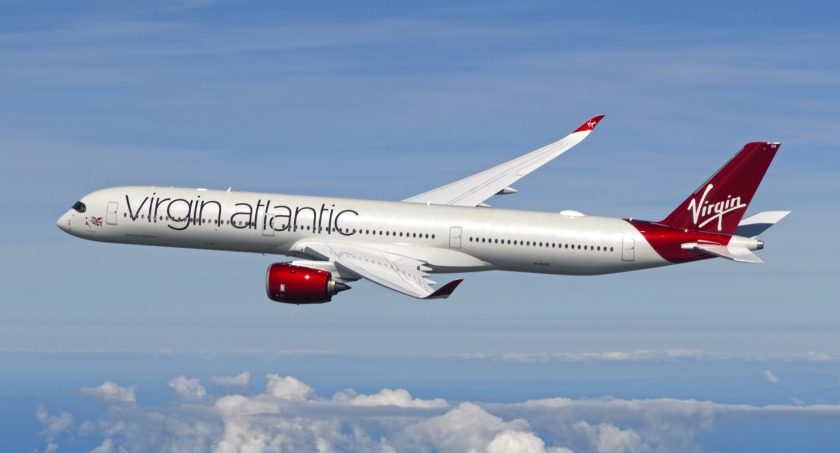 The passenger jet was Virgin Atlantic’s brand new Airbus A350-1000 which had taken off from Gatwick airport.

It was joined by two Hawarden based Strikemaster military jets, a familiar sight for many in Deeside during the summer months.

On board the vintage Strikemasters were two of the best aviation photographers in the business who were geared up for a very special photoshoot 9000ft above the region.

I love it when a plan comes together. Textbook shoot today with @BlickyIan @StrikeDisplayUK over North Wales with a BIG customer. #AvGeek #aviation #aviationlovers #aviationphotography pic.twitter.com/zlPSGQVoJK

Ian Black and Jamie Hunter, both former RAF pilots, hopped on board the two Strikemaster’s – which are maintained by North Wales Military Aviation Services (NWMAS) at Hawarden – and flew from the Flintshire airport to rendezvous with Virgin Atlantic’s stunning new Airbus A350-1000 named Red Velvet.

The two photographers were commissioned by Virgin for the shoot which took place in the skies above the North West of the region for around an hour.

[Flightradar24 shows the position of a Strikemaster military jet as it trails Virgin Atlantic’s new Airbus A350 as they head towards Flintshire, all three aircraft involved have strong links to Deeside]

The shoot, which took six months to plan, promises to deliver some fantastic images once published – the photograph featured above is taken from the set shot on Saturday and was sent to Deeside.com by Virgin Atlantic.

Ian Black said: “It was great to do the shoot over North Wales – I’d been based at RAF Valley so chose the area as it has a fantastic backdrop.”

Not a classic formation but proud to have been the photo ship for the brand new @VirginAtlantic #A350 ! @jamie_aviacom took this fantastic photo with @BlickyIan in 425! We’re are based at Hawarden where these beautiful wings are made @AirbusintheUK @OllieSuckling @BAESystemsAir pic.twitter.com/0xsQ5LVXYs

Virgin’s first Airbus A350-1000 – G-VLUX, takes to the skies on Tuesday for its very first revenue flight.

It will fly passengers from London Heathrow to New York JFK

Three more A350s, Mamma Mia, Rain Bow and Queen of Hearts, will join the airline’s fleet by the end of 2019 and all four aircraft will initially fly between London and New York.

Los Angeles will be the second Virgin Atlantic destination to receive the airline’s new A350, from next year.

[An A350 wing being assembled at Airbus Broughton]

The A350 wing, Built at Airbus Broughton incorporates the very latest features of wing design and has been developed using over 4000 hours of wind tunnel time.

The result is one of the most efficient wings ever built.

Opened in 2011 the North Factory houses the A350 line and is the most recent of the Broughton wing production buildings.