Flint Coastguard is urging the public not to “risk your life to take pictures at the coast” during this week’s stormy weather.

A large Atlantic low pressure system, named Storm Brendan by the Irish meteorological service Met Éireann, is bringing very strong winds to many parts of the UK over the next couple of days.

The Met Office has issued a yellow wind warning which comes into force in Flintshire on Tuesday from 12pm to just before midnight.

Media outlets such as the BBC encourage members of the public to take photographs of the weather and upload them to their website.

Flint Coastguard has issued a warning to those who maybe tempted to go and take photographs of stormy weather conditions by the coast. 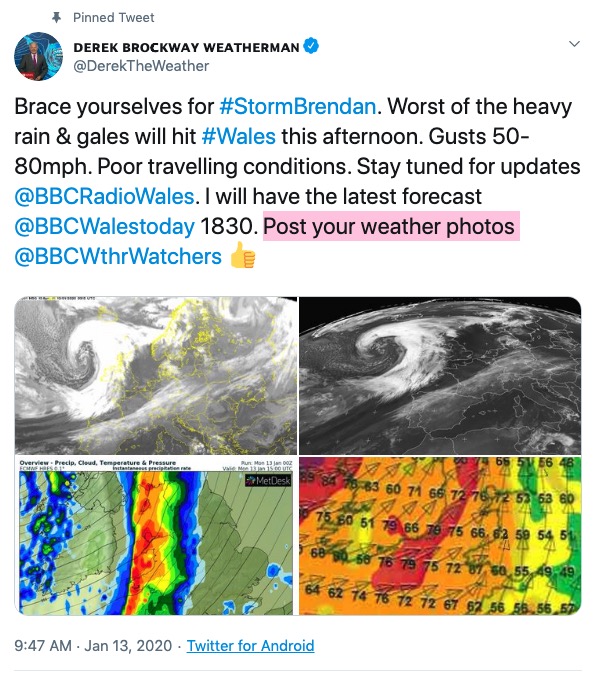 A spokesman for the Flint based rescue team said: “Very strong winds of up to 70mph in exposed places such as coastal areas are likely.

Storm Brendan will bring strong winds across parts of the UK throughout Monday and Tuesday.

Stormy weather might produce breathtaking photographs but it might be the last breath you ever take if you’re there at the wrong moment.

With parts of the UK set to be battered by strong winds this week, please don’t risk your life to take pictures at the coast, however dramatic it looks.

We advise the public to avoid exposed coastal areas during times of severe weather.

Don’t take risks, but if you do get into trouble or see someone else in difficulty on the coast, dial 999 and ask for the Coastguard.”

Locally the storm is set to peak on Tuesday at around 5pm.

Met Office Chief Meteorologist, Frank Saunders, said: “It’s going to be particularly windy across the western half of the UK, with gusts reaching 60-70 mph along Irish Sea coastlines, the west of Scotland and perhaps some English Channel coasts – maybe even 80 mph in a few exposed places.

This is likely to cause some disruption to sea, road and air travel.

As Storm Brendan moves eastwards, strong winds will also develop across eastern parts of the UK, particularly northeast Scotland where there is also a wind warning in place.”

As well as strong winds, there will be large coastal waves in western areas, so bear this in mind before heading out in these regions.”