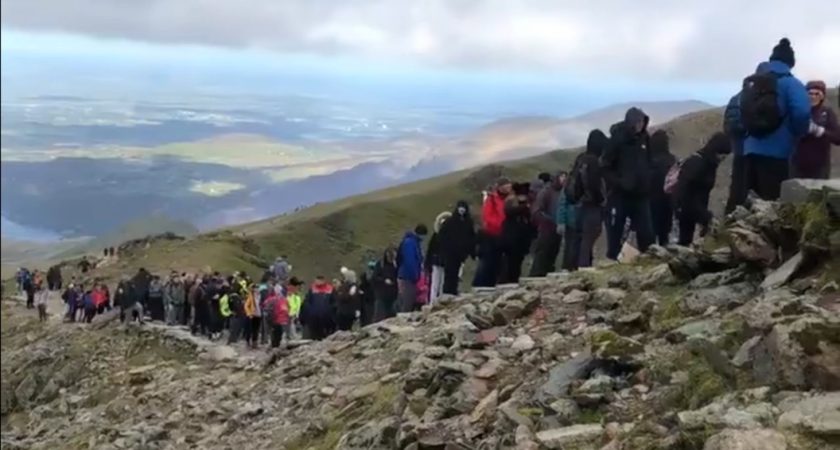 Queuing to take a selfie at the top of Snowdon is “irresponsible” but a Welsh Government minister stopped short of endorsing a “stay local” travel restriction.

Economy Minister Ken Skates MS criticised the “small minority” of visitors to North Wales who ignored social distancing rules to join a 300 metre long queue to take pictures at the summit of Snowdon at the weekend.

Thousands descended on Snowdonia this weekend – with many travelling from cities in the north-west of England – the epicentre of coronavirus transmission across the UK at the moment.

Mr Skates addressed the queues and the large numbers of visitors to North Wales at a Covid-19 briefing in Cardiff but he would not back the reintroduction of a cross-border travel ban.
He said: “People have their own role in judging what they should and should not do, not just what they can and cannot do”.

He praised tourist businesses in the region for putting in measures to protect customers and staff but said it was “a very fine balancing act” maintaining economic activity and ensuring “public health remains a priority”.

But when pushed on his view of the weekend scenes in Snowdonia, he said: “Some people act irresponsibly but the vast majority of people act responsibly, not just towards their own health but the health and safety of others.

“Unfortunately a small minority of people can sometimes be disruptive.
“But we are willing to respond to the call of any public body that wishes to have more powers in order to respond to such behaviour.
“We’ve done that when the police asked for the £10,000 fines to be introduced.
“We’ve done it when local authorities have asked for powers so they can contain the virus by cracking down on illegal gatherings.”

He said it was “vitally important anybody who visits Wales acts in a responsible way to prevent any transmission occurring”.

Mr Skates added: “We will go on responding to public bodies that ask us for powers to be able to respond to irresponsible behaviour.”

He said the Welsh Government was due to have a meeting with North Wales local authorities over a rise in Covid-19 transmission.

In Liverpool cases have soared to more than 250 per 100,000 and officials believe the figure is doubling every eight days.

In North Wales only Anglesey and Gwynedd council areas are below the watch list target of 25 Covid cases per 100,000 people.

There have been 219 new cases of the virus confirmed in North Wales over the same time period.