A former psychiatric nurse from Deeside who developed a neurological condition which affected her ability to walk says joining a National Lottery funded wheelchair rugby team has helped her feel normal again.

Around eighteen months ago, Bex Laing lost mobility in her legs as a result of her illness.  The 32-year-old was forced to make big changes to her lifestyle, including giving up her place on a local roller derby team.

But when Bex discovered the Mold Dragons, a wheelchair rugby club based in Flintshire, she sensed an opportunity to regain the buzz she got from competitive team sport.

The Deeside Leisure Centre based club aims to provide an inclusive game of rugby for all; disabled, able-bodied, male, female, no rugby experience or those thoroughly experienced in the game.

National Lottery funding through a Sport Wales development grant has helped make the club more accessible to new members like Bex.  Whereas equipment was previously borrowed, the money has helped buy their own specially modified wheelchairs which make the contact side of the sport safer.

Having their own equipment means the team is now able to train more regularly.  The club acts as an entry into wheelchair rugby so that members can train and play recreationally, but also have the option to play competitively and potentially trial for the Welsh national team.

In Wrexham and Flintshire alone, the National Lottery has awarded around £101m to over 4,600 good causes since it was launched 25 years ago.  Charities, community groups, grassroots sports projects, arts organisations, athletes, filmmakers, and heritage sites have reaped rewards from the funding. Bex said:

“If you’d asked me five years ago how important exercise and a team sport was to me, it wouldn’t have been up there. But since joining the roller derby team, I love the idea of being in a team, working together and that support. The Mold Dragons gives me everything that I lost once I was no longer able to play roller derby.

“My neurological condition affects my fatigue levels and I lost a lot of muscle mass and put on a lot of weight over the last year because I wasn’t being active, and so the club has given me my activity back. It means that I’m building muscles that I didn’t have before – my previous sport was all about my legs, but now it’s all about building up my arm muscles.”

Initially joining to test the water, Bex now plays competitively for the team, taking on teams across the British Isles.  She said:

“The Mold Dragons is so important because it offers inclusivity within a sport, although the majority of our team do have some level of disability. An able-bodied person can jump into a chair, and it gives us that balance – disabled people being able to play on the same level as their friends or other people in the community.

The Mold Dragons has given me not only a sport, it has given me a group of people that understand my disability.

“Although we all have different disabilities, we’re all so supportive of each other, and it is someone to talk to when things aren’t going well. The club offers people with a disability the opportunity to exercise, to have a team and experience that camaraderie that sometimes isn’t there within the community for the disabled.” 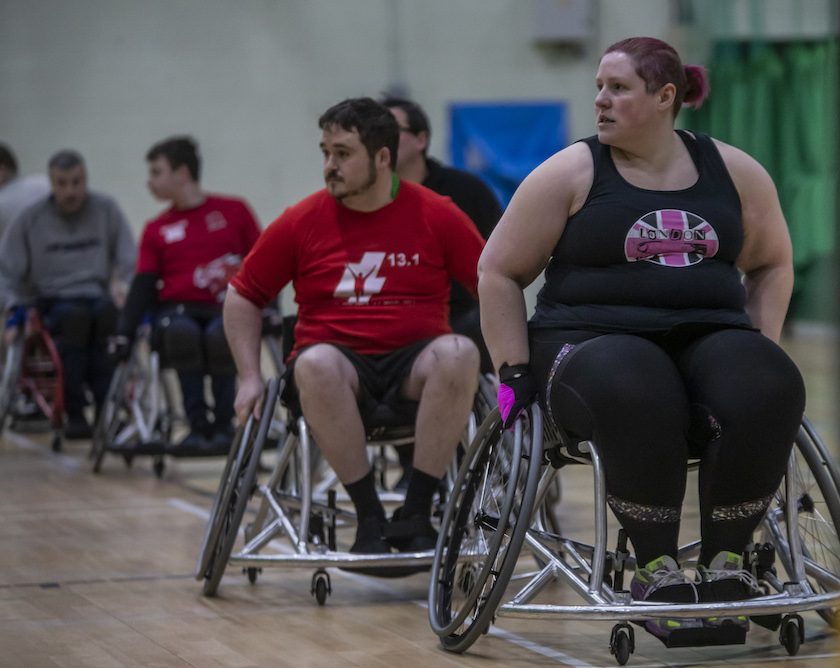 “Bex’s story is a brilliant example of how the National Lottery isn’t just life-changing for the lucky ones who win every week.  It also changes the lives of ordinary people across the country through the millions it raises in good causes.

However, many people in Wrexham and Flintshire who use well-known museums, art galleries, charities, leisure centres and parks will often do so completely unaware of the fact they are benefiting from National Lottery funding.

It is no exaggeration to say that the very fabric of communities throughout Wrexham and Flintshire has been changed for the better by the National Lottery.”

He added: “The National Lottery Lifechangers campaign aims to raise awareness of how that investment has had a positive impact on communities in Wrexham and Flintshire and has provided people with amazing life-changing opportunities.”

Keep an eye in local media and on National Lottery Good Causes on Facebook, Twitter and Instagram and the hashtags #LotteryLovesWrexham #LotteryLovesFlintshire #Chwedlau’rLoteri over the next two months for more inspirational stories like Bex’s and the Mold Dragons which illustrates how National Lottery funding has helped to change the lives of people in Wrexham and Flintshire for the better.