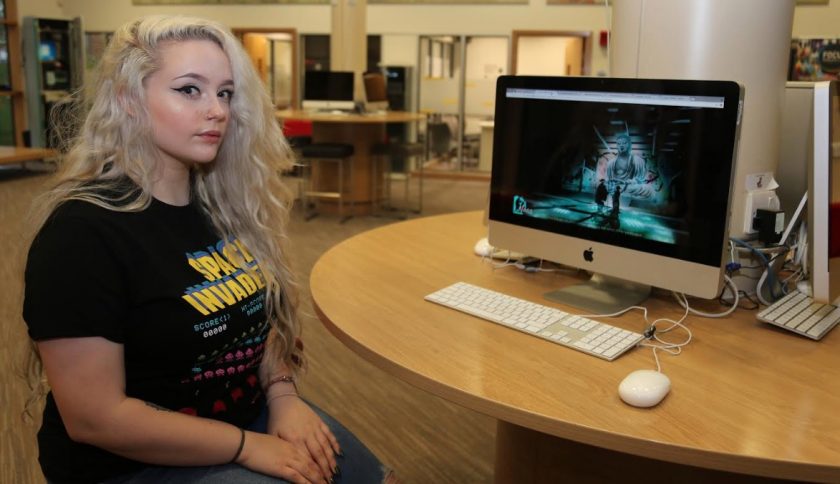 A game art student from Wrexham Glyndwr University is set to exhibit her work at one of Japan’s most prestigious arts festivals.

Sophie-Elisabeth Martinez Nightingale, from Kinmel Bay in Conwy, has had several pieces accepted into the 22nd Japan Media Arts Festival through an open competition.

The festival, which has been held since 1997 by the Japanese Ministry for Cultural Affairs, attracts thousands of competitors from across the world who compete for prize fees of up to one million Yen.

The pieces which Sophie-Elisabeth put forward had been created as part of her work on the university’s BA (Hons) Game Art degree, and were heavily influenced by Japanese culture.

She said: “The pieces I have submitted are concept art around the Heian period in medieval Japan. Concept art is the first hand view of the artist’s vision – when someone is writing a story for a game, we take those ideas and apply them to create the art.

“That includes the Buddha which I submitted to the festival – it was part of a games concept I had been working on. The Heian period has a lot of stories around it – shamans, monks and magicians were important figures at that time.

“There is a female protagonist in the game and as it progresses, she gives up parts of herself, such as her emotions and even her gender.

“The Buddha piece is the prayer room in the game, and is a place she keeps returning to.

Designing it was a very long process – I had to look into the myths and stories of the time, and make a character whose backstory fitted in with them as part of the work on the concept.

“There are lots of Easter Eggs, or hidden features, in the pieces too – they are complex work.

This was my last project at the end of my second year, and Steve Jarvis, our lecturer, just said to keep going with it – so I came back after the summer with this massive world.

“Steve then mentioned that there had been a call for entries into the Japan Media Arts Festival, and encouraged me to apply – when I looked, it was just before the competition closed and I just went ‘oh’ to myself!

“I gathered four pieces together and submitted them – there are thousands of entries from all across the world – and I was delighted when I heard I’d got through.”

Sophie-Elisabeth believes the support and guidance on the Game Art course has proved invaluable – and credits Steve, her lecturer, with helping guide her towards the field of concept art.

She added: “The course has been brilliant and I can’t praise Steve enough. There’s so much you can do in Game Art that I didn’t know where to start or what to do, and Steve suggested I look at concept art – I love it and he has taught me so much.

“Now, I am always pushing myself to be better and better and my work is getting so much stronger as a result as I’m making myself go for the professional standard in the areas I want to work in.

With this course, we are given the freedom to choose the areas we want to develop- and the guidance to succeed.”

Sophie-Elisabeth will hear whether or not she has won the competition in spring next year.

Lecturer in Game Art, Steve Jarvis, said: “I’m delighted that Sophie-Elisabeth’s work has gained international recognition and she’s been accepted into this competition.

“She has really applied herself to her work in concept art, and her level of attention to detail is really paying off.

Our courses are designed to help equip students with the skills they need to succeed in the games art industry – and Sophie-Elisabeth’s work is already garnering international attention.

“She has a great future ahead of her.”

Some of Sophie-Elisabeth’s work – including the Buddha piece – can be seen here: https://nanos.artstation.com