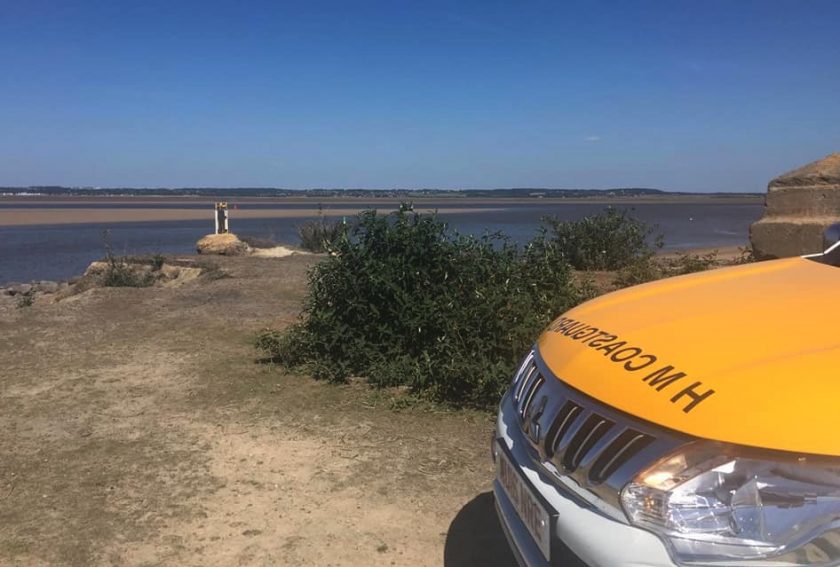 Volunteers from HM Coastguard Flint and Flint Lifeboat were scrambled to reports of up to eight people in danger of being cut off by the tide near Mostyn Docks on Saturday afternoon.

A rescue team from Rhyl Coastguard were also called to assist with the incident,“due to the possibility of a technical rescue.”

Once on scene, the teams witnessed two males walking out into the Mostyn channel section of the Dee Estuary with an inflatable dinghy and reports of ‘marine traffic’ heading into Mostyn Docks.

Other members of the group were closer to the shore on the sand.

Flint lifeboat was requested to launch, however the crew were stood down when the two males returned to shore.

Coastguard officers issued the group with ‘safety advice’ and told them to leave the area.

“Whole team paged along with Rhyl Coastguard Rescue Team to reports of of 7/8 persons in the process off being cut off by the tide close to Mostyn Docks.

On scene Coastguard Rescue Team witnessed 2 males walking out to the Mostyn Channel with inflatable dinghy with marine traffic on it’s way in to the docks and other members close to shore on the sand.

As a result Flint Officer in Charge requested Flint R.N.L.I Lifeboat to launch.

Due to the difficult terrain the 2 males with the boat made their way back in and as a result all members given safety advice and asked to leave the area due to the dangers.”

A spokesperson for RNLI Flint said: “Flint Lifeboat was tasked by UK Coastguard to multiple people in danger of being cut off by the tide at Mostyn Docks. Flint Lifeboat was stood down prior to launching as persons made their way back to shore safe and well.”

The incident was one of three which Flint Coastguard officers dealt with on Saturday.

Yesterday saw the team carry out a coastal safety patrols due to the high number of visitors expected to the coast despite the current COVID-19 ‘stay at home’ guidelines in Wales remaining in place.

Just before 3pm the team were scrambled following a 99 call stating 2 people walking the sand banks between Flint point and the Flint Town Football club.

There were concerns they were about to be cut off by the incoming tide.

“On scene search conducted of the area in question. Not long after members of public approached us to tell us that they had seen and stated the 2 people in question had safely walked ashore. Stood down and returned to patrol.” A Coastguard spokesperson said.

The team were called out again just before 10.50pm to assist colleagues from Llandudno Coastguard to assist with police led incident at Pensarn beach.

Both teams on scene with both RNLI Rhyl boats. After a short time incident came to a safe conclusion and all units stood down.