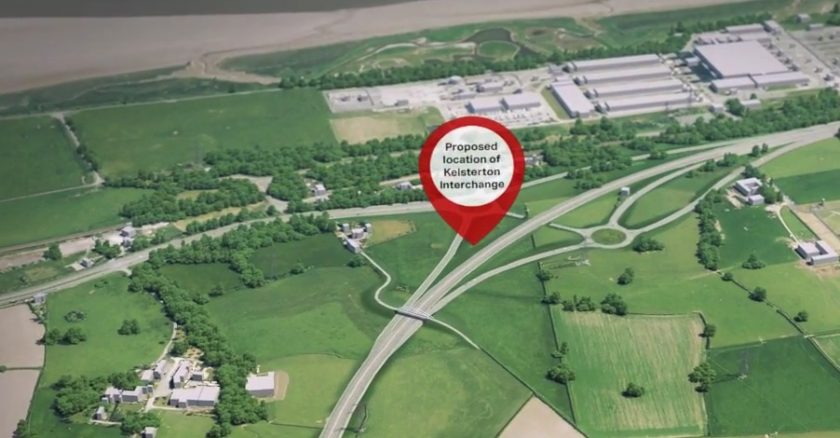 The cost of building the so-called Red Route – a proposed new road aimed at easing congestion along the A494 and A55 through Deeside – has risen by nearly £50m in just two years.

The Welsh Government scheme will see a new 13km two-lane dual carriageway linking the A55 at Northop with the A494 and A550 north of Deeside Parkway Junction via the Flintshire Bridge.

Initial Red Route construction costs were stated at around £250m during the consultation phase, a figure which is still quoted on the Welsh Government project page.

Earlier this month the government published its ‘Wales infrastructure investment plan’ listing a ‘pipeline’ of large capital projects including the Deeside corridor scheme.

The document reveals the cost of delivering the Red Route has now increased by nearly 18 percent to £300m.

The government confirmed to Deeside.com the £45m increase on original costs is due to “VAT and inflation.”

A spokesperson said: “The Flintshire corridor scheme is of critical importance to North Wales.  It will relieve congestion and allow the economy to grow and prosper.

“The scheme cost quoted in the 2017 consultation document was £255.4m. This has been adjusted to £300m in the Wales Infrastructure Investment Plan to take account of inflation and VAT.”

Work on a preliminary design is expected to be completed early next year before the project moves through to a key legal phase, detailed design and construction is expected to begin in 2023 with completion expected by 2026.

Flintshire Council has rowed back on its full support for the Red Route, Cabinet members backed the government’s decision to move forward with the scheme in 2017 but with the addition of some Blue Route elements, known as Red Route Plus.

They include a crawler lane along the westbound section of the A55 towards Halkyn and changes made to the Ewloe interchange.

The council is now demanding the crawler lane is built before work on the Red Route is complete and wants assurances “in writing” from the Welsh Government.

Deputy Leader of Flintshire Council Carolyn Thomas revealed to a Welsh Assembly committee in October that the government hasn’t responded to their ‘Red Route Plus’ request.

Cllr Thomas said: “We have asked for Red Route Plus. We’d like the plus bit—which is the extra crawler lane going up the hill towards Holywell—we’d like that to be done before the red route.

….We have asked Welsh Government if they could do this, and we haven’t had a response yet.”

“I would like to have that in writing that that is done before the red route is completed.” Cllr Thomas added.

A Welsh Government spokesperson told Deeside.com: “The possibility of providing additional lanes on the A55 from Northop towards Holywell will be investigated during the next stage of the development of the Flintshire Corridor scheme.

This will include detailed assessments to confirm if any additional lanes provide value for money and offer demonstrable benefits to health and the environment.

If they are required the timing of construction will be considered as part of the overall programme of construction for the scheme, which could mean constructing the lanes before the Flintshire Corridor if it’s shown this would provide the most benefits.”

Earlier this year the government scrapped plans to build a 23-km dual three-lane motorway to bypass Newport due to rising costs and environmental concerns.

A petition calling for the ‘Red Route’ to be scrapped was submitted to the Welsh Assembly in May.

It states additional costs for a crawler lane between Northop and Holywell are not included by the government and the “underestimate of the costs” means a new road “cannot be considered value for money.”

The petition also states “the construction of the new road through ancient woodland, and across agricultural land, contradicts Planning Policy Wales and the Well-being of Future Generations Act.”

Climate scientist Tom Rippeth, one of those behind the 1300 signature petition, said:

“It is disappointing given the Welsh Government has recognised the Climate emergency that the only two options considered – the red and blue Route – both involve increasing CO2 emissions.

The crawler lane should be a top priority as it is major congestion point on the A55.

I am pleased the council agree [on a crawler lane] but disappointed that this appears to be of lower priority for the Welsh Government than the Red Route.

A full review of future local transport should then take place once the impact of the crawler lane, the improvements to Dee Bridge and the traffic flow are fully monitored and understood.”

The National Assembly’s petitions committee which is currently looking into the scheme says it needs to hear more evidence from businesses and environmental sectors, as well as Transport Minister Ken Skates.