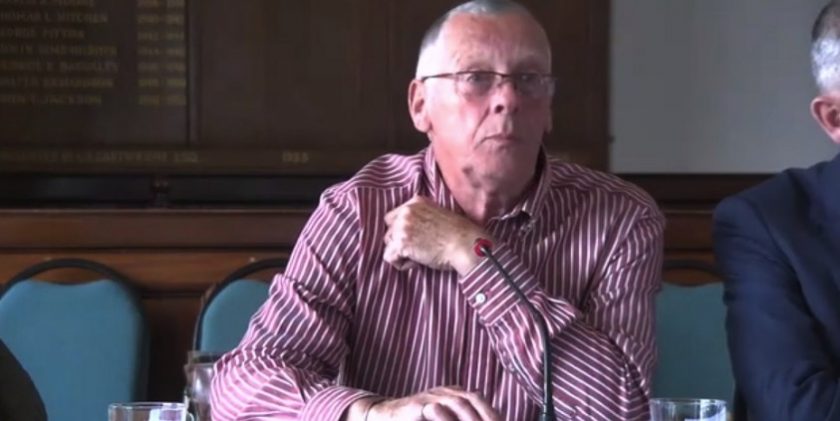 David Keane has published an open letter to Bob Fousert, chairman of the Cheshire police and crime panel, urging him to step down.

It follows last Friday’s panel meeting, where Mr Fousert suggested officers who wore rainbow lanyards which support inclusion and equality for lesbian, gay, bisexual and transgender (LGBT) people were ‘crossing the boundary’ from impartiality into making an ‘overtly political statement’.

In the letter published today, June 17, Mr Keane told Mr Fousert that he does not want any public servant or resident to ‘feel oppressed by these comments’ and that he would continue to encourage the force to ‘openly express their support’ for LGBT people in Cheshire.

He said: “My view, as a representative of the residents of Cheshire, is unequivocally that your views are outdated and inappropriate and should not, and cannot, be seen to be the views of the panel.

“To allow such views to be seen to represent those of the police and crime panel could create a crisis of public confidence.

“The fact that you have made these statements as chairman of the panel has, I believe, brought the panel into disrepute.

“Therefore, I request that you consider resigning from the Cheshire police and crime panel with immediate effect.”

The comments came after Mr Keane confirmed he would hold a special meeting next month to discuss the recent tribunal involving Matthew Furlong – a 25-year-old who was overlooked for a job at Cheshire Police because he was white, heterosexual and male.

Mr Fousert then asked about a rainbow lanyard with the phrase ‘LGBT+ Ally’ which was worn by Deputy Chief Constable Julie Cooke at a recent meeting he attended.

He said: “Do you consider such an overt political statement to be appropriate for a senior officer to wear, given that the police should be seen to be impartial in all it does?

“And what message do you think this sends to officers and staff in terms of integrity, leadership and objectivity as espoused by the constabulary’s code of ethics.”

After Mr Keane suggested the lanyard ‘represents modern and inclusive public service’, Mr Fousert went on to discuss a recent article in Policing Insight which he claimed warned against ‘the erosion of police impartiality’ by officers supporting LGBT rights.

He also quoted Police Regulations 2003 which state an officer ‘shall not take any active part in politics’.

Mr Fousert added: “This is taking part in politics. I feel that she has crossed the boundary with regards to the very overt statement she is making in wearing that lanyard.

“We are here as representatives of the public and I think a lot of members of the public will take exception to that political stance, and it is against police regulations to do so.”

Mr Keane told the panel that he was ‘deeply shocked’ and ‘deeply saddened’ by Mr Fousert’s remarks.

He added: “I really can’t say how strongly I disagree with your question and your drive on this matter.

“I feel that we have been taken back almost some years in public services in Cheshire by your approach. I feel it is really outdated and exclusive. I don’t know what more to say.”

The comments were also criticised by councillors on the panel.

Cllr Lynn Riley, Conservative – Cheshire West, suggested it is important that officers make LGBT people feel supported so they can report any issues to police – highlighting a rise in confidence to report domestic abuse in the LGBT community.

She said: “I think if we are truly going to promote stronger communities I would really celebrate any of the small initiatives that just give people the confidence to take that step that might just change your life.”

Cllr Ant Critchley, Labour – Cheshire East, added: “What you’ve just said, you’ve put your own personal stance on it, and you have made being gay political.”

The Crewe Central councillor later called on Mr Fousert to step down as chairman on Twitter, before signing the joint letter with three of his colleagues on Monday night.

The letter said: “It is widely accepted that LGBT rights and equality is not a political issue.

“Rather, it is a moral duty to promote these rights and equality and in the case of the police service, a legal obligation.

“What is apparent is the lack of understanding in this issue you have shown and maintained.”

Police are required to promote equality for communities which have protected characteristics – such as LGBT people – under the Equality Act 2010.

In a statement posted on Cheshire Police’s website on Monday, Dep Chf Con Cooke – who is also the national LGBT+ lead for the National Police Chiefs Council – explained why she wears the lanyard.

“People don’t choose to be gay or trans, it’s just who they are. And like everyone else, they have the right to feel comfortable and confident in work as well as when they walk down the street.”

The Police Federation declined to comment when approached by the Local Democracy Reporting Service.