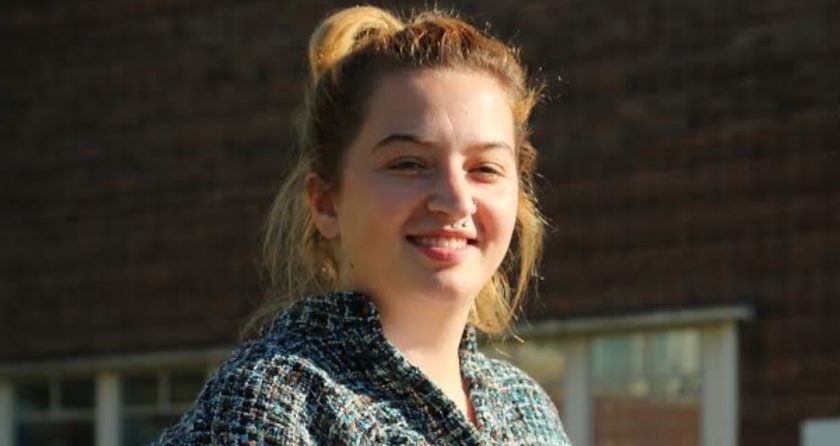 A young woman who turned her life around through youth work after being expelled from college because of her turbulent lifestyle is now looking at a career helping others.

Lois Muir, 22, from Ellesmere Port, is now studying a degree in Youth and Community Work at Wrexham Glyndwr University – and has won two awards from the Princes’ Trust for her own work with young people.

She is urging young people to remember their life ‘is not written off’ and that, with the right support, they can succeed.

When she was nine, Lois was assaulted – with the assault affecting her behaviour for many years.

By the time she reached college, she had problems with alcohol and was self-harming – and ended up being expelled.

She said: “I was in college but, because of the way I was behaving, I kept getting kicked out – I had a lot of mental health issues and problems linked to that.

“I kept on causing trouble, but, when I was at my lowest point, someone referred me to the Prince’s Trust and that helped me so much.”

She spent twelve weeks on Team, a Prince’s Trust scheme which helps unemployed young people gain skills and confidence, and things began to change. As a result of the placement, Lois began to have faith in herself – and when it ended, she became a Youth Ambassador for the Trust, working to help others.

She took up a series of jobs in youth work, and it was at one of these that she spoke with Jess Achilleos, a youth worker who lectures on Glyndwr’s Youth and Community work degree.

The chat was about further study to help her develop as a youth worker – and during it, Jess made an unexpected suggestion which was to change Lois’ life once more.

Lois added: “I was thinking about doing an apprenticeship and I talked it over with her. She told me ‘we can get you on the apprenticeship, but we can go one better that that – do you want to do a degree?’

“I never thought I would do a degree – but here I am at university and it’s really great.

Lois has received two Princes Trust awards as a result of her work – one as a Young Achiever and then, earlier this year, an Ambassador award for the North West.

She has also visited Buckingham Palace as a Trust Ambassador – and is waiting to hear if she is shortlisted for the national awards, set to be held in spring 2019.

She is now employed as a youth worker in Cheshire, alongside her studies at Glyndwr, where she is in her final year.

She added: “One of the great things about doing this course is that building relationships with young people is key to your success – and I draw on my own experiences to do that.

“I often say to young people that they can do anything they want to do. They just need one person to believe in them – and once you’ve got that person believing in you, you can do it.

“Your life isn’t written off –and I’m proof of that.”

Lecturer in Youth and Community Work Jess Achilleos said: “Lois is an inspiration and a testament to the power of youth work – and she’s rightly been recognised for her own contributions too by the Princes’ Trust.

“We’re all very proud of her achievements. She has already made such a difference to the lives of young people –she has a great career ahead of her.”

You can see more about Lois’ story here: https://www.glyndwr.ac.uk/en/Schoolsandcolleges/Educationforall/