Mother and daughter from Wrexham graduate together from Glyndwr University 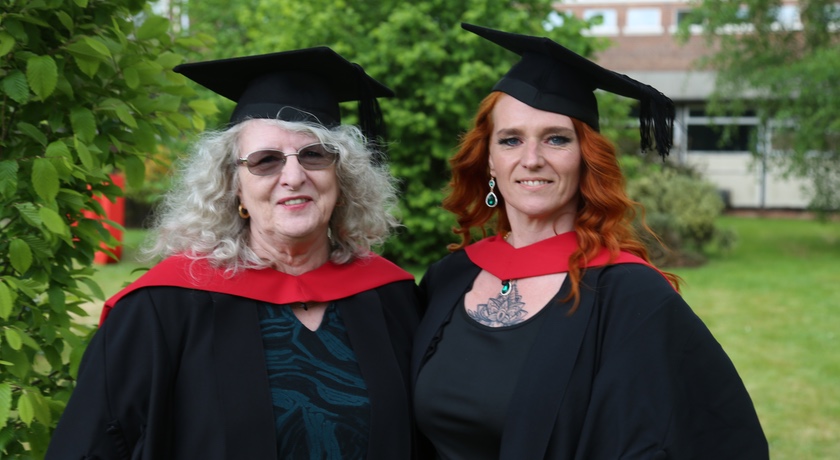 A mother and daughter who graduated on the same day have spoken about how their time at Wrexham Glyndwr helped them through one of the most difficult times in their lives.

Catherine Simon, 45, and her mother, Sue, 71, both from Wrexham, enrolled at the university in the same year and have now graduated together.

While Catherine was studying Criminology, also going on to become a member of the University’s Applicant Support Team and Student Ambassador, her mother Sue was studying History.

They were both due to graduate in 2020 when the pandemic struck, but were finally able to celebrate in style with cap and gown at the university’s huge outdoor Graduation Festival earlier this month.

It capped a remarkable journey they have been on together as they sought to do something positive after a difficult time in both their lives.

Catherine said: “Some life-changing experiences a few years ago made me think about joining university, and using those experiences to have a positive outcome as things were quite negative at the time.

“My father was quite unwell and unfortunately he passed away and myself and my mum were thinking about what we were going to do with ourselves.

“I’d already applied but then mum thought of applying too. When a couple of months had passed and things had settled down more, we both thought – ‘why not?’

Sue said she was initially unsure about joining Catherine on her Glyndwr journey, but decided to enrol just as the academic year was about to start.

“I’d been to an Open Day, and Catherine talked me into it in a way”, she said.

“I’ve always enjoyed learning and wanted to progress in education but had never quite got this far.

“When my husband was alive he was a huge fan of Wrexham in general and kept a huge collection of historical books about Wrexham so that’s why I chose to study History, because I already had a good background in it.

“I wasn’t actually sure at first but I enrolled during Freshers Week and I’ve thoroughly enjoyed it.”

She added: “I’ve made lots of new friends as well.

“We never thought we’d get this moment, it’s been a long time coming but now we’re here!”

Catherine added: “It’s definitely been life-changing and certainly after the difficult time beforehand it’s helped us a lot. It’s fantastic to be able to enjoy it together here at graduation!”