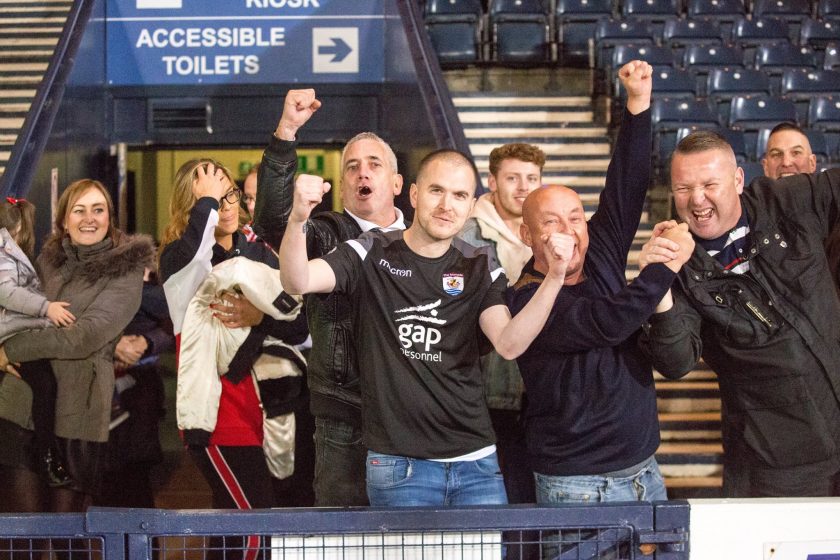 Connah’s Quay Nomads made it through to the semi-finals of the Irn Bru Cup on Friday night with a 2-1 victory over Scottish League Two club Queen’s Park at Hampden Park.

Here’s the pick of the photographs taken by the club photographer on a historic night for the Connah’s Quay club. 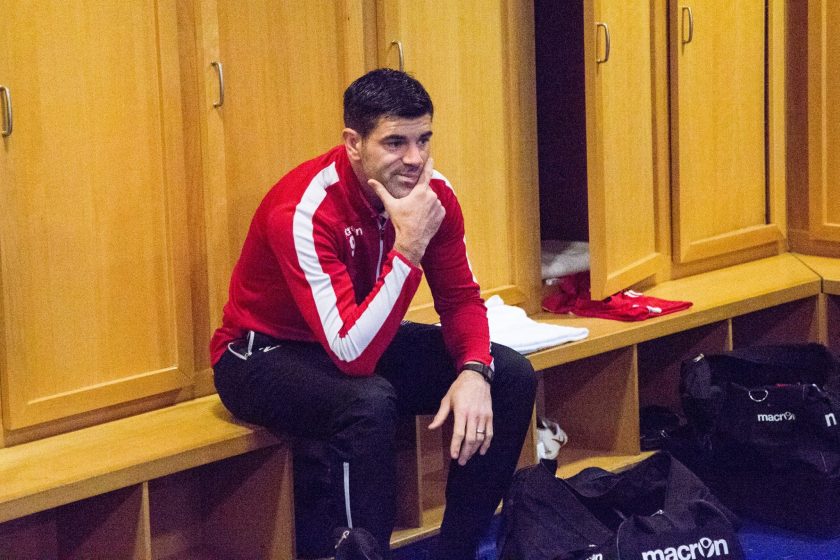 The game was looked upon as of one of The Nomads’ most prestigious away trips, as they travelled to Queen’s Park’s 52,000 seater home. It was their reward for defeating Northern Irish side Coleraine 2-0 in the last 16, a win that followed their 1-0 victory over Falkirk in the second round.

Queen’s Park had already faced Welsh opposition in the competition, having defeated The New Saints on penalties at Park Hall in the second round, and claimed victories over Ayr United and St Mirren Colts on their way to the eight. 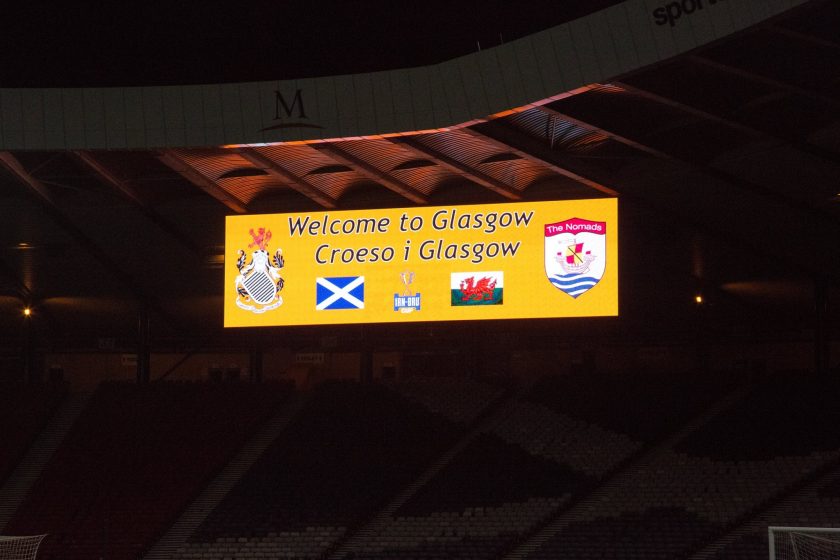 Andy Morrison called captain George Horan back into the starting line up after he returned from injury, with Michael Parker and Michael Bakare also included.

Queen’s Park manager Mark Roberts meanwhile started pacy forward Kieran Moore, with James Grant and Ciaran Summers forming part of a defence that had not conceded at home since September. 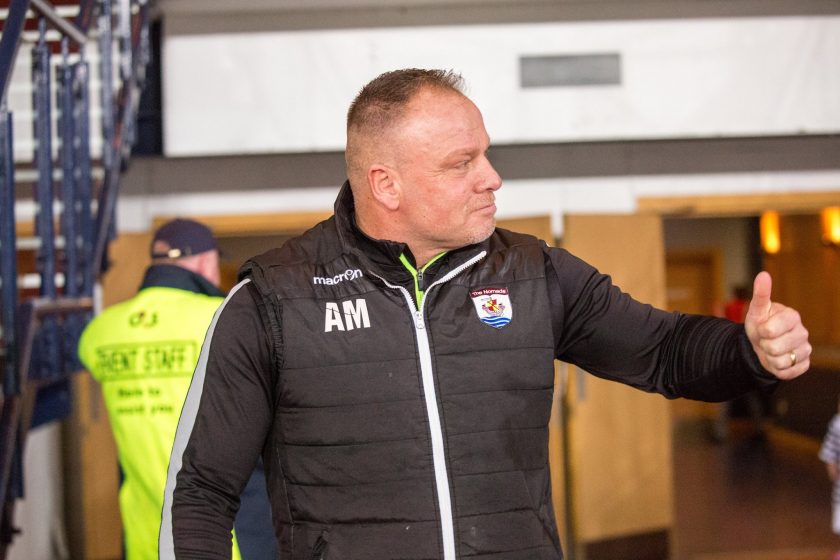 It was The Nomads who claimed the first chance of the game in the seventh minute, when a cross from Ryan Wignall swung close to the Queen’s Park goal into a crowded area before it was cleared away.

A minute later the hosts looked to get at The Nomads’ end, with Moore shooting wide from around 10 yards out. 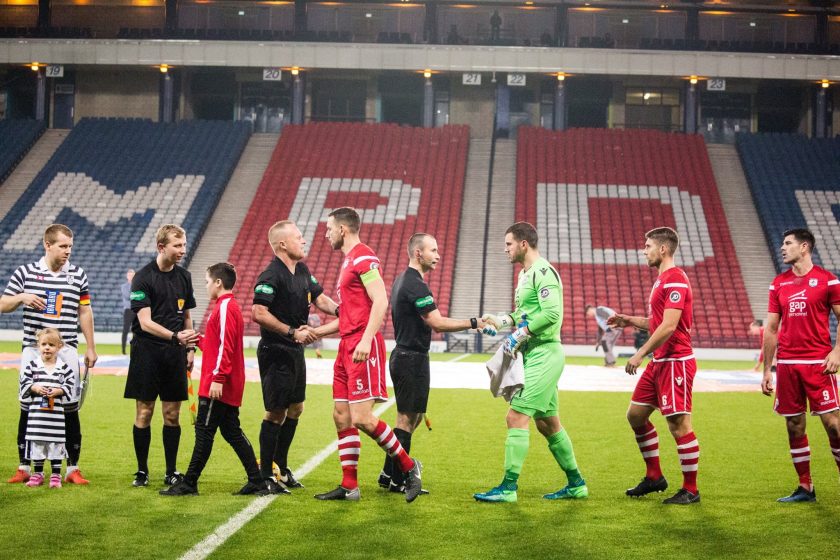 In the tenth minute The Nomads went agonisingly close to taking the lead, when after going clear in front of goal, Bakare sent an effort towards keeper Jordan Hart, whose save saw the ball bound off the right post.

Bakare returned with another strike from around 12 yards out, ensuring the host’s goalkeeper was kept alert in the early stages. 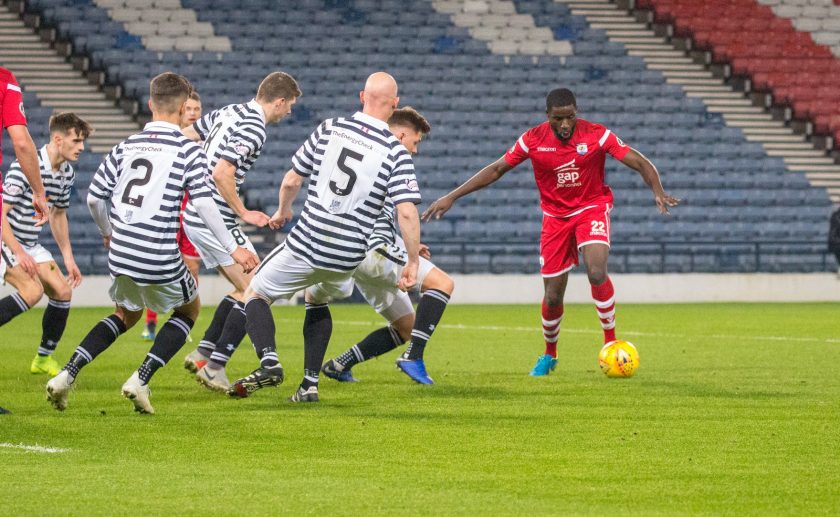 The Nomads were on top and putting pressure on the Queen’s Park end, again hitting the woodwork in the 17th minute, when a Laurence Wilson corner was headed towards goal by Horan, only for Hart to push the effort up and off the crossbar.

As the game went on a battle was developing, as Queen’s Park began to increase their share of possession and won set pieces in the Nomads’ half which were dealt with by the likes of Danny Holmes. 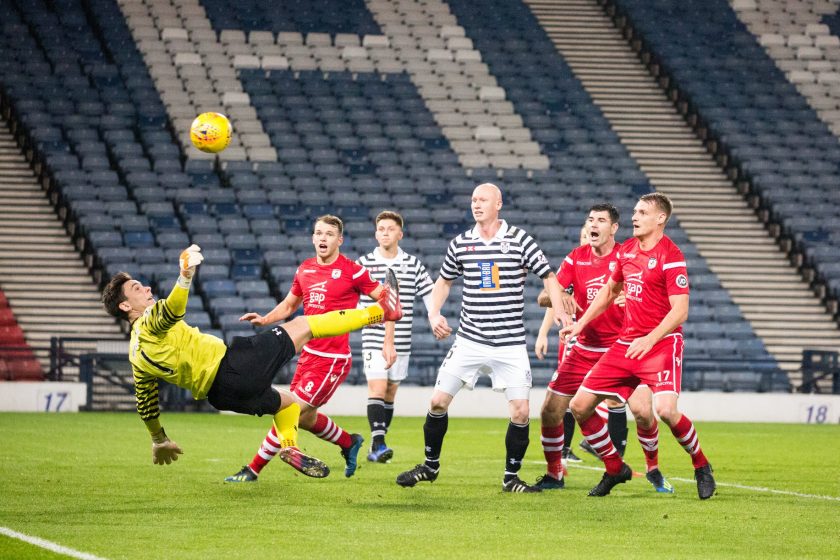 Just before half time The Nomads were still looking to take the lead as they looked to capitalise on a strong first half.  Danny Holmes had a shot blocked from 18 yards, before a run to the edge of the area and powerful shot from Michael Bakare was held by Hart.

After the restart, The Nomads again started brightly, winning a corner which was headed over and onto the roof of the net by Michael Wilde. 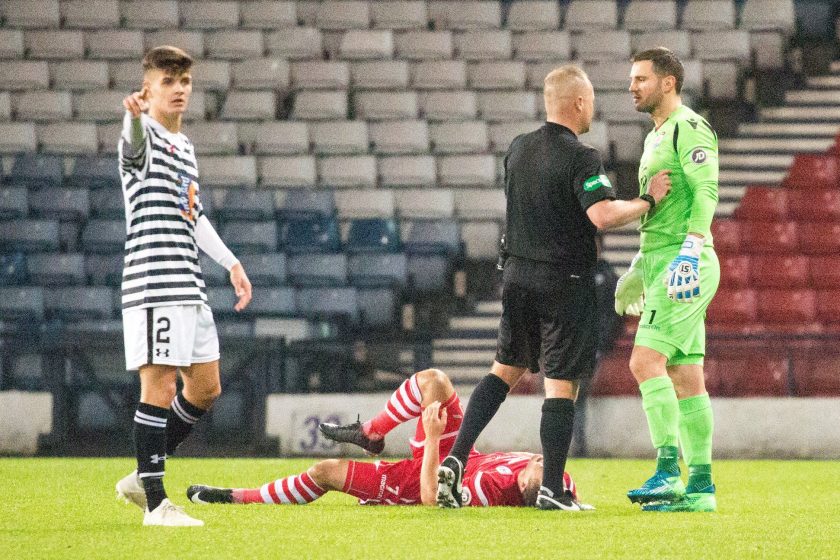 During the next ten minutes, The Nomads won two more corners, but couldn’t break down a stern Spiders’ defence with ‘keeper Hart enjoying a good individual performance.

With 60 minutes played the game remained goalless, and with both sides executing their game plans well, it looked as if a big moment would be needed to break the deadlock. 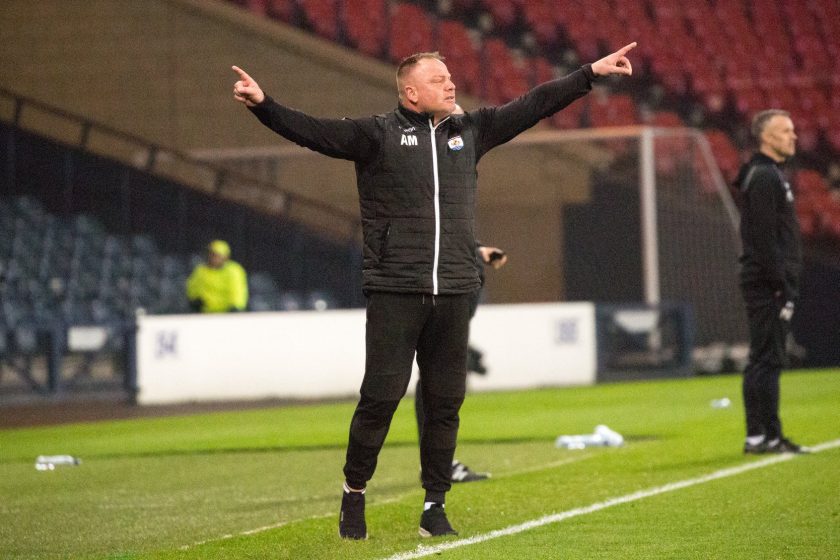 But on 63 minutes, Lewis Hawke replied to The Nomads’ pressure by sending Queen’s Park 1-0 up.  He latched onto a long ball from Summers to send a deft low finish into the left side of John Danby’s goal.

The Nomads made their first change following the opener, replacing Michael Bakare with Rob Hughes, who almost immediately got involved in the 68th minute. 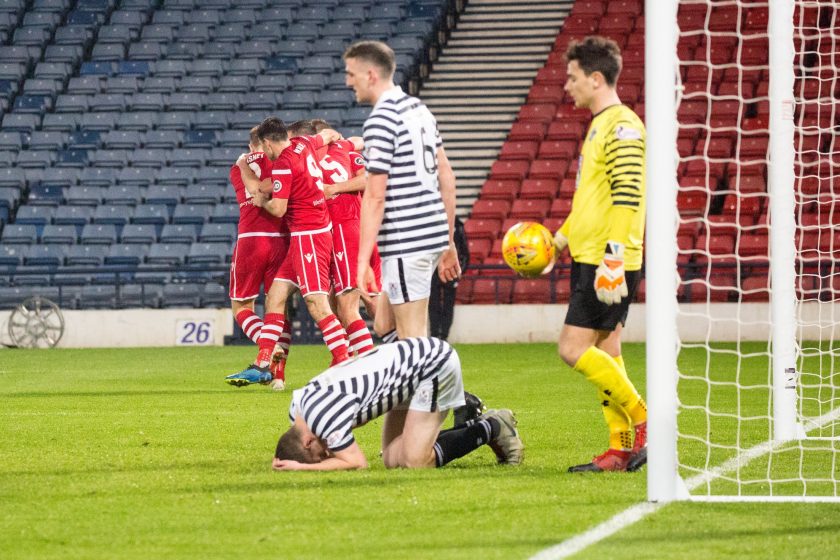 He sent a powerful curling effort towards goal from the edge of the area, with Hart dropping the shot before pushing his mistake away from the goal line to deny The Nomads an equaliser.

In the 73rd minute, The Nomads continued to be frustrated upfront, when Ryan Wignall darted into the Queen’s Park area, dribbling past three defenders only to see his shot hit the side netting from 10 yards out. 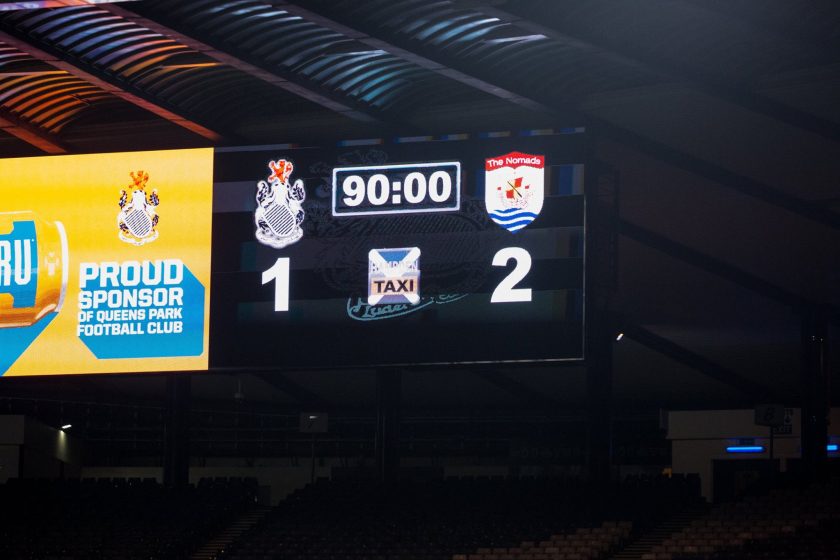 As the game entered its latter stages it looked likely that despite their positive performance and flurry of chances, it might not have been the Nomads’ day.

But George Horan changed all that, when after Wilde headed a Rob Hughes cross near the goal line, he pounced to poke the ball over the line from close range. 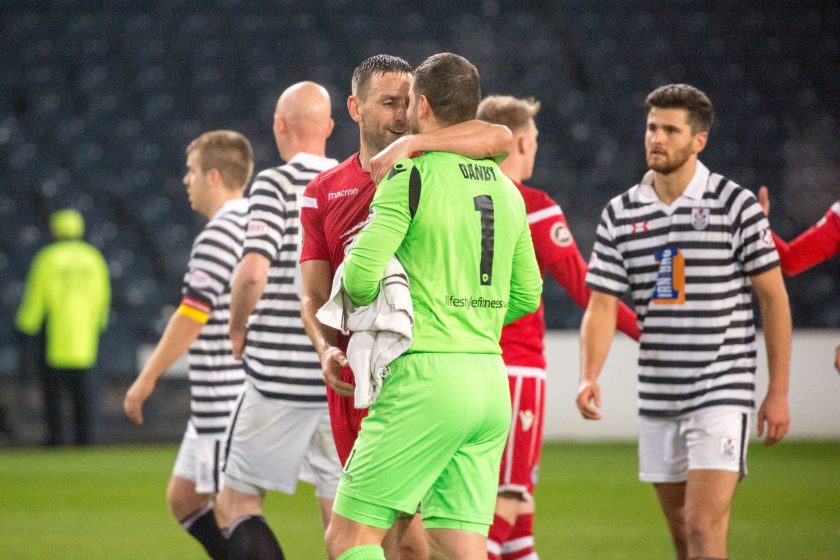 And in the 84th minute, the game was dramatically turned on its head when Michael Wilde took advantage of a good move from Hughes and Parker to drive a powerful shot past Hart from seven yards.

With The Nomads now leading 2-1, they were forced to deal with last minute waves of attack from Queen’s Park, with Declan Poole replacing Ryan Wignall in the 89th. 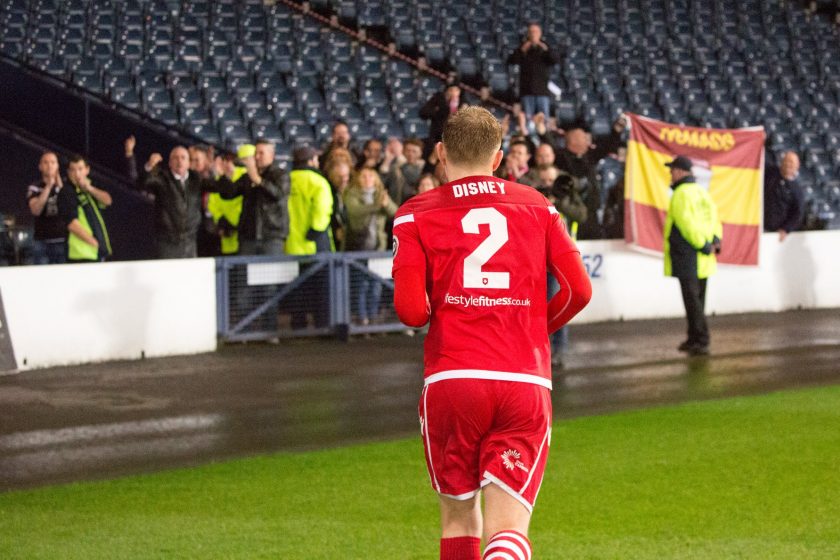 Andy Morrison’s men successfully saw the game out to make history as the first Welsh club to both play and win at Hampden Park.

The result sends them into the semi finals, which will be drawn on Wednesday 21st September at 1pm. 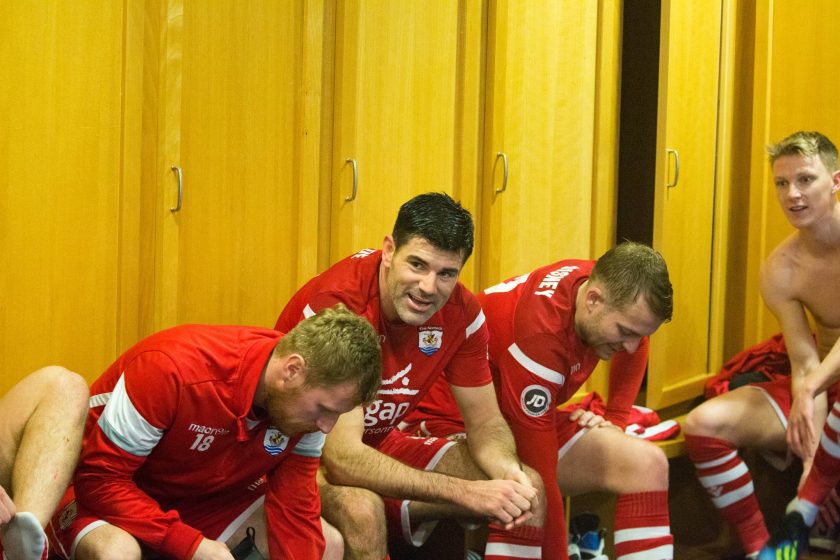 Get notified about breaking
news from across North Wales