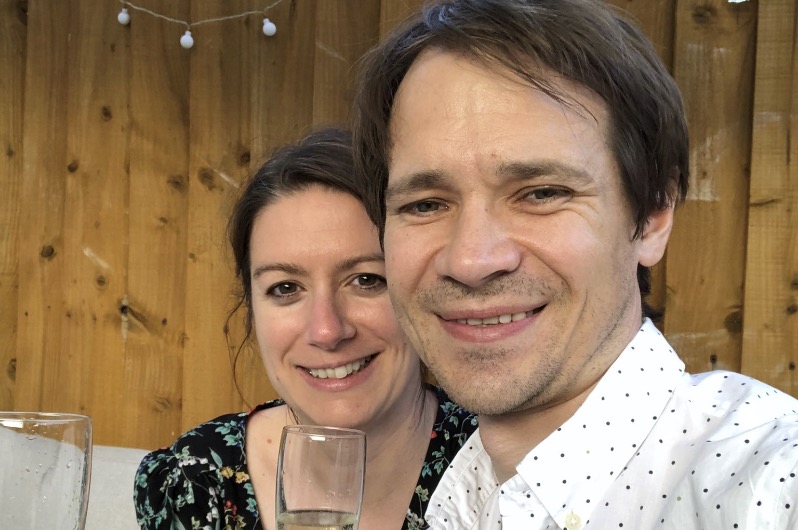 A super-fit cycling enthusiast who had a sudden cardiac arrest in his sleep survived thanks to the actions of his quick-thinking wife.

Jennifer Dunne was woken in the early hours of the morning by husband Geraint’s ‘snoring’ – but amusement turned to panic when she could not rouse him.

In and extraordinary 999 call, Jennifer told the Welsh Ambulance Service she thought her 39-year-old husband had died.

The call handler told Jennifer how to perform CPR, which she did single-handedly for eight minutes until the ambulance arrived – all while the couple’s two-year-old daughter Gwen slept in the next room.

Ambulance crews shocked Geraint with a defibrillator 15 times to restart his heart.

After a month-long stay in hospital, he has lived to tell the tale.

Geraint said: “There are no words to say how grateful I am – not just to Jen for the CPR, but to the call handler, the ambulance crew, everyone.

“Thanks to them, I have a second chance at life.”

The Cardiff couple had been watching Love Island on television before retiring to bed, but in the early hours of the morning, Jennifer had a surprise awakening.

She said: “I woke up to the sound of Geraint snoring, which he does now and again, so I didn’t think much of it.

“I tried to rouse him but couldn’t so just assumed he was in a deep sleep.

“It was only when I nipped to the loo and came back into the room did I realise that something was seriously wrong.

It was Welsh Ambulance Service call handler Stephen Meaker who picked up Jennifer’s call from the Trust’s Clinical Contact Centre in Cwmbran.

Stephen said: “As soon as Jennifer said she thought her husband had died, I knew instantly that I’d be talking her through CPR.

“She was absolutely brilliant and so calm.

“Often in a cardiac arrest scenario, people are in denial and they don’t want to do the chest compressions, but Jennifer understood the seriousness of the situation and just did it.”

Jennifer, 40, added: “I just remember the call handler telling me to get Geraint off the bed and onto the floor.

“I don’t know how I did it, but I found the strength from somewhere.

“The next thing I know he was talking me through chest compressions.

“I never thought I’d have to perform CPR on anyone, let alone on my husband.

“I think I was in a state of complete shock, but the call handler was brilliant at keeping me calm.”

Paramedic Corey Mead and Emergency Medical Technician Jo Sherrin, based in Blackweir, were first to arrive at the property.

Corey said: “It’s very rare that a 39-year-old has a cardiac arrest, so when we got allocated the call, we knew it was serious.

“I walked into the room and found Jennifer doing very effective CPR, which was probably what improved Geraint’s chance of survival the most to be honest.

“We shocked him with a defibrillator 15 times in total – we’d get him back briefly but then he’d go back into cardiac arrest.”

Jo added: “We worked on him for about an hour and 40 minutes all told.

“I think lady luck played a huge part – if Geraint’s wife had not woken up in the first place, it’d be a completely different story.”

Supporting Corey and Jo were Emergency Medical Technicians Chris Bayliss-Smith and Matt Collins, from nearby Roath.

Matt said: “I’ve dealt with hundreds of cardiac arrests over the years, and this is the first time I’ve helped to get someone back.

“Geraint had everything in his favour so we knew there was a fighting chance.

“I just remember thinking how calm his wife was, even assisting us by holding fluids and passing bits of kit.”

Chris added: “Considering her husband was being resuscitated, Jennifer stayed so calm and collected.

“The most poignant moment for me amid the chaos was seeing Geraint’s daughter on the baby monitor next to the bed.”

Colleagues from Emergency Medical Retrieval and Transfer Service (EMRTS) Cymru helped to stabilise and sedate Geraint before he was taken to the University Hospital of Wales.

Doctors suspect it was myocarditis which led to Geraint’s cardiac arrest in mid-August, which is an inflammation of the heart muscle caused by a virus.

He has since been fitted with an implantable cardioverter defibrillator (ICD), which sends electrical pulses to regulate abnormal heart rhythms.

Geraint, who works at the Equality and Human Rights Commission as Principal, Policy and External Affairs, said: “This came completely out of the blue to us all.

“The only illness I have to speak of is a kidney disease which I’ve managed since childhood, but there’s no family history of heart disease at all.

“I know better than anyone that CPR is such an important skill, and I’d urge everyone to learn it and have a go.”

Today at Blackweir Ambulance Station, Geraint was reunited with the call handler and crew who helped to save his life.

He said: “We’ve got a young family, which we’ve waited such a long time for, and the thought of Gwen growing up without a dad pains me.

“I’ve been given the most amazing gift, which is a second chance at life.”

Jennifer, who works with her husband as a Senior Associate, added: “We know how incredibly lucky we are, especially given the statistics about out-of-hospital cardiac arrests.

“Our daughter would not have a dad if it wasn’t for the Welsh Ambulance Service.

Today marks the start of the Trust’s annual Shoctober campaign, which is designed to educate the public about the importance of early CPR and defibrillation.

When someone has a cardiac arrest, they collapse and become unresponsive.

They either stop breathing entirely, or they may take gasping or infrequent breaths for a few minutes, which can be misinterpreted as snoring.

If you see someone having a cardiac arrest, phone 999 immediately and start CPR.

Watch this video from the Resuscitation Council UK about how to perform CPR.

The Trust has also produced this animation for children which is available in Welsh and British Sign Language too.

In addition, a defibrillator will deliver a controlled electric shock to try and get the heart beating normally again.

Ambulance call handlers will tell you where your nearest defibrillator is.

It is important that new and existing defibrillators are registered on The Circuit in order that 999 operators can quickly and easily alert callers to their location if needed.

Jason Killens, Chief Executive of the Welsh Ambulance Service, said: “Geraint’s story is such a powerful reminder about the importance of the ‘chain of survival.’

“Without Jennifer’s quick-thinking actions, it could have been a very different outcome.

“These life or death situations are what our staff train for, and I’m so thrilled we’ve been able to make a difference to this family.

“We wish Geraint all the best on his continued recovery.”