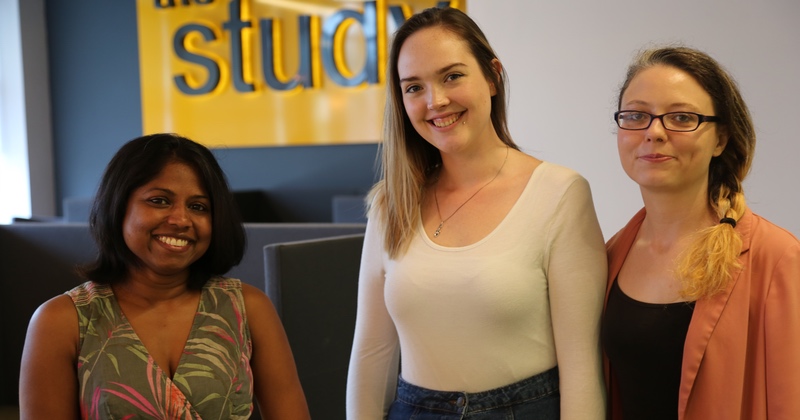 A pioneering company which helps people with rare conditions has partnered with students as part of a study into a condition affecting young people.

The partnership was one of several which Wrexham Glyndwr University has developed with Aparito, a wearable technology company whose work helps people across the globe improve the quality of their lives while living with rare diseases.

The company, whose head office is in Wrexham, worked alongside psychology students Kate McDonald, from Ellesmere Port, and Ariana Bradshaw – originally from Minnesota in America.

The students – guided by lecturer Dr Shubha Sreenivas – were tasked with analysing data from interviews carried out for Aparito with patients, carers and families affected by a rare metabolic disease. The disorder, which to protect study participants cannot be disclosed, is caused by a genetic mutation which affects young people and adults.

“The CEO of Aparito, Elin Haf Davies, registered as a children’s nurse initially – and now wants to use technology to help more people and to provide assistance where it is needed,” explained Shubha.

“Rich Picking, our Professor of Human-Computer Interaction, advised me of a meeting with Aparito arranged by a team from WGU. I joined the meeting on the basis of overlapping research interests, and we soon realised the potential to collaborate on an ongoing research. A few weeks later, Elin contacted me with the details of the research for our input.

“I then selected students on their skills to match our research involvement needs, and offered the opportunity to Ariana and Kate. They were very keen to be involved with this research. For the project, Aparito were looking into what the patients were saying about living with this condition – this involved both an interview and then a subsequent data analysis, which is where we provided assistance.”

The students’ work was part of a wider project for Aparito, building an app for an international alliance which works with patients with the condition, which will help patients to manage their care.

Kate said: “The project was a multi-agency approach – it was about working with pharmaceutical companies, healthcare companies , and more – getting a full picture of the needs of the individual and improving the care they get. The condition we were helping with the research is quite an unpredictable disease, and that means it can make for some quite stressful times for families.

“The disease is so different for different people – so one idea behind the app is that it helps people to build up a record of what they are experiencing – which in turn can help other people with dealing with similar symptoms.”

As part of their work, the students analysed a series of global interviews carried out by Aparito, looking for key themes and building a report identifying them.

Ariana added: “We were given long transcripts of interviews that had been carried out with participants around the world – from people in Japan, Sweden, the United States, the UK and elsewhere.

“From the transcripts, what we had to do was a qualitative data analysis, working through and pulling together themes, word clouds and keywords to represent what people with this condition experienced and to showcase their views.

“As we carried out that research, it became very clear that the work we were doing was a real-world experience, which would have actual effects on people’s lives. That can be a daunting thought, but our workshops with Shubha and what we’d learnt in our lectures came in really helpful.”

Dr Elin Haf Davies, CEO of Aparito, will now be working alongside Dr Sreenivas at Glyndwr after having been appointed an Honorary Research Fellow.

She said: “It was great to collaborate with the University on this project, and I hope that many more opportunities will emerge.”