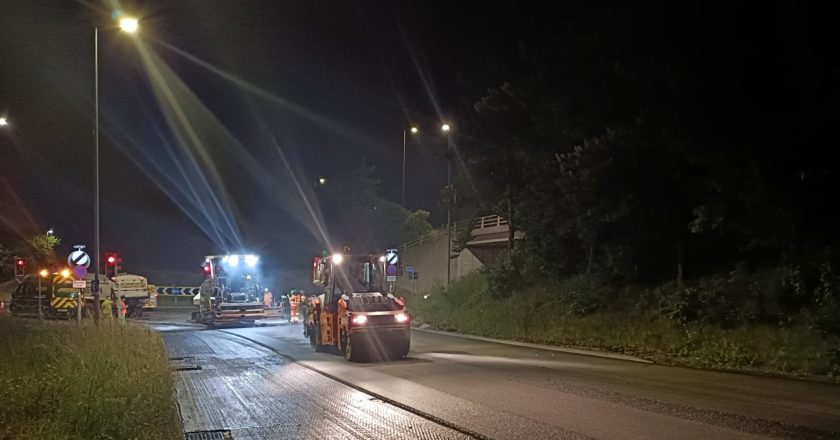 Issues were found with both north and south carriageways on the A483, prompting the ‘remedial’ works that has been taking place.

The Welsh Government’s Traffic Wales information stated the works affecting both the north and south carriageways was being done, and needed, because “The works involve replacing the defective surfacing. It was not possible to complete the remedial works as part of the original programme due to colder winter temperatures.”

Details on the costing was published as, “The contractor is bound to correct the defects identified and is liable for this cost.”

Full resurfacing works to Northbound and Southbound carriageway of the A483 between Junctions 6 and 7 took place from October – November 2021. However concerns were soon raised over the quality of the roadworks, with many drivers complaining of a “bumpy surface.”

Due to the suspected problems being flagged up the road was closed overnight for an inspection that “identified defects within some sections of the northbound surfacing”, at that time the southbound surface was still being worked on.

In November 2021 our sister site Wrexham.com reported that defects on the road had been identified by the Welsh Government, with “corrective resurfacing” being the only solution.

In December we asked Welsh Government if the southbound carriageway had been signed off formally as at the time of the question it had been open fully for a week with no speed reductions.

Wrexham.com was told no undulations were reported for the southbound section – and the road remained open with no restrictions until the recent work.

Due to the works in recent days on the apparently fine southbound section of the A483 we asked about the information published by Traffic Wales, and Welsh Government.

Wrexham.com has been told, “During the resurfacing works last Autumn, the issues on the northbound carriageway were identified before the southbound was resurfaced.”

“However, core testing undertaken at the time of the work identified another separate issue on the southbound carriageway.

“These results were not available until after the works were completed. These issues were rectified this week in conjunction with repairing some CAT 1 defects.”

Wrexham.com asked for details on who would be footing the bill for the southbound works and were told, “The southbound defects were due to voids and were rectified at the contractors cost.

“The CAT 1 defect that was repaired at the same time was due to fire damage and will be covered by the third parties insurer.”

It appears the second go at sorting the road has been successful, with Welsh Government telling Wrexham.com, “We have received the core test results today for the Northbound and Southbound remedial works, both carriageways met the required specification.”