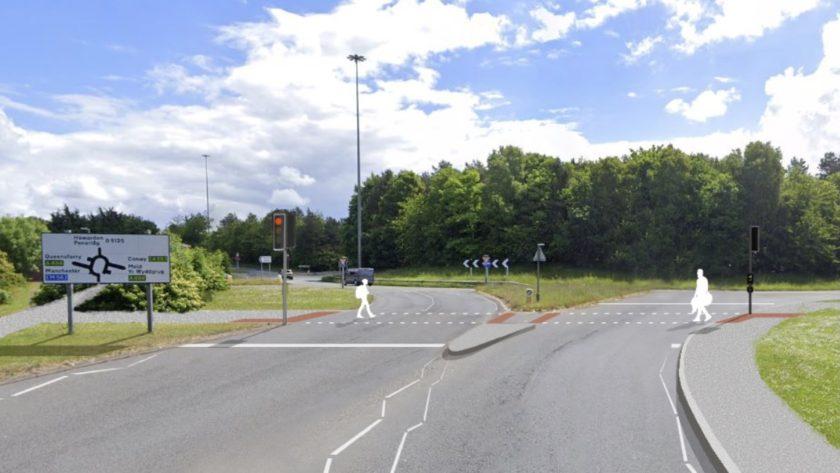 A consultation has been launched on proposals to improve pedestrian and cycling routes around two busy roundabouts in Flintshire.

Engineering consultants Mott MacDonald are working on behalf of North and Mid Wales Trunk Road Agent to identify ‘potential improvements’ to active travel facilities at Ewloe and the A494 Wylfa roundabouts.

Parents have been calling for safety changes to junctions around Ewloe roundabout which are used by children on school runs.

The pedestrian footway along the eastbound A494 to the Ewloe interchange now also forms part of the recommended walking route for school children living in Aston and Higher Shotton. 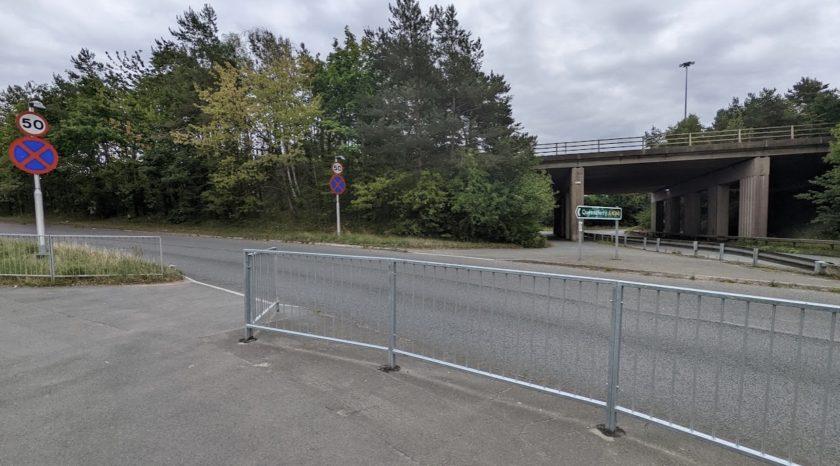 Pedestrians and cyclists wanting to cross the road to continue to Ewloe and Hawarden have to contend with vehicles speeding up as the enter the eastbound A494 on slip road.

As highlighted in a BBC report, drivers are confusing speed limit signs causing them to drive too fast along the slip road joining the A494 eastbound at Ewloe.

The A494 passes over the top of the roundabout on a structure but crossing facilities across the arms of the busy roundabout “are lacking with dropped kerbs on most but no tactile paving and any form of control.” Mott MacDonald has said.

Plans have also been unveiled that could see Wales’ first “Dutch-style” roundabout constructed off the main Ewloe interchange roundabout.

Engineering consultants said that an “optioneering study has been undertaken where options have been scored against Welsh Government policy and operational criteria to determine the preferred scheme.”

The highest scoring option includes Toucan crossings on all slip roads to and from the A494 including “full signalisation of the off-slip arms.”

All footways on the pedestrian cycle paths will be widened to a minimum 3 metres “where constraints allow”, these include the section under the bridges on the main roundabout. 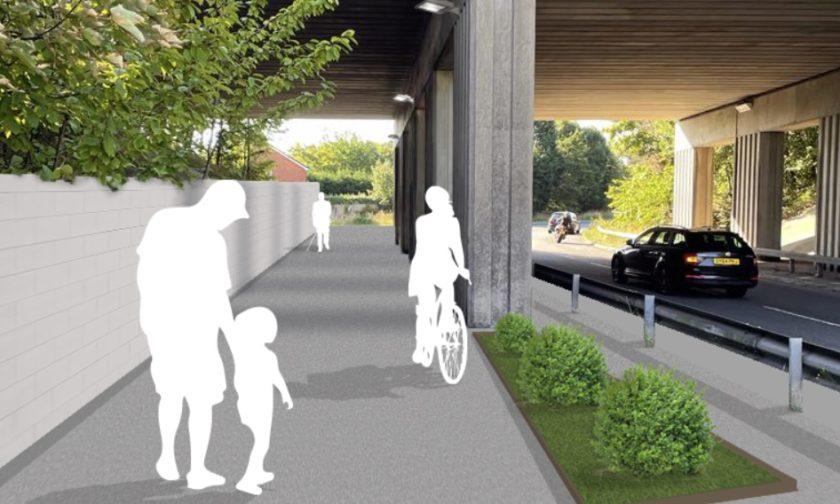 Toucan crossings are proposed on all of the remaining arms of the junction including all A494 slip roads providing safe places for pedestrians and cyclists to cross.

A new raised crossing is also proposed at the entrance to Holywell Road, located to the north-east of the main roundabout.

This crossing is uncontrolled, however “the speed of vehicles entering and exiting Holywell Road would be reduced as they would be required to ramp up to the footway level.” The proposals state.

A Dutch Style roundabout, as the name suggests are roundabouts found in the Netherlands.

They prioritise pedestrians and cyclists in usually urban areas.

The first Dutch style roundabout opened in Cambridge on 2020 but these plans for Ewloe appear to be a first for Wales.

The proposed Dutch style roundabout St David’s Park, will consist of parallel crossings on all arms of the roundabout, with vehicles required to give way to pedestrians and cyclists when crossing.

The footways in this area will be widened to a minimum 3 metre wide shared space. 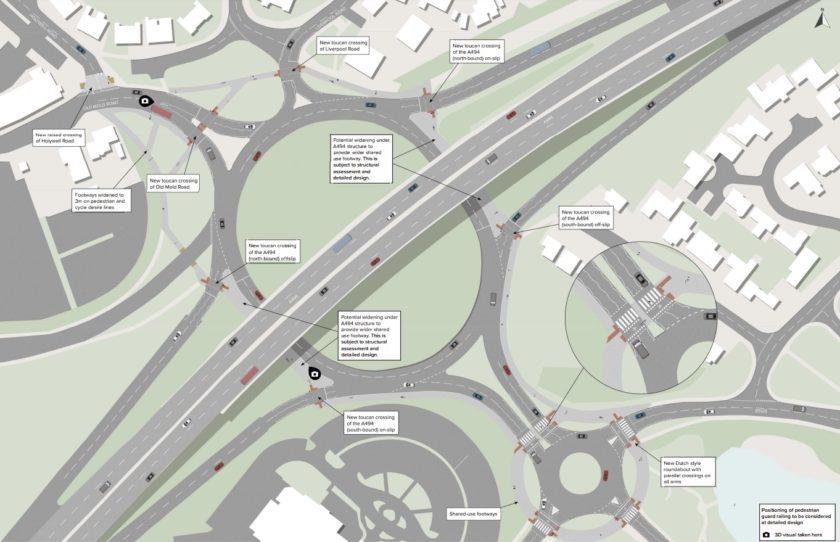 Mott MacDonald has said: “The scheme also assumes the footways beneath the A494 can be widened to provide a minimum 3m wide shared use facility.”

“As noted on the plan, this is subject to structural assessment and detailed design to confirm a workable solution exists.”

Situated on the A494 to the east of Mold, Wylfa is a large 6-arm roundabout connecting Mold with Mynydd Isa.

Similar to Ewloe, facilities for pedestrians and cyclists “are lacking and limited to dropped uncontrolled crossings.” Mott MacDonald has said.

“The high approach speeds make for an unsafe and unattractive place for cyclists and pedestrians.” Engineering consultants have said.

At the access to the filling station, a new raised crossing is proposed, providing a safer crossing for pedestrians and cyclists.

The speed of vehicles entering and exiting the filling station would be reduced as they would be required to ramp up to the footway level.

A new 3-metre-wide shared path then links the filling station access to a new toucan crossing of the A494 Mold Bypass to the north of the roundabout.

“This provides a safe crossing point for pedestrians and cyclists with traffic lights proposed to stop traffic on demand.” Mott MacDonald has said.

“A new shared path then links the toucan crossing of the A494 with the lower trafficked access road located to the north of Chester Road providing a quieter route for pedestrians and cyclists.”

“Cyclists would run within the carriageway which would be resurfaced to provide a smooth and attractive route.” . 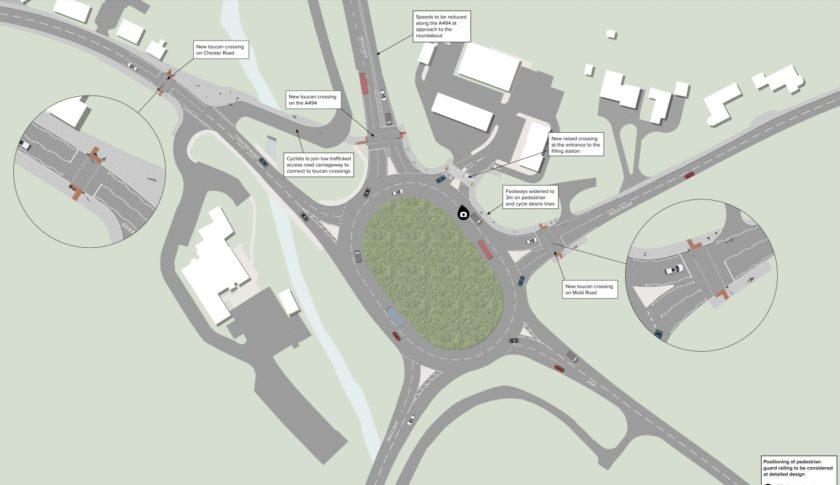 “This offers a safe place for pedestrians and cyclists to cross to access both sides of Chester Road.”

Mott MacDonald said: “We’d love to hear your feedback on the scheme proposals and this offers the opportunity for you to have your say ahead of further design work. Please send through any comments or queries to flintshireactivetravel@mottmac.com”