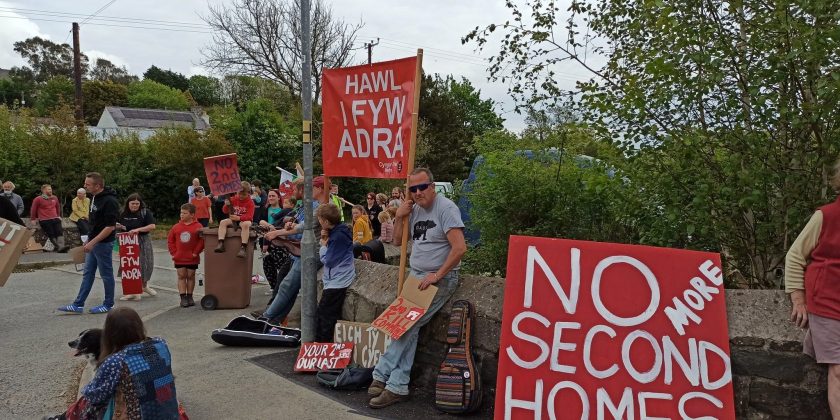 Climate Change Minister Julie James has just revealed details of a pilot scheme to tackle the impact second home ownership is having on some Welsh communities.

Speaking in the Senedd, the Minister confirmed the pilot will bring together a range of actions to address the impacts large numbers of second homes and short-term holiday lets can have.

The Minister told MSs that Dwyfor had been chosen for a pilot which will launch in January with support from Gwynedd Council.

The first phase of the pilot will build on the practical support Welsh Government is already providing to address affordability and availability of housing and will be tailored to suit the needs of people in the area. More details will be confirmed following the Budget, with the Minister keen to look at shared equity schemes, rental solutions and what we do with empty homes.

Two dedicated posts will support delivery of the pilot in the areas to link the interventions, engage with communities and maximise the impact.

The Minister also launched a consultation on proposed planning changes.

This will seek views on the use of ‘class order’ in planning which would allow local planning authorities to require planning applications for additional second homes and short-term holiday lets in areas where they are causing significant difficulties for communities.

The consultation will shape the second phase of the pilot which could involve making changes to planning, taxation and tourism systems.

“We want young people to have a realistic prospect of buying or renting affordable homes in the places they have grown up so they can live and work in their local communities.

“High numbers of second and holiday homes in one area can threaten the Welsh language in its heartlands and affect the sustainability of some rural areas.

“We are a welcoming nation and tourism is a major part in our economy bringing jobs and income to many parts of Wales. But we don’t want ghost villages in seasonal holiday spots – places where no one’s at home in the winter months.

“These are complex issues and there are no quick fixes. What may be right for one community may not work for another. We will need to bring forward a range of actions, there is no one silver bullet here!”

In addition, the Minister for Education and Welsh Language, Jeremy Miles announced the launch of a consultation on additional measures tailored specifically for those communities in which the Welsh language is widely spoken.

This will form the basis of the Welsh Government’s Welsh Language Communities Housing Plan, and will play an important part in maintaining Welsh-speaking communities as places that facilitate the use of the language.

“We want our Welsh-language communities to continue to be economically viable places for local people, especially young people, to live and work and where the Welsh language and culture can thrive.

“While there are no easy answers, I am confident the interventions proposed today will go a long way to addressing our objective of ensuring that people in Welsh-speaking communities can afford to live in the communities in which they grew up.”