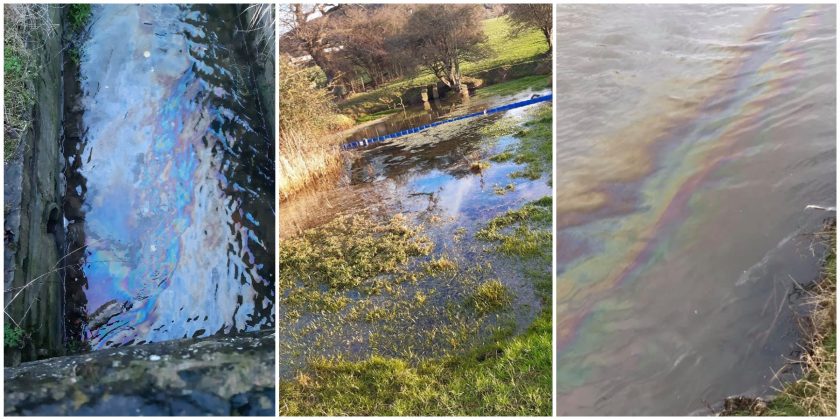 Natural Resources Wales have been blasted over a “lacklustre” response to a fuel spill which campaigners fear could threaten local wildlife.

Oil was spotted flowing along “Prestatyn Gutter” a watercourse running from Meliden down to Barkby Beach in the town.

The leak was reported to the Welsh Government sponsored Natural Resources Wales (NRW) early last week and they say they have taken action to mitigate the impact of the spill.

The Prestatyn North member said: “I am hugely shocked by the lacklustre response from Natural Resources Wales to this potential environmental disaster. I raised this with them several days ago and have spoken to them a number of times since.

“For four days, (that) I know of, fuel has flowed the length of Prestatyn’s Gutter from Meliden into the sea and very little is being done to address this.

“They are a government sponsored body with ultimate responsibility for ensuring waterways, and the wildlife in them, are protected. It appears they are seriously failing in their duty right now.”

The waterway flows through Morfa community woodland where protected water voles are found.

It also runs out close to the sand dunes between Barkby Beach and Talacre, which is a site of special scientific interest (SSSI) with protected sand lizards and Natterjack toads.

The beach also has the only little terns breeding colony in Wales.

Cllr Penlington said he witnessed a “fuel slick flowing freely” on Friday and followed it as far as the Morfa, where it was still present so he called NRW.

He went back to the area on Saturday and traced the spillage back as far as Meliden.

Tracy Pierce, a local environmental campaigner who runs Hedgehog Help Prestatyn, said: “This pollution must be tackled urgently and the source identified. Our wildlife is at risk of contamination – and ultimately death of animals in the food chain.”

Steve Fenner from the Morfa Gateway environmental group said: “I was one of the people who spotted the oil in the water on Thursday and was shocked.

“I have serious concerns about the wildlife being affected, like the water voles that it has been good seeing on the banks of Prestatyn Gutter alongside Coed Y Morfa last year. Many people have volunteered for years to improve and protect our local natural areas.”

Environment team leader at NRW, Rhys Ellis said: “NRW was made aware of the oil pollution incident at Prestatyn Gutter on Tuesday 19 January during Storm Christoph.

“Officers responded to the incident immediately and liaised with local businesses and farmers regarding the incident.

“Due to a number of issues associated with the severe weather in North East Wales, oil absorbents were not able to be placed until Thursday.

“Additional booms were deployed on Saturday in order to contain the flow of the pollutant.

“Officers are attending the area on a regular basis and are continuing to monitor the situation.”

“We have notified Denbighshire County Council’s Environmental Health and Denbighshire countryside services of this issue and will continue to liaise with them during the incident.”

Denbighshire Council said, as the incident is under the jurisdiction of NRW it had “nothing to add at this stage”.

NRW is urging anyone with information on the spill to call its incident hotline on 0300 065 3000.