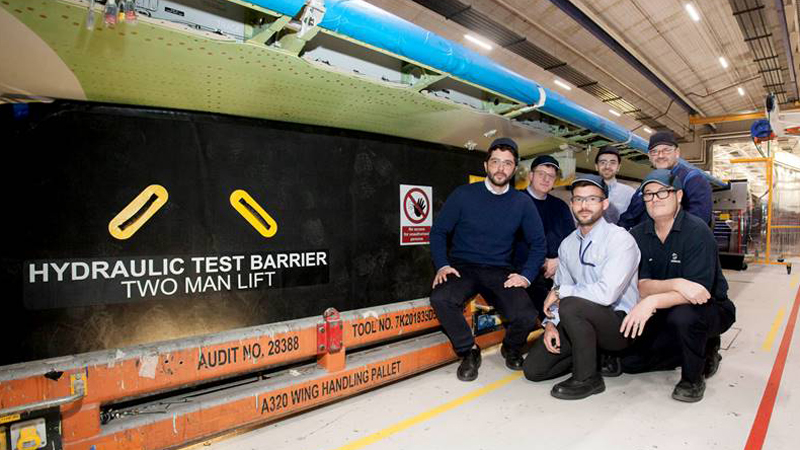 A Cranfield University Research Fellow based at Airbus Broughton, has come up with an idea to keep operators safe while speeding up aircraft production.

José-Angel Gonzalez-Domingo works with the Manufacturing Research and Technology team at Airbus, he was asked to improve the installation process for hydraulic systems during A320 wing production.

José is part of the team working with Cranfield’s Professor Phil Webb, the Royal Academy of Engineering and Airbus Chair in Aerostructure Design, which is dedicated to research on optimising assembly processes, to deliver benefits to Airbus and across the aerospace industry.

“First, I looked at making the hydraulic tests quicker, but realised they were already very well optimised,” said José, “Instead, I came up with an idea that would allow operators to keep working safely on the leading edge of the wing during the testing by using a simple barrier system with an inflatable device for rapid deployment.”

The inflatable barrier, nicknamed the ‘bouncy castle’, was introduced on the shop floor in August 2018 and is now saving over seven hours in the cycle time of the whole wing manufacture.

It has also mitigated the need for construction of contingency bays – bays that had to be built to increase the production of A320 – saving over £2.1million.

The project has taken two years from idea to implementation and was a collaboration between AirbusResearch and Technology, Cranfield University and Airbus Systems Test Group.

“Before the inflatable barrier, no one could work on the wing while the hydraulic tests were being carried out, as there is corrosive fluid inside the wing pipeline.” explained José.

“The tests would take around 12 hours, which was a huge amount of production time to lose.”

By putting a barrier under the leading edge to create an isolated area, operators could continue to work safely. “The barrier is quick and easy to install,” said José. “It inflates within 30 seconds and adapts to the shape of the wing, providing an airtight seal.”

The barrier uses a combination of telescopic screen trolleys and an inflatable wall placed under the wing, which connect to the conventional barriers and protect operators from any hydraulic fluid leaks that occur when the wing is under pressure.

Shop floor operators were at the centre of the design process for the barrier – and their feedback since it has been implemented has been very positive.

Cranfield has a well-established relationship with Airbus supporting research and development and working alongside their engineers.

They are one of the original investors in the University’s award-winning AIRC (Aerospace Integrated Research Centre).


Tweets by Deesidedotcom
Wednesday May 25th 17:02