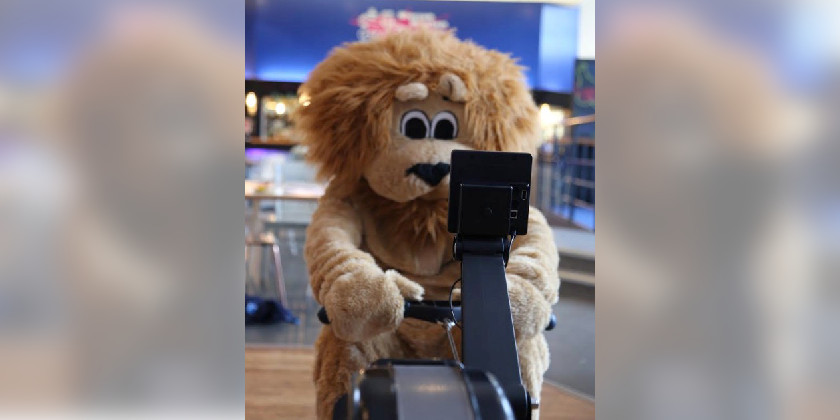 Students at Wrexham Glyndwr University have rowed the length of Wales to raise funds for charity – without leaving their student union.

Five rowing machines were set up in the Students’ Union’s Lazy Lion bar on the university’s Plas Coch campus and over a twelve hour period students, lecturers, university governors and more each took turns in a series of fifteen-minute slots to row as far as possible.

Rowers were sponsored and donations were taken on the day to help raise money for the Counselling Hub, a mental health charity based in North East Wales.

In total, rowers racked up 229 miles – further than the distance between Holyhead and Cardiff – and raised almost £400 for charity in the process.

Wrexham Glyndwr Students’ Union President Kieran Irwin – who took part in the rowathon dressed as the union’s mascot Glyn – thanked all those who took part and donated during the day.

He said: “As part of my year as WGSU President, I’m working to develop a number of different initiatives around mental health – both in the university and in our wider community. When the organisers of the rowathon contacted me with their idea, I was more than happy to work alongside them to help put the event on – and it turned out to be a real success.

“It was great to see so many of our students join in – and to see the support from staff and governors too – with even our Vice-Chancellor taking a turn on a rowing machine! I’d like to thank everyone who took part or donated for their support – and for making the day so enjoyable.”