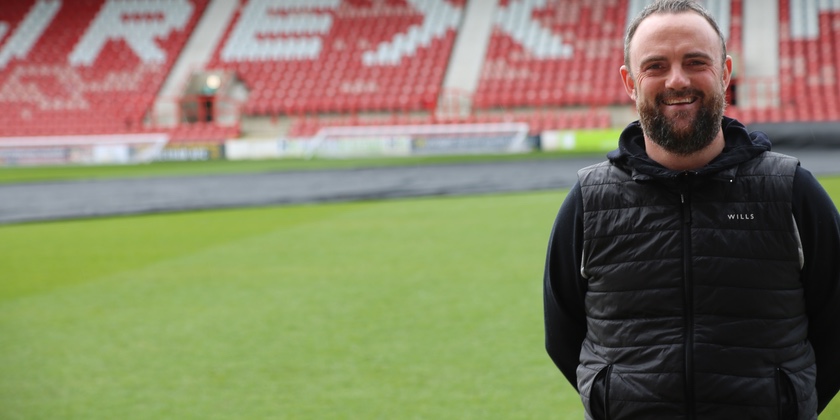 A Wrexham Glyndwr University lecturer is embarking on a footballing adventure this summer after guiding his team into Europe.

Alongside his role as Lecturer in Football, Coaching and Performance Specialist at the university, Chris Hughes doubles up as manager of Powys-based Newtown AFC, in Wales’ domestic league, the JD Cymru Premier.

At the end of May, Newtown gained qualification to the Europa Conference League, an inaugural UEFA competition launching this summer, after a thrilling 5-3 play-off final win at Caernarfon Town.

It is the second time Chris has guided Newtown into European competition since taking charge in 2013, having previously experienced the Europa League qualifying stages in 2015, beating Maltese side Valletta before taking on Danish giants FC Copenhagen.

Chris, who lives in Denbighshire, says he is relishing the opportunity of another European adventure with other clubs involved in the early rounds drawn from countries such as Latvia and San Marino.

He said: “We’ve got a tight turnaround. The draw is on June 15 so just under two weeks away and the first game will be on July 8 so we’ve got a lot of things to sort out – obviously player medicals, Covid tests, some friendly games to prepare. It’s been a busy few days.

“Up until now it was a case of just focusing on Caernarfon and going from there. We were second from bottom in the table pre-lockdown, so first and foremost the aim when we returned from lockdown in the first week of March was to get out of the bottom two.

“We were still nine points adrift of the play-off place after 22 games so that’s a lot of ground to make up, a nine point gap over 10 games, but we made it up quite quickly over Haverfordwest and it was just a case of maintaining that.”

To qualify for Europe, Chris’s Newtown side overcame Penybont in the play-off semi-final, and Caernarfon Town in the final, both tough away games even without fans present due to Covid measures.

Having gone behind 1-0 at Caernarfon, the Robins went into a 2-1 lead only to see the hosts go 3-2 up in the second-half. But a strong finish to the game saw Newtown fight-back to win 5-3 with three goals in just seven minutes, in what was a nerve-shredding finale for Chris.

He said: “I’ve had a lot of people comment to me in the week and on social media about how good the game was to watch, but it didn’t feel like that to me on the touchline!

“Even though there were no fans in, there were Caernarfon fans at every vantage point outside the ground and they still made a good atmosphere.

“Coming into the game there were banners for them all around the town, roadside and all sorts.”
Chris and his players now face the logistical challenge of juggling their day jobs with preparing for a taste of top-level European football, with at least a home leg and away leg to prepare for in the first round next month – something which will not be easy.

He said: “We’re a part-time club, part-time players, I’ve obviously got the role within the university – I’ve had some really nice messages from the university, everyone’s been really good.

“Hopefully everyone’s employers let them have a couple of days off – we’re not sure yet if it’s going to be July 8 or July 15 when we’re away but it gives us a month to let everyone know.

“Then we have to sort out the schedule, the itinerary. Driving home on Saturday I was thinking about recruitment, retention (of players), planning, I didn’t give myself a lot of time to enjoy it but I did have a celebration with my family over the weekend.

“We’ve got to get our squad list to UEFA by the middle / end of June so everything we need to do, we have to press fast-forward on. Our first pre-season friendly is June 19! The players will have just under two weeks off.

“I’ve told the players to enjoy every minute because I’ve been involved in football a long time and very rarely do you get a season where you’re winning trophies or playing in Europe.

“We’re not a club with big resources to get into Europe so to do it twice in six years is brilliant.
It’s another huge achievement for everyone at our football club.”

More information about the BSC (Hons) Football Coaching and the Performance Specialist Course at Wrexham Glyndwr University, can be found here.