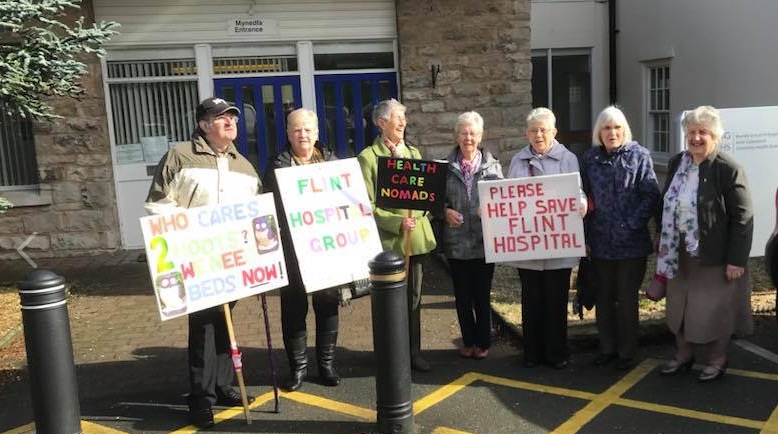 A campaign group that tried to stop the controversial closure of Flint hospital has started to protest again over frustrations with how older people in the town are being dealt with by health authorities.

Members of the Flint Hospital Campaign picketed Wednesday’s meeting of the Betsi Cadwaladr University Health Board in Mold.

The community hospital in Flint was shut by the board in 2013 following a long campaign to save it.

Protesters started petitions, held rallies and even had a local referendum to try to keep the hospital open.

But members of the group have grown frustrated with how care is delivered for the elderly in the  town since the facility was shut.

Campaigners complained that some people in Flint have been sent as far away as Ruthin to get treatment.

“We used to regularly come to attend and see what was going on with the health board. We’ve spoken to the health board for a number of years to try to resolve the Flint hospital issue.

We thought that we had been making good progress recently but there is a frustration locally about the way older people are being treated.

Where their care is being delivered far away from home. So we are today telling the health board that we are going to re-start our campaign to resolve the beds issue at Flint.”

He added: “The action that we’d like the health board to take is to deliver on the promises that they make. They talk often about delivering care closer to home but in Flint they have done the direct opposite, they’ve closed a well used, well loved, well resourced facility and the result of that is that older people from Flint are being treated where ever a bed becomes available.

That could be in Glan Clwyd where the cost of treatment is six to seven times higher than Flint and we’ve even had patients that are being pushed out to the periphery as far as Ruthin.

We just want the health board to deliver on it’s vision which is delivering care closer to home because we know in Flint they’ve done the opposite. And it’s costing more and delivering less.”

“I was very happy to meet the members of the community this morning and to have the chance to listen to their concerns. We are doing our best to provide good, modern healthcare for the people of Flint.

This year beds have been identified in Holywell hospital for patients from Flint. In April, we opened a brand new £5 million Health and Wellbeing Centre which brings new services to the community enabling lots of different types of care to be brought closer to the community such as heart failure clinics, audiology and physiotherapy service.

“We have also placed additional funding with our local community resource team which gives our nurses additional resources to be able to help patients within their homes.”