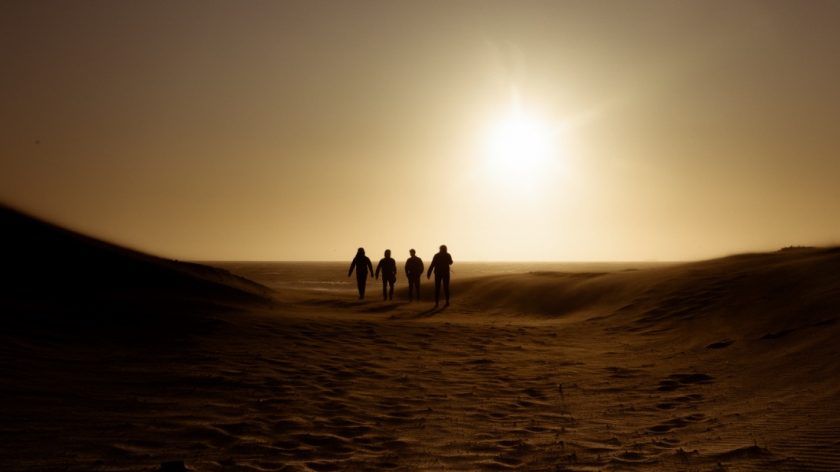 The Met Office has issued an Amber weather alert for extreme heat as temperatures rise throughout the week.

The extreme heat warning – in force from Thursday until the end of Sunday – covers a large part of eastern Wales and the southern half of England.

Eleven counties in Wales fall under the alert including neighbouring Wrexham, though not all of it.

Flintshire sits outside of the alert area however, the Met Offices’ own forecasts indicate the same or higher temperatures for Hawarden over the four-day period, than the eleven Welsh counties in the alert area.

Cheshire West and Chester also fall under the same alert and again, forecast temperatures for Hawarden are higher as the graphic below shows. 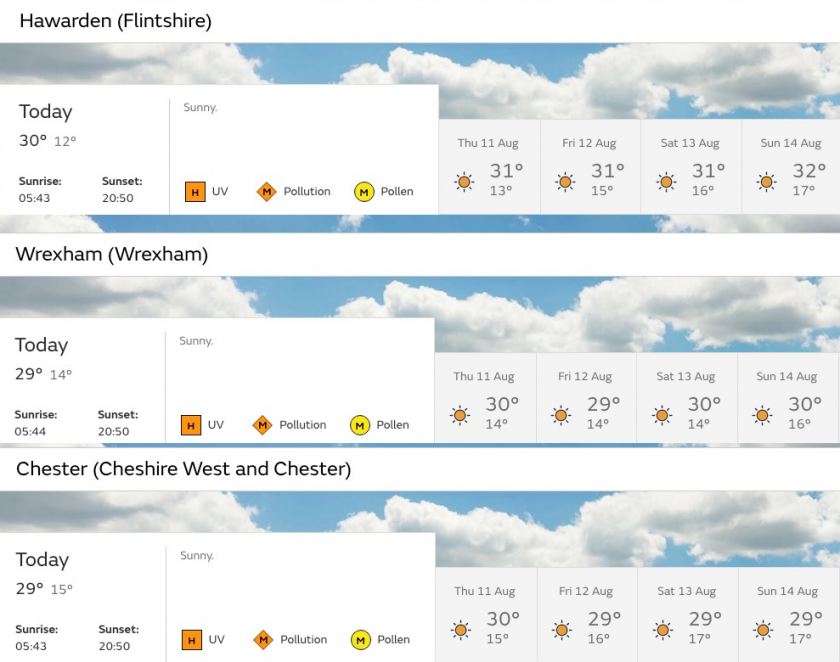 It’s a point picked up by Twitter user @findlifepurpose, who asked the Met Office: “Why is Wrexham covered by the Amber warning and yet Hawarden isn’t? Both are forecasted to have similar temperatures. This amber warning makes no sense….”

Met Office Katie replied:“Warnings aren’t based purely based on temperature thresholds, also the duration of the extreme weather, and possible impacts the weather can have.”

Flicking through the forecast for the relevant counties it shows that temperatures in Hawarden will be either on a par or higher over the four-day heatwave period.

Twitter user @findlifepurpose wasn’t impressed with the answer, responding to Met Office Katie, they said: “This still doesn’t explain why Wrexham is covered by the warning but Hawarden is not. The forecasts show similar temps for the same length of time. Surely the impact is no difference between these two places??”

In response, Met Office Katie said the reason why the amber warning had not been extended as far as Hawarden was because it is “closer to the coast so there’s a lower confidence in the higher temperatures occurring there due to sea breezes.”

Katie added: “Wrexham’s a city, so there is higher confidence, and the heat may have a greater impact on infrastructure. These factors all affect the warning area.”

Our colleagues at Wrexham.com noticed Katie’s reply and the fact that one downside to Wrexham’s new found city status is that it will be more prone to the impact of hot weather.

Downside to city status – hot weather affects us more 😂 “Wrexham’s a city, so there is higher confidence, and the heat may have a greater impact on infrastructure” – is there even a measurement in town?! https://t.co/LgN1IDlXJN

We asked the Met Office about the Amber warning and why Flintshire was not included, in short, it’s not just about heat, there are other factors at play.

A spokesperson kindly took the time to explain: “The warning area will have been kept away from the Irish Sea coasts as temperatures here are not expected to reach the higher values anticipated within the centre of the warning area.”

“However, all areas of England will be subject to high temperatures, but it is just that the warning area contain those values more likely to cause impacts.”

“It should be noted that the Amber extreme heat warning works in parallel with the Heat Health Alert which currently covers all of England with a Level 3 warning.”

“This is intended for health professionals and those who care for elderly or young children or who have conditions which may be severely affected by the heat.”

“So in summary, the Amber alert has been drafted to encompass those areas where impacts are most likely from extreme heat, but all of England is covered by a Level 3 Heat Health Alert.”

A new Wales record-high temperature of 37.1C recorded was recorded at Hawarden Airport on July 18.

The August Welsh temperature record is also held locally, the mercury hit  35.2°C, on 2 August 1990, it was recorded at Hawarden Bridge in Shotton.

Why are Met Office temperatures recorded in Hawarden?

Specific temperatures quoted from the Met Office have come from weather stations that meet specific criteria including one which is situated within Hawarden Airport.

These weather stations are regularly maintained and inspected by specialist teams.

Within these official weather stations, thermometers are housed in a white slatted box with its door facing north, called a Stevenson screen.

This keeps the thermometer away from direct sunlight but the airflow constant and ensures consistency of readings across the UK.

The locations of these boxes are also standardised, being mounted 1.25m over level, grass ground and at least 20m away from concrete or hard-standing, and only half of the area within a 100m radius should be formed of man-made surfaces.

National Highways Head of Road Safety, Jeremy Phillips said: “It is always very important to plan ahead for your journey and this advice remains the same during periods of hot weather. When hot weather is forecast, please remember to take plenty of drinking water with you – enough for you and your passengers. You can visit our website to find out more information about travelling during hot weather.

“We also advise everyone should check their vehicles, such as tyres, coolant and oil levels, before heading out.”

Last night we were called to 11 incidents of controlled burning – following on from the Amber Weather warning issued by the Met office, our Head of Fire Safety, Dave Hughes, is asking everyone to avoid burning or having campfires during the current hot and dry weather conditions pic.twitter.com/arnIlra3xF

Dr. Justine Shotton, President, British Veterinary Association, said: “Whilst it’s wonderful to make the most of the warm weather, please don’t forget to give some extra attention to pets, many of whom may struggle as the temperature rises. Animals need extra care during the summer to keep them safe from heat-related illnesses such as heatstroke, heart conditions, breathing difficulties and sunburn, many of which can sadly be fatal.

“Make sure animals have access to fresh drinking water, good ventilation and shade from direct sunlight at all times. Dogs especially can overheat easily, so make sure they aren’t walked or exercised in the hottest parts of the day or left inside a hot car or conservatory for even a little while. Keep an eye out for early signs of heatstroke, such as heavy panting, drooling, restlessness, and lack of coordination and contact a vet immediately in case you have any concerns.”

In very hot weather take extra care to follow the health advice and protect yourself and others. It’s important to know the symptoms of heatstroke.

If you are concerned about symptoms, contact your GP or NHS 111 Wales. Call 999 if you think someone has heatstroke. pic.twitter.com/2632GMfItj