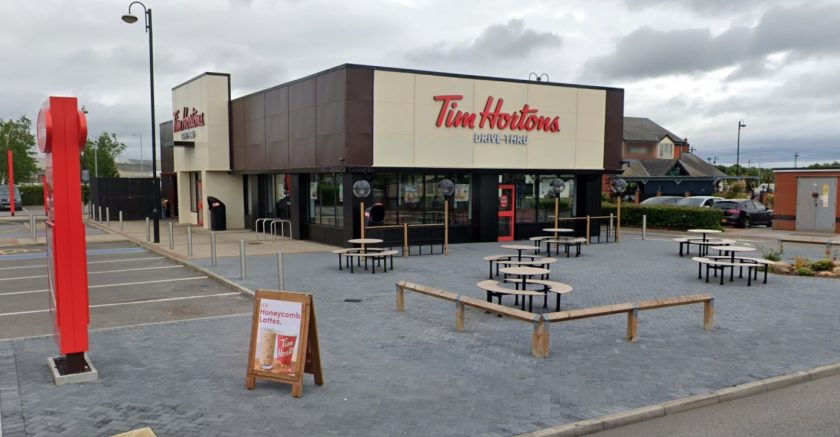 A fast food chain’s plan to open its branch on Broughton Shopping Park 24 hours a day has been met with strong opposition by people living nearby.

Canadian firm Tim Hortons, which is well-known for its range of coffee and doughnuts, opened its first restaurant in North Wales at the retail park in December last year.

The drive-thru outlet is based in the former Carphone Warehouse store and currently has permission to open from 6am until 11pm every day of the week.

It is now seeking approval to change its licence to serve food and drink to customers through the night, seven days a week.

However, neighbours have raised concerns that it will cause noise issues and attract boy racers.

It comes after residents claimed they had experienced similar problems relating to the nearby McDonald’s restaurant, which already has 24/7 opening hours.

In a letter to Flintshire Council said: “The reason for this objection is not only the safety of pedestrians as large trucks and lorries park outside my house on the kerb to go there in the evening, making it impossible to walk safely down the street and very unsafe to cross the 30mph road that boy racers use as a racetrack.

“It’s also the noise this will cause myself and my family who live opposite this premises.”

Some objectors have raised concerns about alcohol being sold at the restaurant, but the company has made clear that no alcohol will be available.

North Wales Police and the local authority have not raised any issues with the application.

In a report to councillors who are due to decide on the plans, a council official said police had received few reports of crime in the area.

Andrew Farrow, chief officer for planning, environment and economy, said: “North Wales Police were asked to comment on the points made in the letters of representation concerning anti-social behaviour and public order.

“They confirmed that since 2022 there has been one incident relating to Tim Hortons and that was a concern for safety and not actually related to the premises itself.

“The only other event in the area related to an incident at 11pm on McDonald’s car park involving two cars and when security was called, but they could not see any cars and did not know of any.”

A decision will be made on the application at a meeting of the council’s licensing sub-committee being held on Thursday (June 30, 2022).