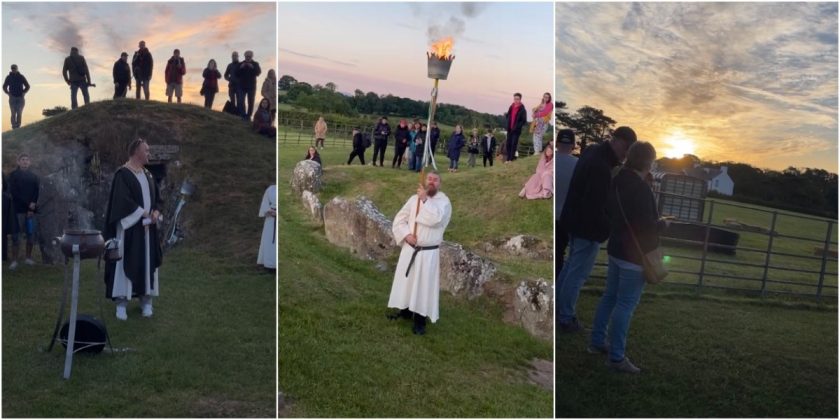 Members of the Anglesey Druid Order led celebrations of the summer solstice at Bryn Celli Ddu near Llanddaniel this morning.

The summer solstice marks the official start of summer. It brings the longest day and shortest night of the year for the 88% of Earth’s people who live in the Northern Hemisphere.

Druids gathered at the Iconic Neolithic tomb –  the Mound in the Dark Grove –  to greet the longest day.

The dawn ceremony – the first summer solstice back for two years due to the pandemic – saw a bowl of fire lit to emulate the power of the sun, and Druids made offerings to the three realms of land, sea and sky.

Bryn Celli Ddu is probably the best-known prehistoric monument on Anglesey, the tomb is accurately aligned to coincide with the rising sun on the longest day of the year.

At dawn on midsummer solstice, shafts of light from the rising sun penetrate down the passageway to light the inner burial chamber.

The summer solstice – a term derived from Latin and means ‘the sun stands still’ – it marks the start of the astronomical summer and is the longest day of the year.

The sun rose in Flintshire at 4.44am and will set at 9.43 pm – from Wednesday days will get begin to get shorter as we go through the summer months.

The astronomical summer lasts until the autumnal equinox, which this year lands on Friday 23 September.

In a year there are two equinoxes (spring and autumn) and two solstices (summer and winter).

The dates of the equinoxes and solstices aren’t fixed due to the Earth’s elliptical orbit of the sun.

The Earth’s orbit around the sun means that in early January, the sun is closest (known as perihelion) and in early July it is most distant (aphelion).

There are two definitions of when summer starts, these depend on whether you are using the meteorological or astronomical definition of the seasons.

Meteorologists define seasons based on climatic conditions and the annual temperature cycle.

It is important for them to be able to compare the same period of time in different years.

Meteorological summer is generally defined as the three months of June, July and August, with the season starting on June 1 and ending on August 31.