A494 Dee Bridge Renewal – What, Why and When

A blog by Neston-based Engineering Focus looks at the issue of the A494 Dee Bridge Renewal.

The A494 at the point where it crosses the River Dee carries over 60,000 vehicles per year and is a vital link which connects North West England with North Wales.

It also forms part of the TEN-T European transport network, linking ports to the East of England with the port of Holyhead. The road also provides employees who live in North Wales access to the Deeside Industrial Park, which is on the “English side” of the River Dee. Although technically the Industrial Park is on Welsh soil, with the border between England and Wales east of the River Dee close to the A550/A494 junction.

See this video on YouTube for an overview of the A494 from the junction with the A540, located to the west of the M56 (where the M56 becomes the A494), across the Dee bridge to Queensferry.

The bridge over the River Dee was constructed in the 1960s and carries almost double the number of vehicles that it was designed for, this has lead, according to the Welsh Government to “deterioration to some structural features”[1]. Therefore in 2018 it was announced that the bridge was to be renewed, with a public consultation held during summer 2018 which outlined the proposals.

As an important link carrying 60k vehicles per day it is vital that the A494 remains open, closing the section of road simply isn’t option. So the Welsh Government working with the North and Mid Wales Trunk Road Agency appointed Mott MacDonald and their partners Richards, Morehead & Laing to consider options for the replacement of the bridge.

The final proposal which was put to the public for consultation will see the construction of an all new 4 lane bridge crossing the River Dee to the south of the existing A494 bridge. Once the new bridge is complete, engineers will begin to remove and then replace the deck of the existing bridge. Once complete the 2 bridges will provide 3 lanes, plus a hard shoulder in each direction. The additional lane will provide entry and exit from the A548 and Queensferry junctions, this will give drivers more time to merge onto or leave the A494 and help to remove a current pinch point. 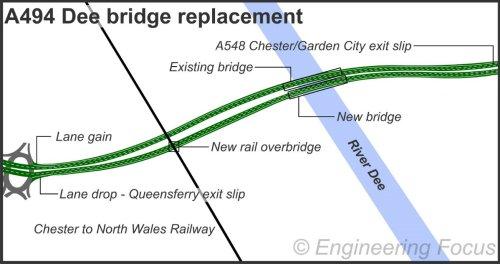 The alignment of the A494 on the “English side” had already been altered in 2004 as part of the A494 “Dome Corner” upgrade undertaken by Highways England. The alignment change was to allow for an increased number of lanes which would have crossed the River Dee and continued up Aston Hill to the junction with the A55. However after strong opposition from local residents the plans to widen the A494 were cancelled by the Welsh Government in 2007.

The proposals for the new bridge will make use of the altered alignment with the bridge built to the south of the existing bridge. A new section of road will also be constructed west from the new bridge, underneath the Chester to North Wales railway, ending at the junction for Queensferry. Once complete the new bridge and re-decked existing bridge will provide additional benefits for motorists, by providing the 3rd lane and by providing a hard shoulder for motorist should they get into difficulty whilst travelling on that section of the A494.

Building a new bridge was, in reality the only viable option. The construction of the existing bridge is such that it is not possible to work on either side of the carriageway at a time, whilst trying to keep at least 1 lane of traffic open in each direction. Also the idea of keeping only 1 live lane open in each direction would have been unthinkable, given the volume of traffic that currently use the crossing. 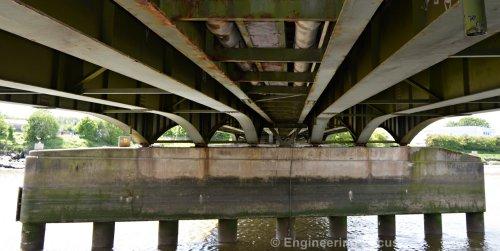 Underneath the current bridge

Building a new 4 lane bridge allows for 2 lanes of traffic in each direction to continue to cross the River Dee while work is carried out on the existing bridge. It also makes sense to retain and re-deck the exiting bridge, which apart from the deck is still structurally sound. Putting both sets of work into a single package will allow, not only for the renewal of the bridge but an upgrade of the crossing, which should in itself help to improve the business case for the proposal as a whole.

Work is expected to begin during Summer/Autumn 2020, subject to Ministers’ approval. I wasn’t able to find out if a completion date has been set, however I would estimate a project of this scale would take at least 18 months, possibly up to 30 months to complete.

It is unfortunate that the urgency of the work means that it will have to take place before work commences on the so called “Red Route”, which will see much of the traffic that currently uses the A494 Dee crossing using a new route. The Red route will make use of the exiting A548, the Flintshire Bridge which was constructed 1998 and a new section of road linking the A548 at Connah’s Quay to the A55 close to Pentre Halkyn. Work on this £250m proposal is not due to commence until 2025, subject to approval from Welsh Government.

Wrexham-Bidston Rail Users’ Association commented: “With the A494 Dee bridge renewal due to commence next year we believe it is important that commuters are made aware of option they have to use the Wrexham-Bidston line in order to get from England to North Wales and vice versa.

“It is also vitally important that services remain reliable so that commuters feel they are able to rely on the Wrexham-Bidston line whilst work is underway.”