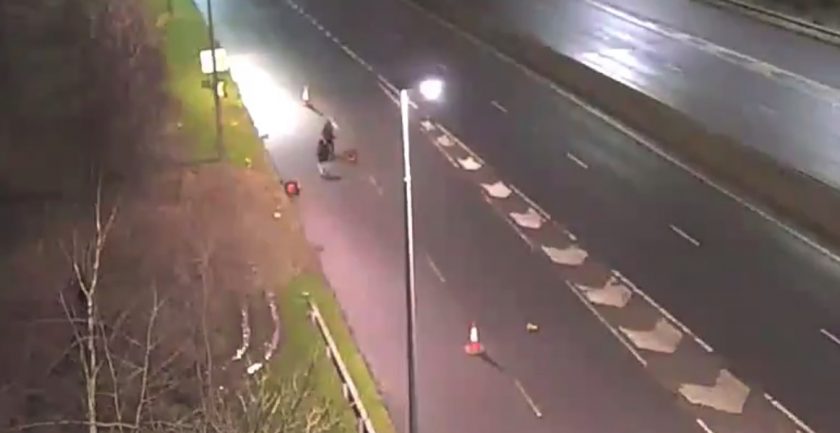 Two youths spotted kicking cones into the road along the A494 on Aston Hill could have caused a serious collision.

Traffic Wales, the Welsh Government’s traffic information service captured footage of the youths on a CCTV camera close to the Ewloe entry slip on A494.

It shows them walking along the carriagway kicking cones towards the live lane as cars speed along the eastbound A494, in the early hours of Monday morning.

In an update on social media, the traffic agency tweeted the video and said:

Below 👇 we have captured cones intentionally being moved causing an obstruction to the carriageway and potentially causing a serious collision.”

The cones have been in place since the end of January, they are sectioning off a part of the slip road carriageway as work to widen a footpath – which runs alongside the A494 at Aston Hill – takes place.

An order was made to “temporarily prohibit” all pedestrians and cyclists from “proceeding on the length of footway” alongside the A494 near Aston Hill” according to a Welsh Government notice posted nearby. [Link to order document]

The A494 trunk road – footway running alongside – is the responsibility of the Welsh Government who is funding the upgrade work.

The work will be carried out in phases on the pathway from Ewloe roundabout for ‘690 metres’ towards Queensferry.