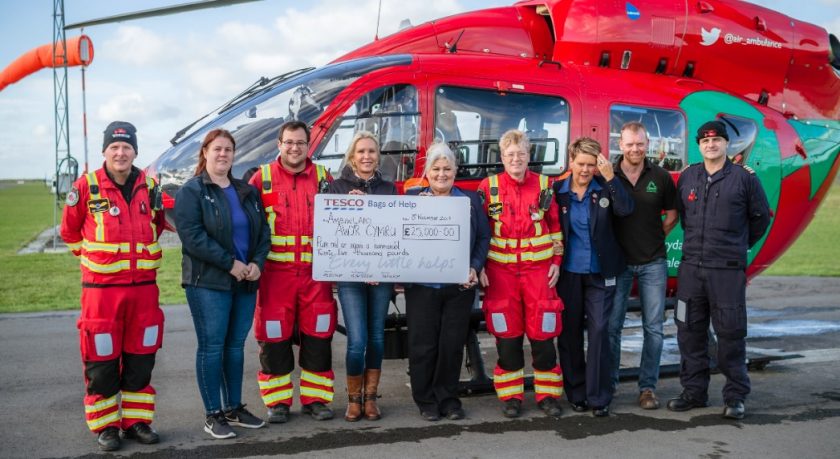 To celebrate Tesco’s centenary, the supermarket teamed up with Groundwork to deliver a special voting round of its community funding scheme which saw grants of £25,000, £15,000 and £10,000 awarded to community projects.

In the North Wales region, three worthy charities were shortlisted to receive the cash award. Shoppers were invited to head along to their local stores and vote for who they thought should take away the top grant.

Each year, the four helicopters attend on average 2,500 missions and since 2001 the air ambulance charity has responded to over 30,000 emergencies.

The Charity, which has one of its four bases in Caernarfon, is funded purely by the people of Wales and receives no lottery or direct government funding. Each year, the Charity has to raise £6.5 million to sustain the lifesaving service.

Wales Air Ambulance North Wales Fundraising Manager, Lynne Garlick said: “We are over the moon to be awarded this incredibly generous amount. Throughout late summer and autumn, we kindly asked the people of North Wales to vote for us whilst they were grocery shopping at their local Tesco.

The unwavering support of the people across North Wales has helped us secure this amazing sum of money. We cannot begin to thank everyone who voted for us and also Tesco for their incredible support.

“In 2018 alone, Wales Air Ambulance responded to over 1,100 missions across North and Mid Wales, accounting for almost 50% of the total number of missions we attended that year. Having the support of the shoppers across North Wales has ensured we are able to be there for people when they need us most.”

Tesco’s Bags of Help project has already provided over £75 million to more than 25,000 projects across Britain.

Geraint Hughes, a Tesco Enabler for Groundwork North Wales traveled to Tesco stores across the region to provide the grants for all the charities and to Caernarfon to present the cheque to the Wales Air Ambulance at the group’s base.

Keith Jackson, Tesco’s Bags of Help Manager, added: “Congratulations to the recipients of our first Centenary Grant voting round. They are all worthy winners and we hope these awards help them continue their important work in our communities.

“In 2019, we are celebrating a century of delivering great value for our customers. And what better way to celebrate this occasion than by using our flagship community grant scheme, Bags of Help to support even more groups and organisations who are helping to make a difference across Britain.”