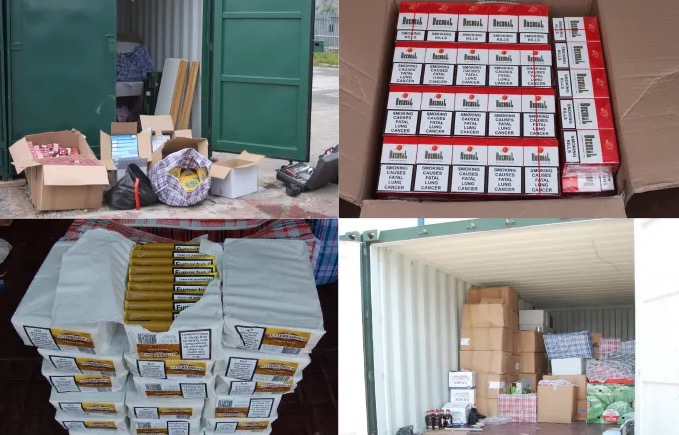 A pair of shopkeepers caught with more than 1.2 million illegal cigarettes, 300 kg of tobacco and nearly 6,000 litres of alcohol have been jailed.

Wrexham-based Hallmat Mahmood, 33, and Dara Ahmed, 36, were arrested after HM Revenue and Customs (HMRC) investigators found the products, which were worth £468,182.38 in unpaid duty, in storage units, a flat and a car.

Mahmood and Ahmed claimed they only stored legitimate items in the storage units and the illegal goods belonged to a friend who they allowed access to just five days earlier.

HMRC investigators found more tobacco and cigarettes in Mahmood’s vehicle when they arrested him, but he insisted they belonged to another friend and he was just delivering them for him.

More illegal goods were found in a flat above the pair’s shop, which was owned by Mahmood and run by Ahmed.

“Mahmood and Ahmed constructed a web of lies to try and cover up their illegal operation, which undercut honest, hard-working retailers who do the right thing. Now they’re paying the price for their actions.

“I would urge anybody with information about individuals or businesses involved in tax fraud to report it to HMRC online or call our Fraud Hotline on 0800 788 887.”

Ahmed was sentenced to six months in jail on the same day after being responsible for £191,000 of the fraud.

A Range Rover owned by Mahmood was seized and sold at auction and further confiscation proceedings are underway.