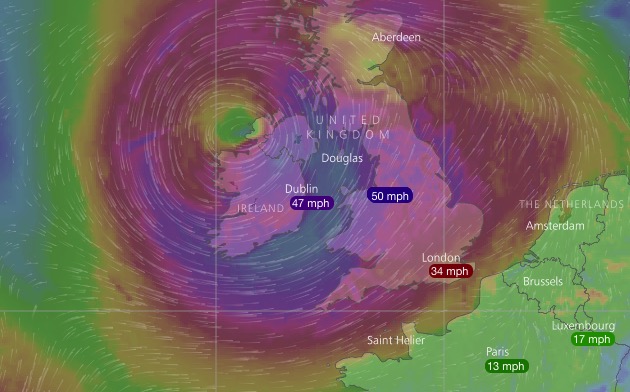 Wind gusts of over 50mph are forecast in Deeside tomorrow afternoon with a yellow weather warning from the Met Office covering the county.

The weather warning has been put in place due to ‘ex-Hurricane Ophelia’, with large parts of the country expected to hit by strong winds tomorrow afternoon.

Ireland is set to get the worst of the weather, with an amber warning in place.

Details released by the Met Office state: “A spell of very windy weather is likely on Monday in association with ex-Ophelia. Road, rail, air and ferry services may be affected, with longer journeys times and cancellations possible.

“Power cuts may occur, with the potential to affect other services, such as mobile phone coverage. Some damage to buildings, such as tiles blown from roofs could happen, perhaps leading to injuries and danger to life from flying debris.

“Coastal routes, sea fronts and coastal communities may be affected by spray and/or large waves.

The warning has been updated to extend the area at risk further east, taking in much of northern England and Wales along with parts of southern an

The weather warning is in place from midday Monday until around midnight.

Passengers are advised to check the Arriva Trains Wales website ahead of travelling tomorrow.