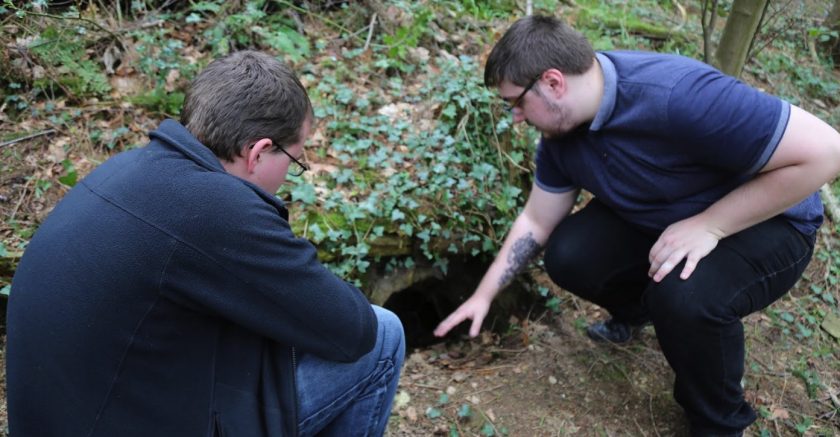 A group of students based at the Northop campus of Wrexham Glyndwr University have been shown how to find tracks and signs left by badgers on a field trip.

The field trip – in the Flintshire countryside around the Northop campus – showed students how to detect signs that badgers were in an area, including the mammals’ use of paths, indicators such as fur and markings, as well as sett entrances and exits.

It was led by student Josh Lambert, from Connah’s Quay, who is running a research project into the lives of urban and rural badgers in Flintshire as part of the third year of his Animal Studies BSc. He said:

Work like that has really helped with my third year project looking into the differences in the lives of badgers in Flintshire.

I’ve used skills such as looking at field signs alongside a camera trap – which is gathering some really good footage to show us what badgers’ lives are like!”

Badgers are not the only creatures Josh’s project has captured on film – one evening recently a polecat was captured as part of his recording.

“Developing your knowledge of field signs is an extremely useful skill for our students – and for anyone who wants to know more about our British wildlife.

It is one of the skills we will be teaching as part of our Introduction to British Wildlife Course, which launches at the Northop campus on May 14.

The course is aimed at anyone who wants to find out more British wildlife – why we have the species we do, how they have changed over time – and how to spot the signs they leave as they live their lives.

It’s led by experts in their field, and over six evening weekday sessions and three weekends, participants will get the chance to build their knowledge of our wildlife – both in the classroom and out in the field.”

To find out more about the course, and to book your place, please visit: https://www.glyndwr.ac.uk/en/ShortCourses/IntroductiontoBritishWildlife/