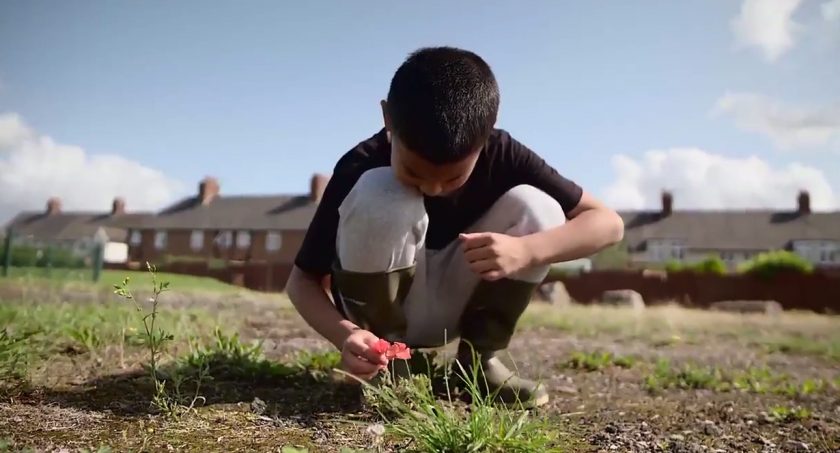 Five children from Deeside have taken on starring roles in a video for a national environmental campaign, Backyard Nature, which has been backed by HRH The Duchess of Cambridge.

Amelia Davies, aged 7, Elise Jones, 7, and Lilly-Mae Davies, 10 from Garden City, Cole Davies, 8 from Mancot and Matthew Stevens, 10 from Ewloe star in the video which has been viewed over 53,000 times on Twitter after it was shared by the official Kensington Palace Twitter account.

The children were chosen to star in the video to launch Backyard Nature’s first mission to Save the Bees.

It features the children having fun playing outdoors, planting wildflower seedballs and taking care of nature in their own backyards.

The filming took place during the summer holidays in Kingsley Road, Garden City.

Following the July launch of Backyard Nature campaign by Semble, the UK’s leading organisation for grassroots community projects, children are being asked to help stop the decline of bees in the UK by helping to plant wildflower seeds across the country.

The campaign was welcomed by Her Royal Highness The Duchess of Cambridge who said: “Spending time in nature can play a pivotal role in helping children grow up to become happy, healthy adults.

“The great outdoors provides an open playground for children to have fun and learn lifelong skills – from balance and coordination to empathy and creativity – with their friends, their parents, their carers, or their family members.

“I hope the Backyard Nature campaign inspires children, families and communities to get outside and engage with nature, wherever they live.”

The @BackyardNatUK campaign, backed by The Duchess of Cambridge, aims to plant 15 million seeds in the UK to halt the sharp decline in bee population 🐝🌼

97% of the UK’s wildflower meadows have disappeared in the last 80 years, leaving bees with less to eat, and a third of the species of British wild bees and hoverflies are in decline.

Without bees, many food production industries would collapse, causing widespread economic hardship and possibly famine until alternative cultivation systems and crops could be developed.

More than 330,000 wildflower seedballs were be handed out for free in Iceland and Food Warehouse stores nationwide last week.

The seedball packs, which contain over 15 million seeds in total, will also be accompanied with information about how and where best to plant the seeds. The objective is to expand the habitats for bees, which help to produce one third of all the food we eat.

Richard Walker, managing director of Iceland and trustee of the Iceland Foods Charitable Foundation, which is funding the campaign, said: “Bees are an integral part of our ecosystem and provide a vital pollination service to UK crops. These wonderful creatures are quickly disappearing and they are in desperate need of more places to live and eat.

“Seedballs will be available free of charge to members of the community visiting our stores on 14 September. Once grown, these wildflowers will provide much needed habitats for bees, helping them to survive and thrive again.”

The campaign is supported by major campaign groups and conservation charities including the Bumblebee Conservation Trust, Plantlife and The Wildlife Trusts, as well as family activity app, Hoop.