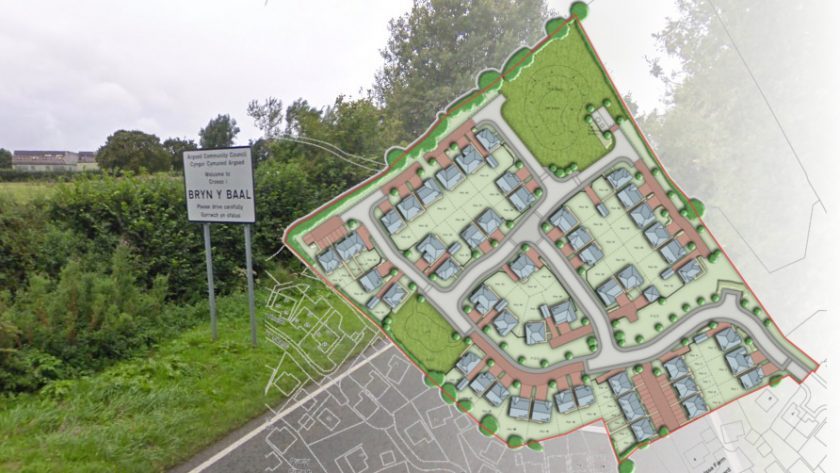 Stalled plans to build almost 60 new homes near Mold have been backed for approval.

Bloor Homes was originally granted permission to a total of 59 houses on land at Issa Farm in Bryn y Baal following a planning appeal in June 2016.

However, the firm later pulled out of the development despite being granted a two-year extension by Flintshire Council.

The scheme has now been taken on by Denbighshire-based developers MacBryde Homes. who applied to make changes to the type of houses on the site in the autumn.

The plans have now been backed for approval by council officers.
Chief planning officer Andrew Farrow said it would allow a contribution of more than £170,000 to be secured towards improvements to Mynydd Isa Primary School.

In a report, he said: “Following refusal of the previous proposal by the local planning authority, the appeal was allowed by the inspector as it was considered that the proposal was in accordance with the principles and objectives of sustainable development.

“Eighteen months have elapsed since the appeal was allowed and the site has not yet come forward.

“The developer has expressed in their planning statement that the previous applicant has not progressed the site as the size of the development no longer accorded with their business model.

“There is no evidence to counter this statement and there is significant weight to be attached to the fall-back position of the approved scheme.

“As part of ongoing work on the 2018 Housing Land Monitoring Study, the new developer has been approached to establish the timescale for delivering the site and has advised that the site will be completed by April 2021.

“Given the relatively modest scale of development and the strong housing market area such a development timescale is realistic.”

When the proposals were first put forward they were strongly opposed by residents, who were concerned about the impact the development would have on roads and schools in the area.

More than 200 objectors signed a petition which was lodged with Flintshire Council underlining the issues raised.

But the development was approved on appeal by Welsh Government planning inspectors, who said the area had ‘good access’ to services.

Argoed Community Council has again asked the council to reject the application.

However, Mr Farrow said there were no grounds on which to do so.
The plans will be considered by the planning committee next Wednesday.