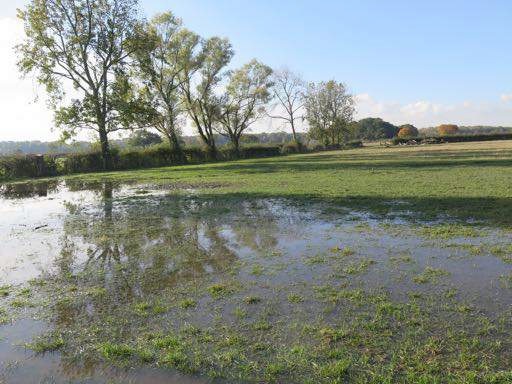 A solar farm measuring the size of more than 60 football pitches could be built straddling the Wales-England border.

Plans for a 30-megawatt development have been unveiled which would cross the boundary between Flintshire and Cheshire near the village of Bretton.

The proposed solar scheme would form part of a community energy project by YnNi Newydd (New Energy), a society which aims to deliver renewable energy installations across Wales.

The total site covers 49-hectares of agricultural land at Bretton Hall Farm and would require applications to be passed by both the Welsh Planning Inspectorate and Cheshire West and Chester Council to gain approval.

The society is initially seeking an opinion on whether an Environmental Impact Assessment (EIA) is required to accompany the plans.

A report submitted on their behalf by consultants Mabbett & Associates Ltd states: “The aim of the proposed development is to generate a source of clean, renewable energy to mitigate climate change and to provide benefits to the local community.

“The total generation capacity of the proposed development is 30MW.

“The application site lies within the administrative boundaries of both Flintshire County Council and Cheshire West and Chester Council, therefore spanning two local planning authority boundaries, but also the national boundary between Wales and England.

“The largest proportion of the application site area lies within Flintshire County Council, with a generation capacity of approximately 16MW.

“As this generation capacity exceeds 14MW, the proposed development within the Welsh boundary constitutes a ‘Development of National Significance’
The land, which is currently used for grazing animals, would be divided into six medium-sized fields and two smaller ones.

The development would see the installation of solar photovoltaic panels, fixed to a frame to form arrays with a height of no more than 4.6 metres.

Steps would also be taken to mitigate the risk of flooding by providing a clearance level of two metres above the ground.

The consultants said the scheme would provide an additional source of revenue for the landowner.

They added that they did not believe the application would need an EIA.

The report states: “As detailed throughout this EIA screening report, the proposed development is not likely to result in significant effects upon the environment, therefore it is considered that an EIA is not required.

“A number of mitigation measures have been identified throughout this EIA screening report which would be implemented throughout the construction and operation of the proposed development.

“Although it is considered that an EIA is not required, detailed technical and environmental assessments would be undertaken to support any future planning application.”

The application is currently available to view via the Flintshire Council website.

A screening opinion will be issued at a later date ahead of a formal planning submission.