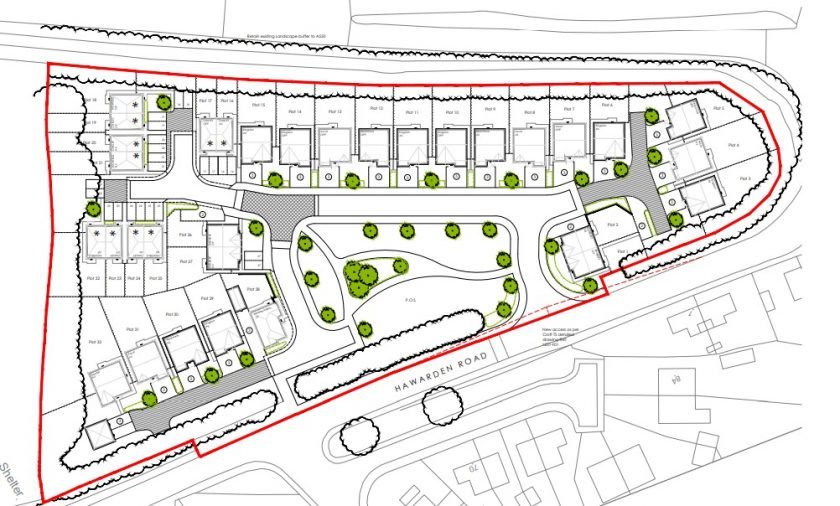 Renewed plans for more than 30 homes in Penyffordd have been backed for approval.

Permission for the proposals on land off Hawarden Road was granted by the Planning Inspectorate last year following a successful appeal.

It came after Flintshire Council originally refused the development in September 2017 amid concerns about overdevelopment.

The site has recently been taken on by Macbryde Homes, who want to keep the number of houses at 32, but change the style of them.

The local authority’s chief officer for planning has supported the amendments subject to a contribution of more than £110,000 being made towards improvements to Castell Alun High School.

In a report which will be considered by councillors this week, Andrew Farrow said: “Members should be aware that this site is subject to extant permission for a development of a form and scale consistent with the current proposal.

“I consider that because of this the main issues of principle have already been accepted on this site, for the reasons discussed in the decision of the planning inspector.

“As the trigger for the secondary school has been exceeded contributions will be sought through a Section 106 agreement.

“This contribution has been calculated on the number of pupils that the development generates.

“The proposal provides that of the 32 dwellings proposed there are 10 affordable dwellings.”

Access to the site would be via a new entrance off Hawarden Road.

The original application prompted 165 letters of objection from residents concerned about the overdevelopment of the village, which would they said would change its character.

However, in his report planning inspector Clive Nield said the proposed development would have a negligible effect on the area.

In a planning statement, representatives from the St Asaph-based firm behind the development said the latest application would be for the same number of houses with a similar layout to the existing consent.

They said: “The purpose of this application is to reflect the changes in house types and minor layout changes to reflect the fact that the site is now under an option to MacBryde Homes Ltd.
“The proposal has been found to amount to sustainable development by a Planning Inspector.

“There has been no material change in policy or physical circumstances since that decision was made.

“In these circumstances national policy is clear that planning permission should be renewed.”

The application will be considered by planning committee members at a meeting on Wednesday.